AG Barr Proves Himself To Be A Major League Swamp Creature

Report: DOJ Investigation into ‘Unmasking’ Ends with No Charges 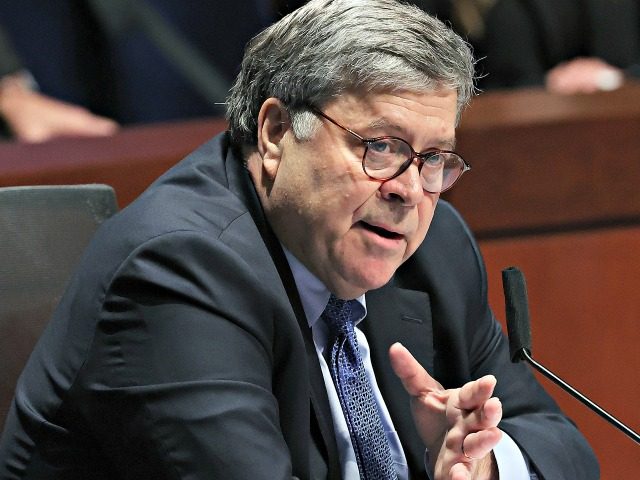 by JOEL B. POLLAK

A Department of Justice (DOJ) investigation into the “unmasking” requests made by outgoing Obama administration officials in 2016 and 2017 has ended without any criminal charges or findings of wrongdoing, according to the Washington Post.

The Post did not report whether that included investigations into leaks of the names of Americans who had been “unmasked” in classified reports — specifically, former National Security Advisor Michael Flynn, whose name was leaked to the Post.

The federal prosecutor appointed by Attorney General William P. Barr to review whether Obama-era officials improperly requested the identities of individuals whose names were redacted in intelligence documents has completed his work without finding any substantive wrongdoing, according to people familiar with the matter.
The revelation that U.S. Attorney John Bash, who left the department last week, had concluded his review without criminal charges or any public report will rankle President Trump at a moment when he is particularly upset at the Justice Department. The department has so far declined to release the results of Bash’s work, though people familiar with his findings say they would likely disappoint conservatives who have tried to paint the “unmasking” of names — a common practice in government to help understand classified documents — as a political conspiracy.

In May, then-Acting Director of National Intelligence Richard Grenell declassified a list of Obama administration officials who had made unmasking requests related to Flynn. Former Vice President Joe Biden’s name was among those on the list.

Washington Post columnist David Ignatius was the first to reveal Flynn’s telephone conversations with then-Russian ambassador Sergey Kislyak, though the leak may have been made to the Post newsroom.

It is illegal to leak classified information, including the names of Americans who appear on intelligence intercepts of foreign communications.

Michael Flynn is still on trial for lying to the FBI, despite efforts by the DOJ to drop the case based on exculpatory evidence.
___
https://www.breitbart.com/politics/2020/10/14/report-doj-investigation-into-unmasking-ends-with-no-charges/