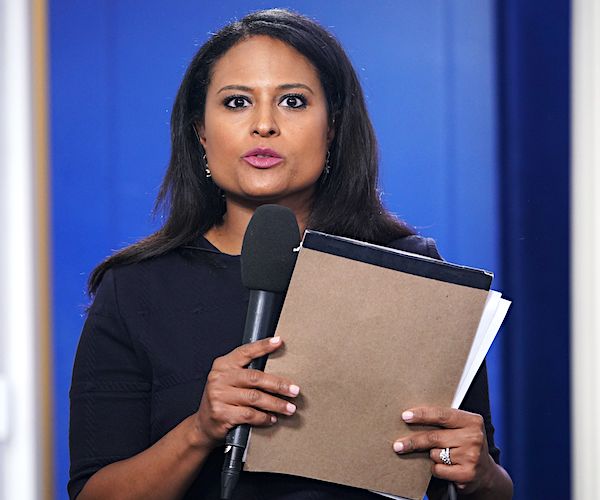 For those looking for balance and fairness from the second, and final, presidential debate they might not expect it from the handpicked NBC News White House correspondent Kristen Welker.

“The problem is the anchors are all crooked,” Trump told host Greg Kelly. “Now we have Kristen Welker; she’s a disaster. She’s a never Trumper from NBC.

“Anyone who’s ever dealt with Welker knows she’s an activist, not a reporter,” a senior White House official told the Post. “The White House press team views her the same way they would AOC [Rep. Alexandria Ocasio-Cortez, D-N.Y.] or [California Democrat House Speaker Nancy] Pelosi if they walked in the office.”

Welker and her family celebrated Christmas at the White House with the Obamas in 2012. Her mother and father, Julie and Harvey Welker have donated tens of thousands to Democrat candidates and nearly $20,000 to ex-President Barack Obama alone, according to the Post.

Welker does not have a listed party registration today, per the report, but she was last registered as a Democrat in Washington, D.C., in 2012 before her Christmas at the White House with the Obamas, and she was also registered Democrat in Rhode Island in 2004.

As a White House correspondent she has a history of using Democrat talking points in questioning President Trump.

But in March 2016 she showed deference to Hillary Clinton during her primary with Sen. Bernie Sanders, I-Vt., telling Clinton Campaign Communications Director Jennifer Palmieri what question she was going to ask Hillary, according to the Post.

Welker will moderate the debate Thursday, Oct. 22 in Nashville. The Trump campaign had sought to have more than three debates against Biden, which the Biden campaign rejected. Also, Biden’s quick move to rework his campaign schedule to participate in an ABC News town hall this past Thursday, forced the Commission on Presidential Debates to cancel what was to be the second debate between Trump and Biden.

Trump has also noted the debate commission alleges to be nonpartisan, but its chairmen and board are filled entirely of Democrats and “never Trumpers.”