This was the perfidious Covid mandatory vaccine plan all along.

Lockdown till a Covid vaccine comes? It’s too long to wait, and there’s no guarantee it will be effective anyway

Rob Lyons is a UK journalist specialising in science, environmental and health issues. He is the author of ‘Panic on a Plate: How Society Developed an Eating Disorder’.
RT.com 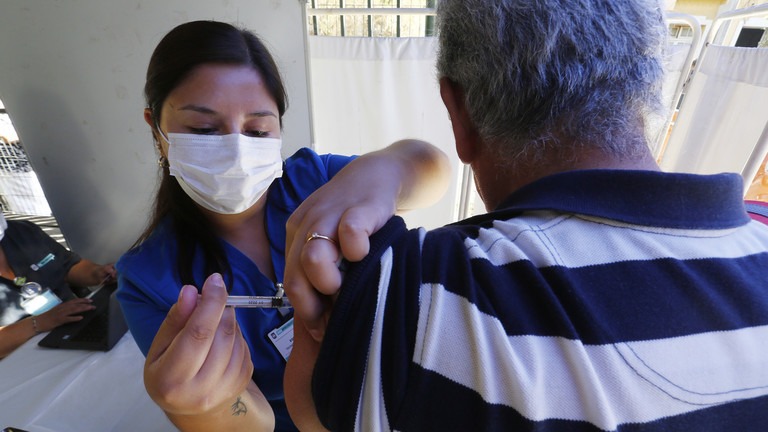 If you’re pinning your hopes on a vaccine for Covid-19 bringing back ‘normal life’, think again. We won’t see one until next year, not everyone will get it and it may not even stop transmission.

Wales, Northern Ireland and the Republic of Ireland are all heading into lockdown in one form or another, and restrictions are being cranked up in England and Scotland. Cheerleaders for lockdowns say that we need to keep cases low until a vaccine arrives. But it is becoming increasingly apparent that such a policy would cost millions of jobs, discourage or prevent people from seeking treatment for other conditions and destroy basic freedoms long before mass vaccination is available.

The popular perception is that vaccination is a panacea. We get given a jab and, hey presto, we’re immune from disease. But that doesn’t really accord with reality in many cases. In an article for the Guardian, David Salisbury, the former head of immunisation for the Department of Health, says that the seasonal influenza vaccinations are only about 75 percent effective. On top of that, not everyone will get the jab. Salisbury notes that the seasonal flu vaccinations only reach 75 percent of over-65s. Doing the maths, 75 percent of 75 percent means that just 56 percent of that target group will actually get protected.

Moreover, as Salisbury points out, targeting the most vulnerable means that transmission won’t be reduced much. For a vaccine to do that, we would need high levels of vaccination across all age groups, a far bigger task. He concludes, “We need to communicate the clear message that although targeted vaccination may offer some protection, it will not simply deliver ‘life as we used to know it.’”

In any event, the people likely to have the biggest impact on transmission are those who do the most socialising or who do jobs where they come into contact with a lot of people. Meanwhile, many people in vulnerable groups are already being careful to restrict their social contacts. So, a target vaccination programme won’t stop transmission.

It gets worse. The first generation of vaccines are unlikely to be even 75 percent effective. Salisbury notes that regulators have set a threshold of 50 percent effectiveness. An article in the BMJ goes even further. The article quotes Peter Hotez, dean of the National School of Tropical Medicine at Baylor College of Medicine in Houston: “Ideally, you want an antiviral vaccine to do two things . . . first, reduce the likelihood you will get severely ill and go to the hospital, and two, prevent infection and therefore interrupt disease transmission.”

Yet as the article author, BMJ associate editor Peter Doshi, points out, “the current phase III trials are not actually set up to prove either. None of the trials currently underway are designed to detect a reduction in any serious outcome such as hospital admissions, use of intensive care, or deaths. Nor are the vaccines being studied to determine whether they can interrupt transmission of the virus.” The aim of the vaccine trials is simply to assess if they can reduce the number of people who develop ‘symptomatic disease’.

It might seem logical that if you prevent symptomatic disease, you’ll also prevent serious outcomes. But what if the vaccines only reduce those cases that would only ever have developed into mild illness? Doshi notes that an ‘event’ in two of the big trials is ‘a cough and positive laboratory test’. As long as the vaccine group had significantly fewer of these than the control group, the vaccine would be regarded as ‘effective’.

The problem is that to test for more serious outcomes would require an awful lot more people to be enrolled. Doshi quotes statistics from the US Centers for Disease Control and Prevention (CDC), which reported in late April that 3.4 percent of reported symptomatic cases resulted in hospitalisation. This varied by age group, from 1.7 percent in 0-49 year olds and 4.5 percent in 50-64 year olds to 7.4 percent in those 65 and over. Even the biggest trials currently underway, with 30,000 subjects, would not end up with enough serious cases to test for effectiveness.

The chief medical officer at drug company Moderna, Tal Zaks, admitted that the trial of the company’s vaccine would not test for the effect on transmission, either. “Our trial will not demonstrate prevention of transmission because in order to do that you have to swab people twice a week for very long periods, and that becomes operationally untenable,” he explained.

To be fair to the companies concerned, the costs involved are astonishing. To run a trial with 30,000 people involved costs $500 million to $1 billion. To run a trial with the power to assess effectiveness against serious outcomes and transmission would need to be 10 times bigger – and 10 times more expensive. Given the urgency of the situation, compromises are being made.

And when will we get a fully-trialled vaccine? The UK’s deputy chief medical officer, Professor Jonathan Van-Tam, told MPs last week: “We aren’t light years away from it. It isn’t a totally unrealistic suggestion that we could deploy a vaccine soon after Christmas. That would have a significant impact on hospital admissions and deaths.”

But even the optimistic professor added: “The first vaccines will be given to the elderly and vulnerable and to vaccinate those most at risk will take several months. Most people will not be given the jab.”

I think most people assume that a vaccine is just around the corner, it will be close to 100 percent effective because it’s been tested and that everyone will get it.

In reality, it will be some time in 2021 when a vaccine is rolled out, it will only have been tested to see if it prevents perhaps 50 percent of mild illness and only the most vulnerable groups will get it in the first few months. Most people won’t get it for a long time, if at all.

Yet we are being told we should tolerate restrictions on our lives, including further full lockdowns. The only basis for a lockdown is to delay the spread of the virus until something else comes along. Even test-and-trace systems are simply targeted lockdowns of individuals who have either tested positive for the virus or have been in contact with someone who has. The ‘something else’ needs to be either a cure for the disease or a vaccine against it. Neither is coming very soon. They may never come at all.

Meanwhile, the collateral damage from the current policies is enormous. We need to protect the most vulnerable people as best we can until enough of the rest of us have had it to achieve herd immunity.