PIZZAGATE 2020: Why was Ashey Biden taking showers with her father Joe as a young girl?!?! 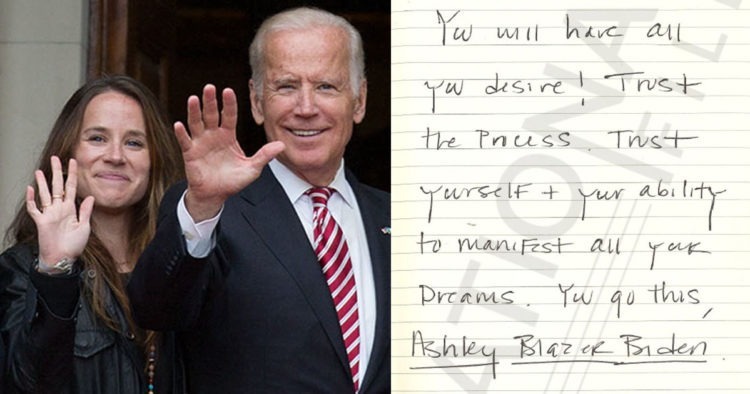 National File has obtained what a whistleblower has identified as a copy of the complete diary of Ashley Blazer Biden, the 39-year-old daughter of Democrat presidential candidate Joe Biden, dating from during the 2020 presidential campaign. National File also knows the reported precise location of the physical diary, and has been told by a whistleblower that there exists an audio recording of Ashley Biden admitting this is her diary.

According to our source, the diary also details Ashley Biden’s unhealthy relationship with sex, and the “probably not appropriate” showers she shared as a young girl with her father, Joe Biden.

After declaring she was “here for sexual trauma” in the previous entry, on page 23 of the diary, dated January 30, 2019, the author explores the topic of sexual abuse and how it may have led to her overactive sex drive. “I’ve had one of my hardest days – my sex drive is out of f**king control. Like literally, I am in heat,” wrote the author.

“I know it’s not the healthiest way to deal with things but @ least it’s better than drugs,” she wrote, adding that she thought she needed “sex to feel good.”

The author then explored why she felt this need to have sex, saying she believes she was molested as a child.

“Was I molested. I think so – I can’t remember specifics but I do remember trauma,” wrote the author, before listing a series of potential incidents, one of which may have included Ashley Biden’s cousin Caroline Biden, as the author says she remembers “being somewhat sexualized” alongside a person named “Caroline.”

The author then wrote that she remembers “showers with my dad” that were “probably not appropriate.”

On page 83, in an entry dated July 22, 2019, the author wrote that she received a phone call from her father, Joe Biden according to our source, who cried on the phone while expressing his worry for her in the days leading up to July 30-31 Democratic Primary Debate.

“My dad cried on the phone saying he has the debate in a week and ‘Now has to worry about [the author],’” she wrote. “And he cried. Maybe he knows what he is doing and it’s worked but my feelings of guilt often are overwhelming.”

In at least two entries, the author explicitly identifies herself as Ashley Blazer Biden.

This diary surfaces after Hunter Biden, the son of the Democrat presidential candidate, Joe Biden, has been exposed as having “underage obsessions” and corrupt business dealings as evidenced by emails and images provided by the New York Post and former New York Mayor Rudy Giuliani.

National File, as the media organization that published reports about the Pelosi family’s Ukraine dealings and the potentially illegal affairs of Democrat Senate candidate Cal Cunningham, believes the public has a right to read these entries that were obtained for National File by Patrick Howley, the reporter who broke the Veterans Affairs scandal, and the Ralph Northam racist yearbook photo.

Last year Ashley Biden was profiled by The List, which claimed that her “transformation is turning heads.” She was credited as working as a “social worker, activist, and entrepreneur.”