While Nobody Was Watching, Israel Just Wiped an Entire Palestinian Community Off the Map

Under Cover of US Elections, Israel Wipes Entire Palestinian Community Off the Map 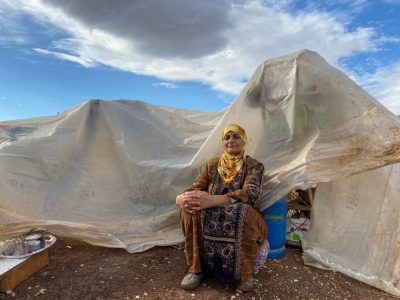 As the world was engulfed in the unfolding US elections on November 3rd, Israel quietly demolished an entire Bedouin enclave in the northern Jordan Valley, leaving more than 70 Palestinians homeless just as temperatures started to drop in the occupied West Bank.

At around 11am on Tuesday morning, the residents of Khirbet Husna were shocked to see a caravan of Israeli military jeeps, accompanied by a number of bulldozers and excavators, heading down the dirt pathway to their village.

“The soldiers often come here to evacuate us when they have military training,” Fatima Abu Awwad told Mondoweiss, as she sat amidst the rubble of what was her home just 24 hours earlier. 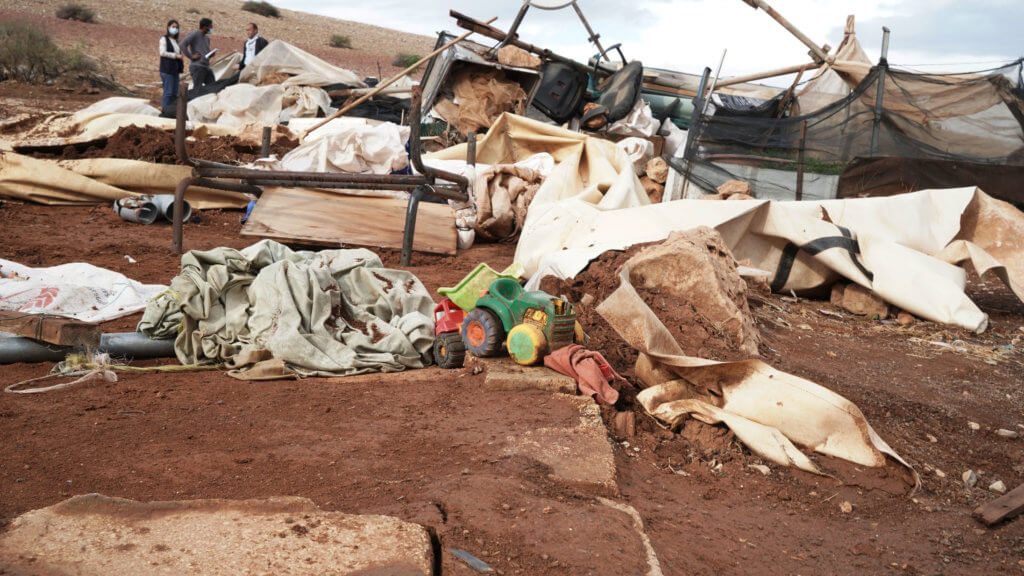 CHILDREN’S TOYS LIE AMONG THE RUBBLE OF THE VILLAGE OF KHIRBET HUMSAH IN THE NORTHERN JORDAN VALLEY. 41 CHILDREN WERE DISPLACED AS A RESULT OF THE ISRAELI DEMOLITION. NOVEMBER 4TH, 2020 (YUMNA PATEL/MONDOWEISS)

“But usually they give us a prior warning. This time, they came and told us to get out of our houses, they gave us just 10 minutes,” she said, adding that the soldiers were accompanied by dozens of workers from Israel’s Civil Administration, the agency responsible for enforcing things like home demolition in the West Bank.

After what felt like mere seconds, as Abu Awwad and her husband tried to empty their home of all the belongings they could, the Israeli bulldozers began demolishing everything around them, as what she described as hundreds of soldiers and Civil Administration workers surrounded them.

“They didn’t leave anything untouched,” Abu Awwad said. “Our homes, our livestock pens, our bathrooms, our water tanks, solar panels, everything. They destroyed everything.”

Just hours after Israeli forces concluded their demolition campaign in Khirbet Humsah, a cold front swept through the West Bank, leaving the families of the village scrambling to find any form of shelter.

“It was cold, windy, and rainy, and we had nowhere to go, nowhere to protect ourselves and our small children,” she said, adding that the family were forced to sleep under makeshift plastic tents, on cold wet mattresses on the soaked soil below them.

“I feel like I’m destroyed inside,” Abu Awwad told Mondoweiss. “Look around at what happened to us, how would you feel? We have nothing left.”

Khirbet Humsah is a Palestinian Bedouin community comprising of several tiny clusters of tents and shacks, sprawled across the al-Buqei’a plains in the northern Jordan Valley. It’s home to 11 Bedouin herding families, who have lived on the land for decades.

The families maintain a semi-nomadic way of life, relying on livestock and agriculture to sustain themselves and their families, who number 74 people, including 41 children. 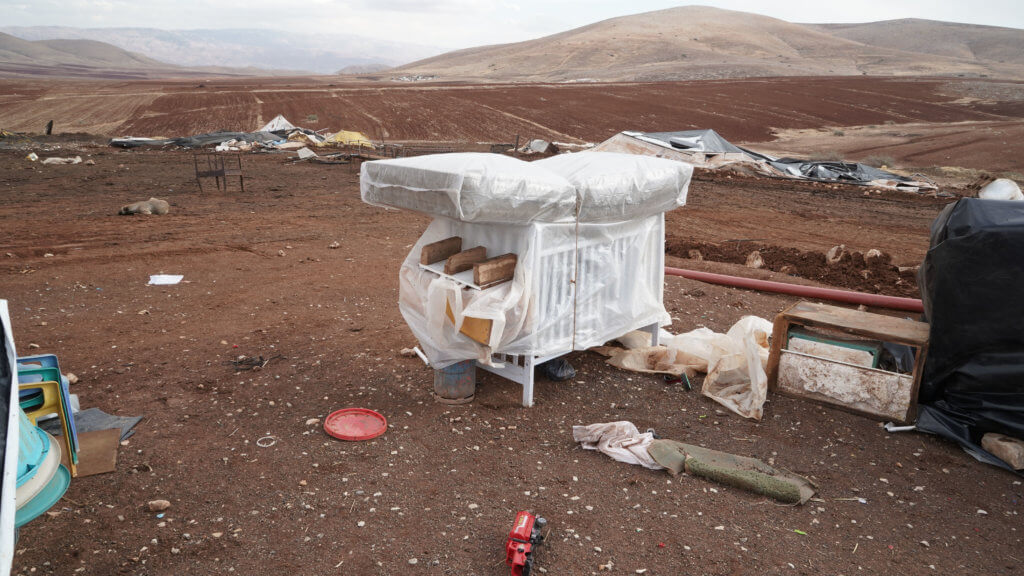 A CHILD’S CRIB AND MATTRESS WERE SALVAGED BY THE RESIDENTS OF KHIRBET HUMSAH, AFTER THEIR HOMES WERE DEMOLISHED BY ISRAELI FORCES. NOVEMBER 4TH, 2020 (YUMNA PATEL/MONDOWEISS)

According to Israel human rights group B’Tselem, in addition to 18 housing structures in the village, Israeli forces demolished 29 tents and sheds used as livestock enclosures, three storage sheds, nine tents used as kitchens, 10 portable toilets, 10 livestock pens, 23 water containers, two solar panels, and feeding and watering troughs for livestock, along with more than 30 tons of fodder for livestock, and confiscated a vehicle and two tractors belonging to three residents.

Several of the structures destroyed in the village, like the portable toilets and solar panels, were donated by the European Union and other foreign aid organizations. 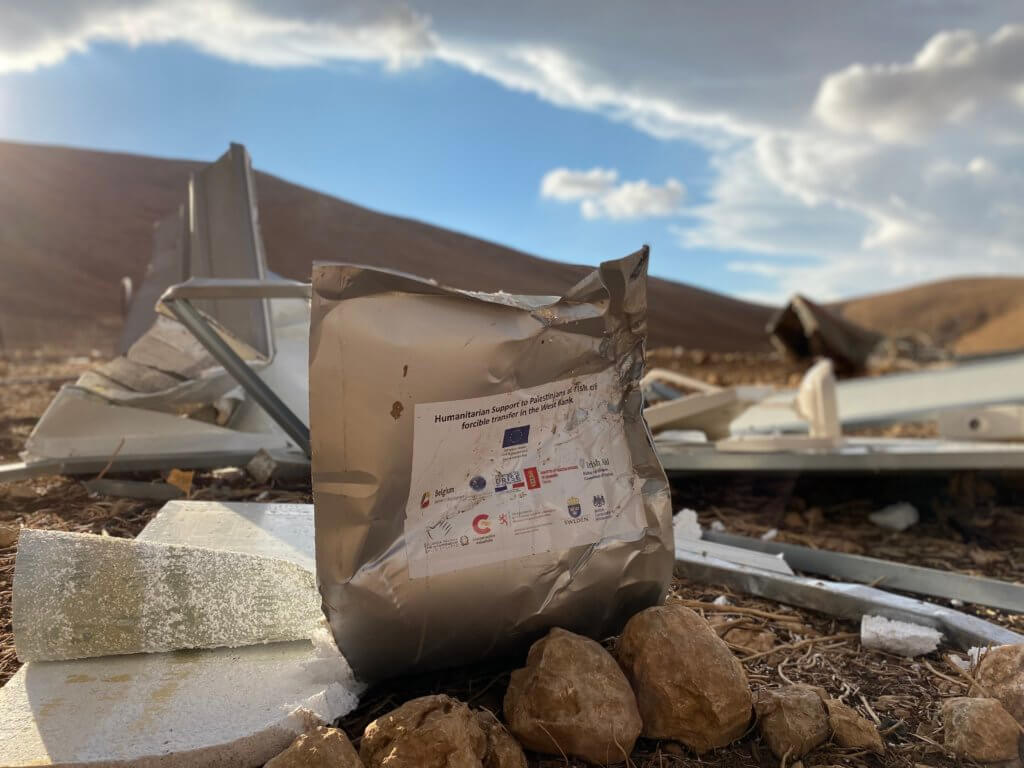 THE REMNANTS OF AN EU FUNDED BATHROOM IN THE VILLAGE OF KHIRBET HUMSAH, WHICH WAS COMPLETELY DEMOLISHED BY ISRAELI FORCES ON NOVEMBER 3RD, 2020. (YUMNA PATEL, MONDOWEISS)

Palestinian commentators, like Ali Abunimah, have been vocal in their criticism of the EU’s continued failure to take concrete action against Israel for the destruction of Palestinian homes and structures — many of which, particularly in Bedouin areas like Khirbet Humsah, are donated by the EU.

During a tour of the village a day after the demolition, Palestinian Authority (PA) Minister Walid Assaf, the head of the National Commission Against the Wall and Settlements, described the demolition as an act of “terrorism.”

Standing in front of one of the crumpled solar panels, Assaf asked “what danger does this pose to the security of a state that has the strongest of armies and nuclear weapons?” noting that the solar panels powered lights in the village, who are not connected to any electricity or water networks.

Assaf assured residents, including Abu Awwad and her husband, that they had the “full support” of the PA, who were planning on supplying a number of new tents to rebuild the village.

“Israel aims to expel us, ethnically cleanse us, and demolish our villages in preparation for annexation and the expulsion of Palestinians from the Jordan Valley,” Assaf said, adding “will remain with you until everything is rebuilt. Even if we have to sleep here, if we have to set up tents, like we did at Khan al-Ahmar, we will not leave this area.”

‘It all comes down to annexation’

Khirbet Humsah lies in the heart of the Jordan Valley, and is part of the more than 60 percent of the West Bank that is located in Area C.

According to activists, the demolition of the entire community is one of the largest demolition operations carried out by Israeli forces in years.

B’Tselem noted that with the demolition of Khirbet Humsah, 2020 has so far become one of the worst years for Palestinians in terms of home demolitions, with more Palestinians losing their homes in the first 10 months of this year alone than in any other year since 2016.

Though the land of Khirbet Humsah is not owned by the Bedouin inhabitants themselves, it is privately-owned by a number of local Palestinian landowners who reside in the nearby city of Tubas and its surrounding villages.

One of those landowners, Moataz Bisharat, is a local activist in the Jordan Valley. He told Mondoweiss that despite having the deeds to the land proving his ownership of it, the state of Israel also considers the land to be state land, which they use for active military training.

“Israel designates these lands as active ‘firing zones’ and ‘closed military zones’, and use these as a pretext to consistently evacuate and displace these Palestinians who are living here,” Bisharat said.

While these ‘firing zones’ have impacted Palestinian herding communities in the Jordan Valley for decades, Bisharat says that activists have seen a surge in recent years of a disturbing trend being employed by the state in these areas.

“The army will come in and demolish these communities or displace them from their homes, claiming that they cannot be in these military areas,” he said.

“But after the Palestinians have been expelled, the army will turn over the land to the settlers,” he continued. “We have seen this in the al-Mzuqah, Abu al-Qanduh, al-Farsiyeh, and Khirbat al-Sweid areas, all in the past few years.”

The process of expelling Palestinians and turning over lands to the settlers, Bisharat says, is indicative of Israel’s agenda in the Jordan Valley region: “It all comes down to annexation.”

Bisharat emphasized that while Israel did not officially enforce annexation as planned on July 1st this summer, it has continued to change facts on the ground, all with what he says is the “full support and backing of normalizing countries” like the UAE and Bahrain.

“Israel has a clear goal: expel Palestinians from this land, replace them with settlers, and annex the land into Israel,” he said. “And they are doing it all in plain view of the international community.”

US elections serve as ‘cover’

Moataz Bisharat, along with several other local and international activists, condemned Israeli forces for using the US elections as a “cover” for their demolition campaign in Khirbet Humsah.

Palestinian Prime Minister Muhammad Shtayyeh tweeted “As the attention is focused on #USElection2020, Israel chose this evening to commit another crime/ cover it up: to demolish 70 Palestinian structures, incl. Homes.”

Omar Shakir of Human Rights Watch also took to Twitter to write “enough is enough,” adding that the “war crime” took place while the world was distracted by the US election.

Bisharat blamed the Trump administration for giving Israel’s “right-wing extremist government” the green light to commit such crimes in the Jordan Valley, calling the demolition of Khirbet Humsah, “organized international terrorism against the Palestinian existence and Palestinians.”

When asked if he feared another four years under President Donald Trump, Bisharat said that while things may become even more difficult for the Palestinians on the ground, in the end, it doesn’t really matter.

“Whether Trump wins the elections or not, these lands are Palestinians and we are staying here,” he said. “Even if the occupation destroys everything we have every time, we will rebuild.”