EVERY THING YOU’RE ABOUT TO READ IS VERIFIED AND WAS MADE BY THIS CENTIPEDE; HE DID ALL THE HEAVY WORK 🏆🏆https://thedonald.win/u/PedeInspector/🏆🏆

REMINDER: THIS DOESN’T TAKE INTO ACCOUNT ALL THE HUNDRED THOUSANDS OF TRUMP VOTES DESTROYED, BURNED AND RIPPED APART. AND THIS IS THE EVIDENCE WE’VE FOUND SO FAR.

I saw the video on The Gateway Pundit and I decided to do some digging of my own, into a more reputable source that can verify that the glitch was indeed real, and that it affected the votes, instead of it being just a display glitch on that news channel. So I went digging… I made a script to run through the data and gather all instances where votes switched from Trump to Biden.

I went looking through the data I got from my script, trying to find if the moment the Antrim glitch happened in Michigan is there. And it is. Here is the Data. [ https://static01.nyt.com/elections-assets/2020/data/api/2020-11-03/race-page/michigan/president.json ]

And here is the specific part when the switch happened: https://i.maga.host/wGuVGZQ.png

You can see in that picture, that Trump lost 3,096 votes, those all went to Biden. BUT, Trump also lost 2,324 votes, that went nowhere.

SOURCES: Here is the data I used:

The data is from Edison Research, it is used for election coverage by at least ABC News, CBS News, CNN and NBC News. It is also used for the website of the NYT, and probably others as well.

I scraped the data from the NYT website, here: https://static01.nyt.com/elections-assets/2020/data/api/2020-11-03/race-page/pennsylvania/president.json to check for other states, replace “Pennsylvania” in the link with the state you want to check, for states that have spaces in their names, like New York, write New-York instead.

Take this picture for example: https://i.maga.host/RNPN3Oz.png

Do the same thing for Biden, and you’ll see that he gained the votes that Trump lost.

I made a program that basically checks every single change in votes, does the above to check if votes were switched, then adds them all up to get the total amount of switched votes.

Here is the link to a rar file containing all the .json files for the states, and the fraudcatch.py file, you’d need to download python 3.8.2 to use it, click EDIT with idle, then in the window that pops up click Run, to check how many votes were switched from Trump to Biden in a state, you then type findfraud(‘Hawaii’) for example, replace Hawaii with the name of the file of the state you want to check, the file for new hampshire is named newhamp for example, so findfraud(‘newhamp’), to check the total lost votes (For both candidates) do lostvotes(‘newhamp’) for example. https://workupload.com/file/s7s8SARjjqh

UPDATE 1:
When asked about the data switching from Biden to Trump, the anon answered with the following:

There were indeed switches that went from Biden to Trump, albeit a LOT smaller, for example, in Pennsylvania, 220,883 Trump votes were switched to Biden, and 24,721 Biden votes were switched to Trump, only reason I didn’t mention the other way around, was because I wanted it to get to the top and in the eyes of the Trump team as soon as possible, and thought it might be possible that it impedes that.

When asked about the reverse order and suggesting that this might be something that happens equally in both directions due to rounding errors in the truncated (only three decimals) vote total that his algorithm uses, the anon also responded with the following:

Sadly, it is the data itself that only uses three decimals, you can see it here https://static01.nyt.com/elections-assets/2020/data/api/2020-11-03/race-page/pennsylvania/president.json But it is definitely not due to any rounding error that these switches and lost votes happen. Why are there so many states with 0 switches and 0 lost votes for example?

What he said is pretty damning. In fact it seems he MAY have found “Fraction Magic” fraud in this election. See 9:15 and onwards here: 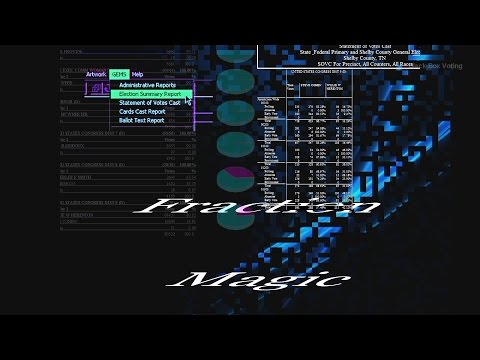