LOOK WHAT ROLLED INTO VIRGINIA TODAY—WHAT THE HELL IS THAT?!?!

It is obvious they are going full steam ahead with a Virginia gun grab, and it is going to be staged from Israel

PRO TIP: If you can, take your guns to a neighboring state NOW. Keep ONE with lots of bullets for combat or they might kick off the genocide, it is THAT SERIOUS.

FACT: They have glorified the AR because it is useless against their toys, the common guns that matter most will be a .270, then a 30.06, then a 12 gauge slug.

ENHANCED PRO TIP: RENT A CHEAP STORAGE LOCKER IN ANOTHER STATE IF FRIENDS AND FAMILY CAN’T RECEIVE THEM. Keep only what is necessary for combat, boat accidents do happen and if you put them in a storage shed, use your own lock and keep your mouth shut, even with the people who run the place.

That way, if you do manage to survive getting the ONE (1) gun you kept at home taken from you, you can just go to the storage shed for the next best option.

If the Israelis really do handle this, you’re going to learn all about Palestine, first hand.

If you distribute your weapons to “keep them safe” and they are in the same jurisdiction, it won’t work. Communists first learn of friends and family associations, and act against everyone in a family or group with pin point timing, they’ll hit Bob, Joe, Eric, Donald and Roy in separate homes at 3:51 on the same day. No one will be able to warn anyone, “keeping guns with friends to reduce losses” won’t work, keep ONE gun and the rest really do need to be kept out of state and fetched when needed.

First item: The FBI set up an “Al Qaeda” terror front where white nationalist gun owners are the terrorists. In this case, they were fronted as leftists that wanted to attack gun owners at the rally in Virginia. This report from Breitbart gives all the Sherlock clues but the writer of the report was no sort of detective. It is all put together in the comments below the report. The “white nationalist” group is called “the base” which is what Al Qaeda means in Arabic. We have explosives training, Nazis, white supremacists, Al Quaida, military style training camps, encryption violence, and Maryland, home of the world’s most corrupted courts as part of this story line.

First hand knowledge: Maryland does injections disguised as “TB tests” on anyone they want scrambled enough for one of their plot lines. Maryland is definitely the most horrific jurisdiction in perhaps the entire world. That this story line is playing out there is not a surprise to me, nothing that comes out of this can be trusted to have any accuracy at all. Maryland absolutely will drug people and make them believe or testify to anything, and then render them incapable of connecting a coherent thought of their own for the rest of their lives. 100 percent communist gulag. I have seen the shots myself and how they coerce people into taking them, a 15CC syringe full of mysterious yellow liquid is NOT a TB test and the shot is designed to put the drugs into your lymphatic system, where they can linger for decades.

Out take: Three people were grabbed for a “terror” plot from god knows where, and made to believe whatever. Perhaps there is a thread of reality about their origins, and maybe they actually played the game a little, but when they entered the system in Maryland the story became whatever works for the agenda and the patsies are gonna believe it. The world really needs to know about Maryland and how what is going on there is identical to the worst Bolshevik Russia ever did, they flew it perfectly under the radar until I saw it myself. There is no such thing as a 15 CC TB test administered via a syringe and needle, what the hell is that shot?

I flew a little loose with that (like I did when I recently revealed that temple) because Dutchsince, Field,Abel Danger and possibly Mike got vanished recently, and people need to know Maryland is GROUND ZERO while I am still able to say it.

Virginia is now hiring crisis actors for the “terror” story they need to kick off the gun grab. And the pay is $250 per day. PLEASE NOTE: If Soros is paying for this, you’ll probably end up getting jipped. He may be a billionaire but he’s over-extended himself and rips off his role players whenever he can.

“But the only problem is Soros is a bitch-ass dickstain.

That motherfucker promised to pay me $2,000/week and give me health insurance. He promised to set up a retirement account. He even promised to give me a sizable bonus at the end of the year. But after the inauguration, when it was time to be paid, no check came in the mail.”

My comment: Well, that’s good to know, but I can’t be sympathetic.

Next item: Virginia is going to have Israel handle the drones during the gun grab

You can’t make this stuff up, but HERE IT IS. and I beg to question: Why are they consulting ISRAEL of all places right now, for drones, when China provably makes better drones a lot cheaper? Is the first American gun grab actually going to be staged from Israel?

So we have: Already the FBI sent a group of patsies to one of the gun rallies in Virginia and “busted them”, only to vanish them into a hell hole in Maryland, where they will be perfectly transformed into what is needed for a story line. We have crisis actors being hired, and military contracts with Israel.

AND LOW AND BEHOLD, LOOK WHAT ROLLED INTO VIRGINIA TODAY WHAT THE HELL IS THAT??!!?? 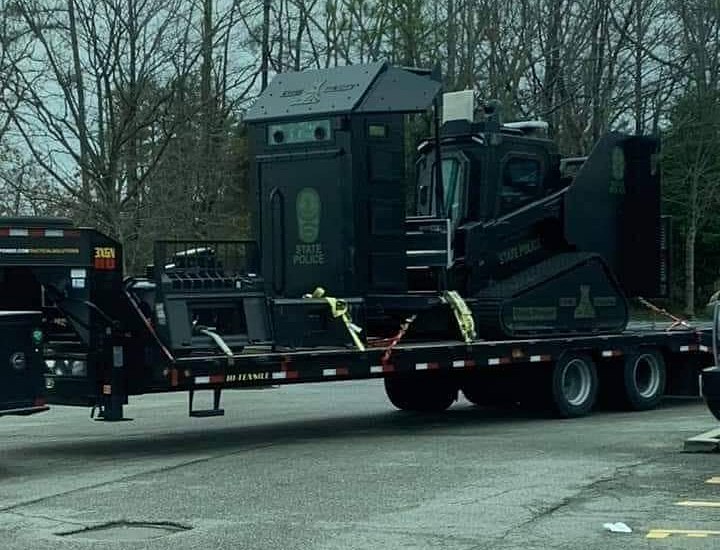