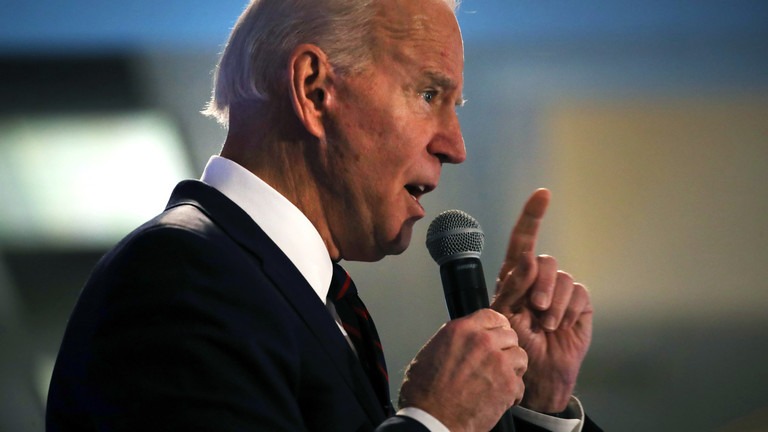 Joe Biden’s presidential campaign has issued a warning to the media cautioning journalists against spreading what he called “debunked” theories about his controversial role in having a Ukrainian prosecutor removed from office.

Biden has previously bragged about his role in having Shokin fired, even admitting on camera that he presented an ultimatum to Ukrainian authorities, threatening to withhold a billion-dollar loan guarantee unless the prosecutor was given the boot. It emerged later that Biden’s own son Hunter sat on the board of the Burisma energy company which Shokin had been investigating for corruption.

The memo, described as “unusual” by NBC News, demands that “any media organization referencing, reporting on, or repeating” claims that Biden engaged in wrongdoing “must state clearly and unambiguously that they have been discredited and debunked by authoritative sources.”

The memo instructs journalists that it is “not sufficient” to say allegations against the Democratic candidate are “unsubstantiated.” They must tell readers there is a mountain of evidence which debunks them, it says. Any journalists or media organizations failing to adhere to Biden’s standards in their reporting on his and his families’ activities in Ukraine are accused of “malpractice.”

The memo comes as Republicans call for Hunter Biden to testify during Donald Trump’s impending Senate impeachment trial. Trump was impeached last month by the US House Representatives for “abuse of power” and “obstruction of Congress” relating to the alleged claim that he withheld aid from Ukraine in an effort to force an investigation into Biden’s involvement with Burisma and his role in Shokin’s firing.

However, even if Biden’s claim that he was not motivated by his son’s position on Burisma’s board when he insisted on Shokin’s sacking is true, he has already publicly admitted to threatening to withhold money from Ukraine unless authorities did his bidding — which, somewhat ironically, is exactly what Democrats impeached Trump for last month.

One campaign that did not get Biden’s memo is that of Bernie Sanders, which has earned criticism from the left for calling Biden “corrupt” in an attack ad. Among the critics was liberal economist Paul Krugman.

This is a really bad look. It illustrates everything that makes many Democrats distrust the Sanders team — and the buck stops with the candidate https://t.co/EY1QL7YbXx

Trump’s trial in the Senate is set to kick off this week and has been dismissed by his legal team as a “highly partisan and reckless obsession” engineered by Democrats who want him thrown out of office.