Last October, I said if Eric Ciaramella is exposed to be the whistleblower, the entire impeachment debacle would crumble. Today, this was confirmed by Rand Paul and John Roberts. 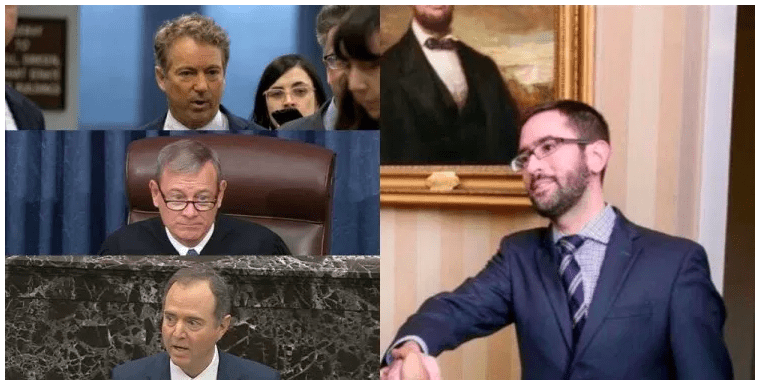 On the second day of questions being asked from Senators through Chief Justice John Roberts, the presiding judge continued blocking questions from Senator Rand Paul that named the alleged whistleblower, Eric Ciaramella. He has this power, at least partially, as he is presiding over the impeachment trial. But there are arguments that could be made that since the Senate has the sole constitutional power to try the impeachment, a Senate majority ultimately has the power to overturn any decisions the Chief Justice makes.

That likely won’t happen, but we’ll wait and see. In the meantime, conservatives are steaming over Roberts’ quashing of Paul as well as threats by Democrats to punish him for his impudence.

Why was Rand Paul's question not asked? By what law or what justification was he silenced? This is extremely scary to witness and answers are needed.

Incredible cowardice, arrogance, and abuse of power by an unelected judge to hijack the U.S. Senate.

BREAKING: Democratic Sen. Richard Blumenthal is calling for "serious sanctions" against Sen. Rand Paul for his attempts to name the "whistleblower" in the Senate trial

It’s understandable that House Manager Adam Schiff and the other Democrats would want the whistleblower’s identity to be withheld. As I noted last October, if Ciaramella is, indeed, the whistleblower, the Democrats’ narrative surrounding impeachment gets shredded. Moreover, Schiff’s clear attachment to the whistleblower and the lies he’s been telling about not knowing who he is make Ciaramella a double-edged sword for the Congressman.

The question today that some are asking is whether or not the Chief Justice is putting his thumb on the scales of justice to benefit Democrats. It seems conspicuous that he’s so adamant about not allowing the whistleblower’s name to be mentioned. Is he simply being cautious for the sake of the whistleblower and for himself out of concern that reading a question with his name will somehow prompt retribution against him? This would seem to fit with Roberts’ modus operandi.

Then again, he has been very subtle in his attacks on President Trump, but not subtle enough to hide the fact that he doesn’t care for the man in the Oval Office. He also has access to heaps of information others simply cannot see. Does he know Ciaramella’s past would come back to haunt the Democrats’ case if he is exposed as the whistleblower?

We may never know for sure, but it certainly seems like the Chief Justice’s avoidance of allowing a commonly believed fact to enter into the proceedings means he’s protecting more than his own self-interests or Ciaramella’s safety. If Ciaramella is brought openly into the impeachment trial, mainstream media and government agencies will have a de facto green light to talk about him. What they reveal may be too damaging to the Democrats’ case for the Chief Justice to allow.

Here’s what we know about Eric Ciaramella:

If you add it all up, you can see the pickle the Democrats are in with Ciaramella. He wasn’t a patriotic American fulfilling his solemn duty when he blew the whistle on President Trump. This was the culmination of years of work—from 2016 Spygate all the way through to the phone call between President Trump and President Zelensky—that demonstrates what we’re seeing today: a long-term campaign for a soft coup against the President.

Ciaramella’s involvement ties it all together. He was there when people in Obama’s Department of Justice were setting up Trump campaign and administration officials like Carter Page and General Michael Flynn. He was there to blow the whistle about President Trump allegedly firing then-FBI Director James Comey because Russian President Vladimir Putin ordered him to do so. As a result, Ciaramella is in the Mueller Report.

While the general public is mostly unaware of who Ciaramella is if they’ve even heard his name (and they probably haven’t if they get their news from mainstream media or Facebook), those who have been following closely, like Rand Paul, realize that if he is brought into the impeachment proceedings, the truth will come to light. What is the truth? This impeachment mess is not a response to a phone call between world leaders. It’s the culmination of a systematic attack on our republic by the “Deep State,” the Democrats, and mainstream media to either overturn the results of the 2016 election, subvert the 2020 election, or both.

There’s another important reason the Democrats don’t want Ciaramella to be let out of the bag. If he’s brought out, Intelligence Community Inspector General Michael Atkinson is in play. His is the only testimony that hasn’t been released from the initial House impeachment hearings in the infamous “SCIF.” According to ranking member of the House Intelligence Committee Devin Nunes, what Atkinson said was damning to the Democrats in general and Adam Schiff in particular.

This is a complex web, one that’s hard to see as a whole without inserting Eric Ciaramella into the center of it. But his identity and connections to the whole sordid affair are being blocked at every turn. If President Trump’s defense would be allowed to face him and expose his long history of trying to take down the President that goes back to before the 2016 election, it would shift public sentiment and send the House Managers’ case crumbling to the ground.

Democrats have been crying “cover up” since the Senate trial began. The only true cover up is being done by Adam Schiff, John Roberts, and mainstream media. They all know if Eric Ciaramella is unveiled for this impeachment, the whole thing unravels.