A Coronavirus Clarification for Those Who Have Emailed SOTN

SOTN has received a number of emails from our astute readers providing information about the coronavirus—“a group of viruses that cause diseases in mammals and birds. In humans, coronaviruses cause respiratory tract infections that are typically mild, such as the common cold, though rarer forms such as SARS, MERS, and COVID-19 can be lethal”.

SOTN received many of those emails after posting the following important article:

CORONAVIRUS BIOWEAPON MYSTERY SOLVED: It’s all in the name!

From the preceding article, many folks walked away with the misunderstanding that SOTN was speculating that the specific Wuhan coronavirus — COVID-19 — was the first coronavirus of its kind; it is not.

Many of those emails correctly state the scientifically proven family of corona viruses has been known since the 1960s.  See Wikipedia screenshot below: 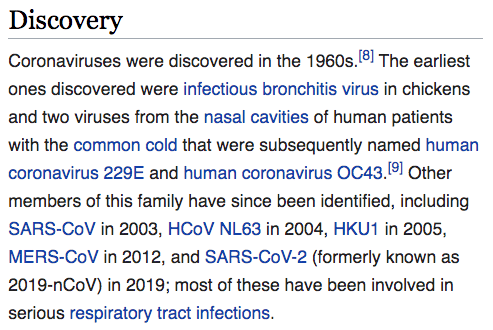 What SOTN intended to introduce to the world by that exposé is the fact that Electromagnetic Fields have created a highly conducive environment for coronaviruses to manifest.

In other words, the many different influenzas and colds and other respiratory diseases and illnesses are manifesting with greater frequency because of the increasing number and intensity of electromagnetic fields humanity is now exposed to on a regular basis.

With the rapid introduction of wireless technologies over the past 4 decades, the intensity of electromagnetic radiation and number of vectors of EMF dissemination have gone up tremendously.

Our thesis is that the proliferation of coronaviruses around the world, in particular, is a direct result of this ubiquitous sea of electropollution that virtually everyone is now immersed within.  The WiFi era which began in earnest at the turn of the millennium has seen the creation of a whole new ambient environment where it concerns daily exposure to both radiofrequency ranges and microwave radiation.

Prior to the Third Millennium, the human body had never been subjected to so many types of EMF and microwave assaults.  And, the dramatic increase in Electrohypersensitivity (EHS) throughout the world reflects that new fact of life.

Again, our main thesis is that the CORONA-VIRUS was named because of this direct correlation between the omnipresent electrical “coronas” and the uptick in viruses.  Whether this name was selected wittingly or unwittingly cannot be known for certain.  However, let’s just say the Universe saw to it.

Back to our article: CORONAVIRUS BIOWEAPON MYSTERY SOLVED: It’s all in the name!

Once the military deployment of 5G commenced, the aforementioned “sea of electropollution” was put on super-steroids.  The radiofrequency signal ranges and microwave radiation output, which are necessary to maintain a fully operational 5G power grid, are so intense that the biosphere is being profoundly altered with each passing week.

Whoever uses a smartphone, even in a 3G or 4G environment, is living in an invisible world of electropollution that is having unseen impacts on their health.  Those using 5G devices are being severely affected, although the symptoms may be subclinical.  In point of fact, 5G consequences to cellular health can occur over years without detection.  But just because the repercussions of 5G are apparently asymptomatic does not mean the smartphone user is not like the frog who is blissfully sitting in the pot of boiling water.

For anyone who wants to know just how downright dangerous the 5G super-hotspots are in their locale, please consult the following exposé.

5G Super-Hotspots: You better know where the “kill zones” are located!

Speaking of “kill zones”, that’s exactly what Wuhan, China was transformed into once the entire megalopolis was made an official 5G Demonstration Zone. See: ‘Wuhan City, the capital of Hubei, is expected to have 10,000 5G base stations by the end of 2019’ — Head of Hubei Provincial Communication Administration

Once the city of Wuhan, China was established as a 5G demonstration zone, the residents became exposed to the highest levels of radio-frequencies and microwaves necessary to activate a fully operational 5G network. Not only that, Wuhan was also being set up to be a model Smart City as it was undergoing an accelerated build-out of the Internet of Things.
(Source: Here’s why they really named it “Corona-Virus”)

In light of this HUGE 5G development project during 2019 throughout the Wuhan technology hub, the residents there were exposed to an intolerable increase in wireless energies.  Clearly, the sustained upsurge in both radiofrequencies and microwave radiation created an immediate predicament of symptom overwhelm for many folks.  Little did those smartphone users know that they were really suffering from either 5G Flu or 5G Syndrome.  And, yes, there is a difference. (See: How do you know if you have 5G Syndrome of 5G Flu?)

Back to the corona connection.

In the case of all Wuhanese, because of the intensive 5G roll-out during 2019, they were slowly being “crowned with coronas”, figuratively speaking, of course.  (Both “corona” and “crown” are derived from the same Ancient Greek word korōnè).  A corona is defined as “an aura of plasma that surrounds the Sun and other stars”.[1]

*A synonym for the word “corona” is “crown”.  Religious art often portrays the heads of the saints with a halo which represents a visible corona of spiritual energy.  That’s why saints are often depicted with halos and aureolas once they attain sainthood because they really do glow with enhanced spiritual power as if they have been divinely crowned with a corona.

However, the Wuhanese did not exude the kind of glow that can be seen as an aureole around a saintly personage; rather, the mega-doses of 5G energies they unknowingly received were quite invisible (yet still detectable by those scientists who knew better).  In point of fact, their exposure to all sorts of corona discharge-like surges in that 5G Demonstration Zone surely reached unparalleled levels quite quickly.  In this way, it could be said that the 5G activation set them ‘aglow’ which is why some folks literally fell to the ground — COMPLETELY INCAPACITATED OR DEAD — right as they walked down the street.

The primary conclusion of this brief clarification of the use of the word “coronavirus” in the context of the present pandemic is much more monumental than anyone knows.  For the only rational conclusion is that the current planetary electromagnetic paradigm is always wreaking havoc within the human body; albeit, on a subtle and subliminal level.  Given the fairly recent addition of microwaves into society, this ever-worsening predicament for all of humanity has deteriorated considerably with the countless 5G roll-outs occurring worldwide.

KEY POINT: The human body possesses it own measurable electrical field.  Some energy healers and body workers can feel, and manipulate, that energy.  Bioenergetic treatment and diagnostic technologies can also moderate and read, respectively, these subtle energies.  Moreover, every human being has his or her own unique energetic aura that emanates several feet outward from the physical body.  The human frame itself is hardwired with its own bio-electrical grid with a bio-electrical current that runs throughout the whole bio-organism.  What happens when the flow of that bio-current is constantly interrupted?  What really transpires with the introduction of extremely powerful 5G-level EMFs and microwaves into that delicate system?  When these natural bio-electrical currents are significantly over-ridden and/or regularly short-circuited, what then?

Hence, what’s really being presented here is nothing short of a scathing indictment of the ongoing military deployment of 5G and its promise of a fully functional Internet of Things.  Were either of these two exceedingly misguided projects to be carried out with any degree of success, the human race will become extinct much sooner than later.

Lastly, an extremely strong case is also being presented here against the reigning electromagnetic paradigm as it manifests in every manmade structure on the planet.  The critical point is that the electrical industry status quo is not only highly inferior, it’s quite hazardous to human health (also dangerous to animals, plants and planet itself) because the different types of damage it inflicts on a bio-organism is imperceptible.