Even the BBC is assailing the conspiracy realists who have accurately pieced together the coronavirus, 5G and chemtrail puzzle. 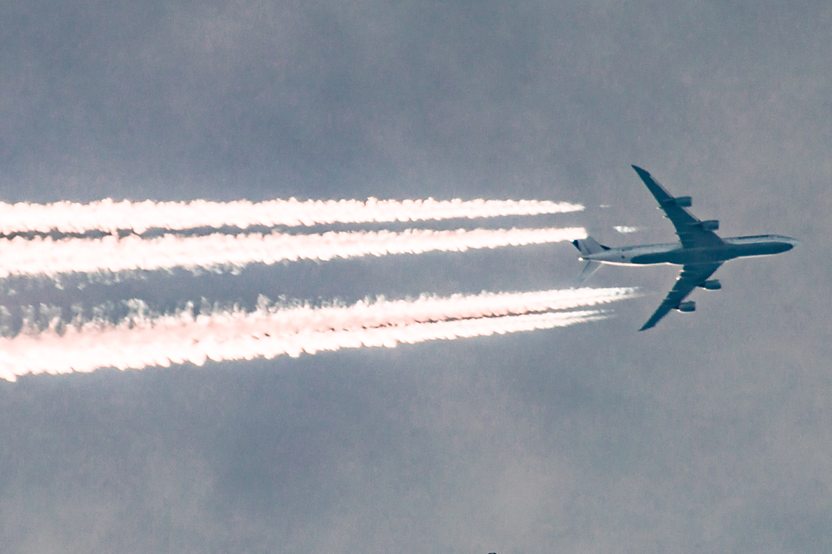 Conspiracy theorists on English-language social media are blaming the spread of the Wuhan coronavirus (Covid-19) on their betes noires of 5G mobile technology, chemical spraying from commercial aircraft, and perceived government plots to control population.

One post, which has been shared thousands of times, claims that the outbreak is actually a government plot to ensure “compliance” by digitally activating the virus and remotely shutting down people’s organs.

Other posts blaming 5G – the high-speed wireless technology for digital cellular networks – as the cause of the coronavirus outbreak make similar claims involving leaps of logic that have no scientific basis.

These conspiracy theories are typical of the way such misinformation spreads online, as it finds a welcome audience among people who reject expert views in favour of unsubstantiated and often outlandlish alternatives. 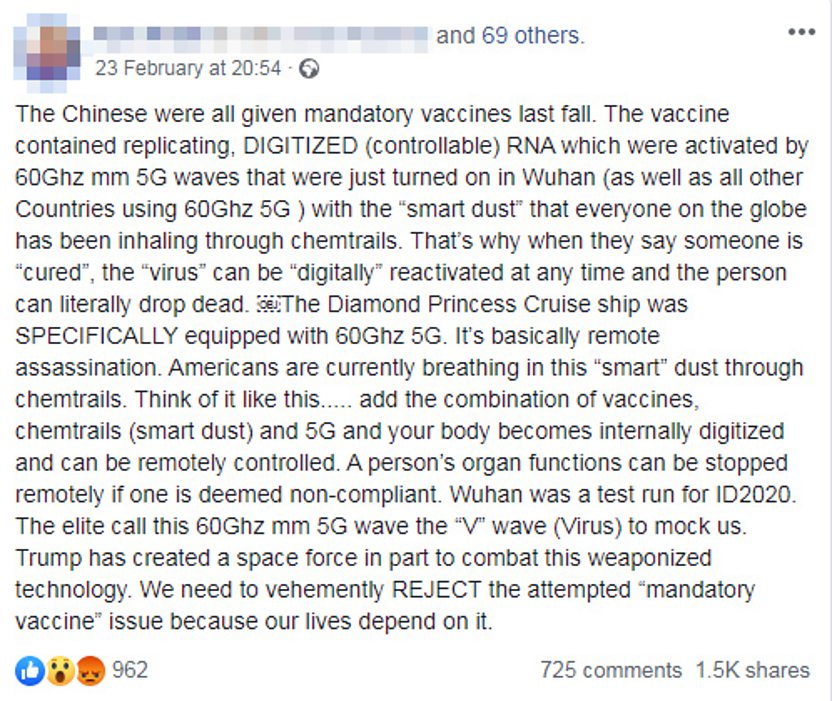 What do these posts say?

One Facebook post on 23 February which has been shared 1,600 times, claims that behind the outbreak is a mixture of factors, like mandatory vaccination, “5G waves”, breathing in “smart dust” from so-called “chemtrails”, and the malicious rewriting of human RNA through “weaponised technology”.

As well as “organic” shares, the post has been screencapped into a sharable image, and is being posted on multiple anti-5G Facebook pages, as well as those supporting far-right QAnon conspiracies, anti-vaccine and pro-alternative medicine pages, and pages supporting conspiracy theories.

It has also been adapted by other conspiracy pages to claim coronavirus is “a cover for 5G radiation poisoning“.

“Chemtrails” refers to the incorrect theory that aircraft vapour trails are actually drugs being sprayed from aircraft as part of some global population – or mind-control conspiracy. They are – in fact – hot exhaust gases condensing on encountering freezing air at altitude.

Some conspiracy theorists claim that mandatory vaccination programmes are not public health campaigns to stop preventable illnesses, but are a means for governments to control and/or poison populations.

5G conspiracies use existing debunked tropes about non-ionising radiation to make health and mind control claims about the roll-out of the technology. These claims seem to be more vocal than those for anti-4G and -3G campaigns, and have been promoted by misinformation from Russian state media.

There is no evidence that coronavirus is linked to any of these things. 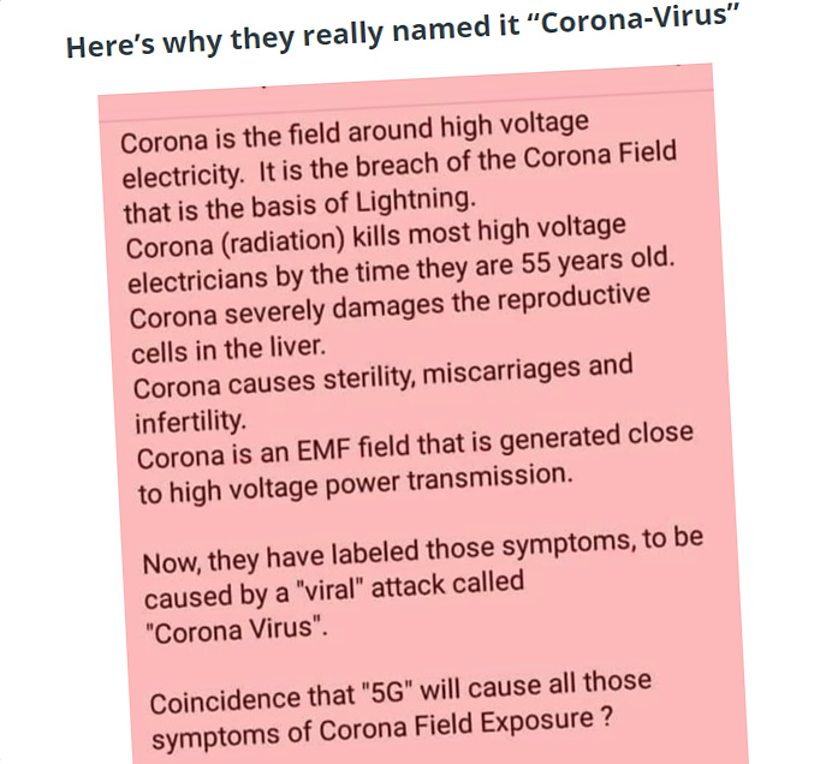 THE LIBERTY BEACON
This isn’t why they called it ‘coronavirus’

Other social media users are relying on junk science to link Covid-19 to some sort of bioweapon conspiracy.

The Facebook page of The Liberty Beacon, a website which supports multiple conspiracy theories, is one which has posted claims that the “corona” in coronavirus is because it has an electrical corona discharge around it. It does not – coronaviruses are so called because they look like a bejewelled crown.

From this incorrect claim, it then says that the spread of the virus was due to the presence of 5G technology in Wuhan, calling it a complex criminal conspiracy hatched by the UK and the United States “to wage bio-warfare against China”.

One common trope is confusing or ignoring the difference between non-ionising radiation (eg radio waves, visible light) and ionising radiation (x-rays, radiation from radioactive sources) to give the impression that 3G, 4G and 5G signals are dangerous to health.

It’s a similar story from author and broadcaster David Icke, whose popular Facebook and Twitter timelines link coronavirus to 5G, which he calls “a directed energy weapon”.

“What if 5G is being used to open up the skin of those in Wuhan so as to allow the new bio-weapon coronavirus to infiltrate more easily?” he asks.

A post by Michael Salla, whose Facebook and web presence is largely directed toward space, technology and UFOs, claims that the Wuhan outbreak may be an experiment in bio-warfare.

He claims Wuhan’s 5G rollout in 2019 “saturated” residents with [non-ionising] radiation, opening them up to the Covid-19 virus. “Was some unknown group wanting to test how a population weakened by 5G RF radiation would respond to a biologically engineered weapon?,” he asks.

There is no evidence that this has happened. Medical experts say that the highly-contagious virus crossed over from horseshoe bats to humans, possibly from a live animal market in Wuhan. 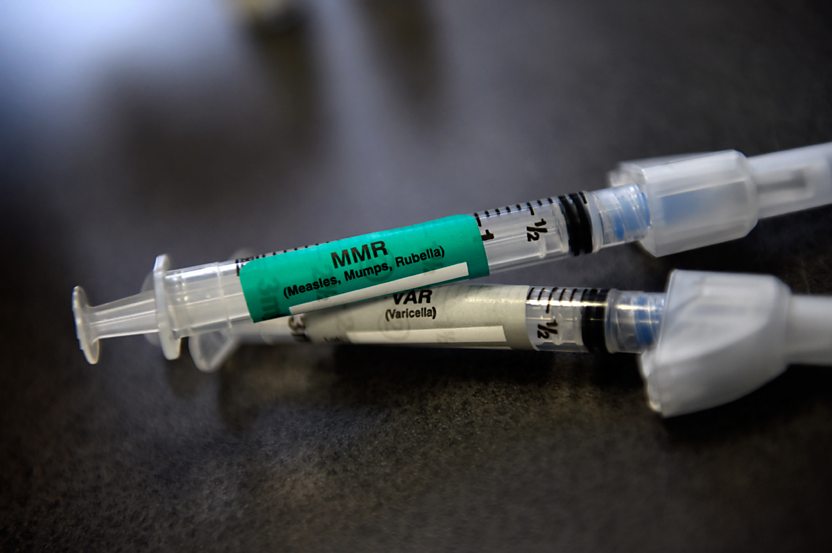 Conspiracy theories exploit herd behaviour by convincing people that their idea is more appealing than the rational explanation for an issue or event.

They also tap into a growing suspicion of experts, often providing a simplistic explanation which is more attractive than the nuanced view offered by specialists.

An equality of opinion provided by social media means that established news and scientific outlets find themselves battling for attention against populist agendas, hostile actors, and those in it for monetary gain, irrespective of the actual truth.

Once established, even thoroughly debunked conspiracies (For example: “Vaccines cause autism”) are difficult to dislodge from the public consciousness.

With social media making it easy to share opinions – either correct or incorrect – the viral spread of misinformation and conspiracy theories is far more likely in an electronically networked society.