MCCARTHY-GATE: BECAUSE THE BARBARIANS ARE INSIDE THE GATE

Or, more accurately, THE KHAZARIANS ARE INSIDE THE GATE, as they have been since the founding of the American Republic

With the illicit passing of the unconstitutional Federal Reserve Act of 1913, the Khazarian Cabal completely took over the U.S. Federal Government morphing it into an international crime syndicate known as the exceedingly corrupt U.S. Corporation. In so doing, the barbarian Khazarians have effectively demolished the American Republic as well as stolen trillions from the U.S. Treasury year after year with the assistance of every Speaker of U.S. House of Representatives (the House controls the nation’s purse strings).  This is why they have stealthily planted traitorous RINO Kevin McCarthy into his various House leadership positions setting him up to become Speaker [NOT].

There’s a very bad reason why Rep. Kevin McCarthy was strategically installed by his Khazarian masters into various House leadership positions since 2001.  He has been purposefully groomed via his successive tenures as House Republican Chief Deputy Whip, House Majority Whip, House Majority Leader, Leader of the House Republican Conference and House Minority Leader to take the lead post in 2023 as House Speaker.

What makes this extremely fast track to the highest office — Speaker of the House — so suspicious is that McCarthy was only voted into the House for the first time in 2007.  A mere two years later he was mysteriously catapulted into the powerful House Republican Chief Deputy Whip slot.  This kind of rapid and clearly unearned promotion ONLY occurs with the vigorous support of the Khazarian Cabal.

KEY POINTS: Inasmuch as the U.S. House of Representatives controls the purse strings for the US government, the Military-Industrial Complex would never permit anyone to occupy the critical Speaker position except for a hardcore warmonger.  Especially during the current period of fanatical American support for the Ukrainian War, the Khazarians will only allow a Speaker who will open the public purse for many more years of massive military expenditures.  Toward that end, McCarthy is a completely controlled Khazarian pawn exploited either by bribery or blackmail or some other form of coercion.  Certainly, “the sword of Damocles” hangs over McCarthy’s head were he to make any move that is not perfectly aligned with the warmongering dictates of his Khazarian overlords.

What this really means is that, somehow, the Khazarians have Kevin McCarthy completely controlled to do their bidding most likely with highly compromising pedophilia evidence created by a “Jeffery Epstein”.  Just as Nancy Pelosi was a transparent Khazarian puppet who wrecked and ruined the Republic with every bang of her gavel, McCarthy will be used to very slyly carry out the very same nefarious agenda—the globalist cabal’s New World Order agenda.

Which means that treacherous RINO Kevin McCarthy is a closet globalist who was selected for his ability and willingness to deceive and betray his conservative constituency.  Look it: this guy is from the most zealous sanctuary state on the Left Coast — the communist-run state of Kalifornia — so he is greatly suspect from the get-go.  And why has McCarthy already represented three different US congressional districts during his 9 terms in the House?  What really happened there?! 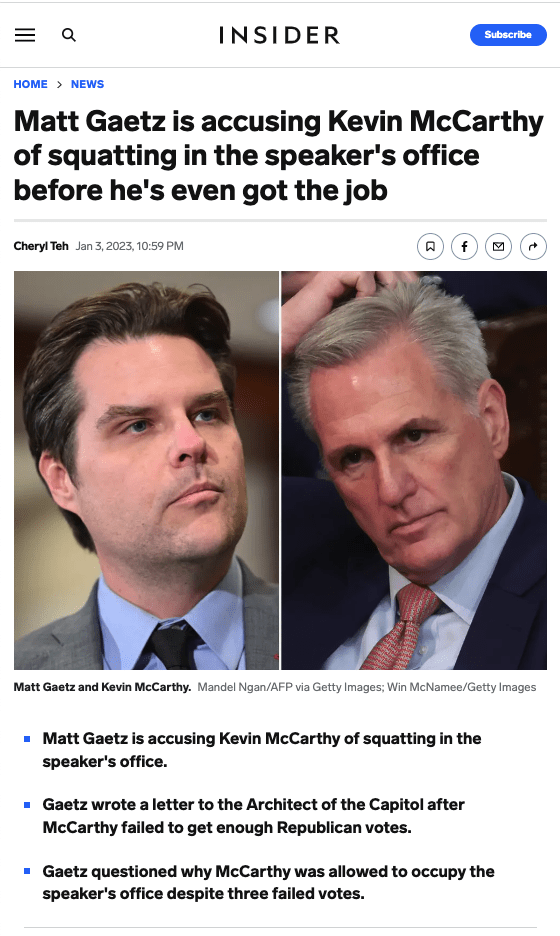 SOURCE: Who but the Khazarian Cabal could get Kevin McCarthy magically moved into the Speaker’s office in the absence of his lawful election to the top leadership post?

A nicely groomed and sweet talkin’ Irish-American California boy like Kevin McCarthy would never, EVER — of his own accord — move his belongings into the Speaker’s office BEFORE THE FINAL VOTE FOR THE SPEAKERSHIP EVEN TOOK PLACE.

That type of utterly shameless chutzpah is totally out of character for McCarthy; however, it’s exactly how the Khazarian Mafia operates inside the Beltway every day of the week.  Surely, McCarthy’s handlers seriously threatened him to take such a brazen and reckless initiative, the first time in House history an unelected Speaker has actually occupied the physical office space—WOWSER!!!

For context, can anyone even imagine what would have happened if
Donald Trump moved into the Oval Office prior to his 2016 election?

In a similar fashion, McCarthy audaciously refuses to terminate his candidacy for the Speakership even in the face of a full-scale “Revolt by the Right Flank”.[1]  This kind of nakedly engineered disruption, which only occurs when the Khazarian Cabal doesn’t get its way, confirms that, just like only the strictly managed POTUS Imposter Joe Biden would be permitted in the White House on Inauguration Day 2021, only the easily manipulated Kevin McCarthy will be allowed to hold the Speaker’s gavel during the 118th United States Congress, unless…………………….

Did the Khazarian-controlled Irish-American Mafia totally
take over the Republican Party to enable the
Democrats to steal elections?!

Ever notice how many Irish-Americans and their close affiliates have been enlisted by the Khazarian Cabal to lead the Republican Party.  It’s been said about the irresistible Irish charm that if the Irish were able to avoid the drink, they would have take over the world long ago.  Just look at the enduring legacy of Presidents John F. Kennedy and Ronald Reagan.  Even Irish-American Joe Biden was originally chosen for his once disarming gaffes and folksy but now goofy manner.

However, now the GOP has been totally taken over by a real Irish-American mafia.  The reigning triumvirate includes Senator Mitch McConnell, Rep. Kevin McCarthy and RNC Chair Ronna Romney McDaniel.  Each of these bad actors was specifically selected by the Khazarian Cabal because they were at one time appealing to the Republican base; and they could be counted on to convincingly and profoundly mislead their respective caucus, conference and/or constituency.

In closing, the true depth and breadth of MCCARTHY-GATE has only begun to manifest.  McCarthy’s true loyalty to the Khazarian Cabal will become more evident with each passing day of his foolish and embarrassing resistance to the wishes of the House Republican Conference.  But, in this rather oblique manner, the hidden Khazarian stranglehold on OUR House will slowly reveal itself.  Truly, the longer McCarthy ignores the demands of the patriotic House conservatives, the more he will bring about his own dramatic and disastrous downfall.

This stranglehold that has literally squeezed the life
out of the American Republic as it has the entire world
community of nations over the centuries. 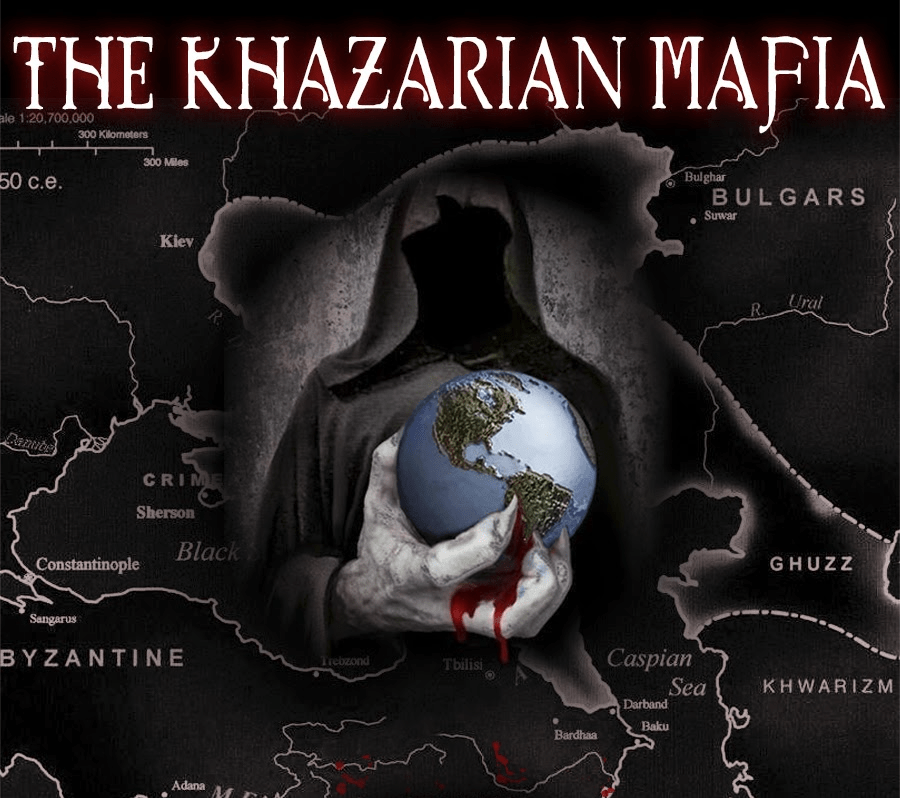 The Armchair Political Analyst
State of the Nation
January 4, 2023

SOTN Editor’s Note: This Alt Media platform fully expects MCCARTHY-GATE to quickly morph into HOUSEgate in light of the virtual lack of legitimate protest and necessary law enforcement by the RINO-fested House of Representatives regarding the illicit occupation of the Speaker’s office by McCarthy.  Yes, everyone understands that the Democrats ran a totally lawless and corrupt House, but much more is justifiably expected from the ‘righteous’ Republicans despite their secret fealty to their Khazarian rulers.  So, let’s see if they dismally let the country down yet again.