Trump Implies That The Coronavirus Will Be ‘Eradicated’ Without A Vaccine

President Trump’s impatience over social distancing measures continued during a meeting with business executives on Wednesday, where he implied the COVID-19 coronavirus will “leave” without a vaccine. 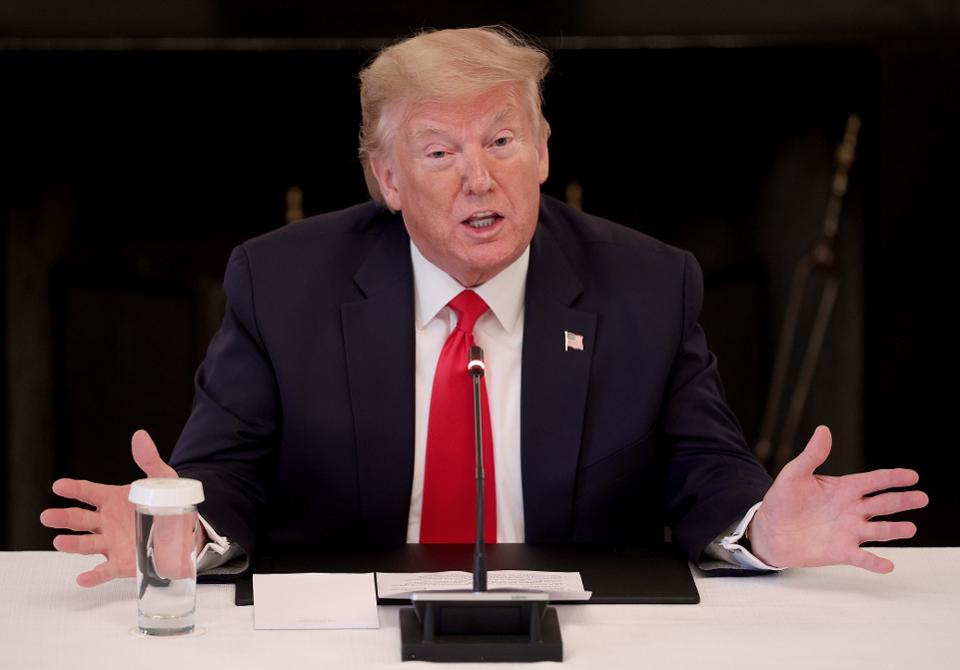 The question came after he voiced enthusiasm for packed sports stadiums that didn’t have empty seats between patrons, saying “I don’t want people to get used to this.” He later discussed holding campaign rallies before the November election.

When asked why he thinks the coronavirus will go away without a vaccine, Trump shrugged and said, “It’s gonna go, it’s gonna leave, it’s gonna be gone, it’s gonna be eradicated, and it might take longer, it might be in smaller sections, it won’t be what we had.”

As an example of controlling a disease without a vaccine, Trump brought up AIDS and SARS, but on April 17, during an appearance on Fox News, Dr. Anthony Fauci, the director of the National Institute of Allergy and Infectious Diseases, said it’s “misleading” to compare coronavirus to those viruses. “It’s an extraordinarily efficient virus in transmitting from one person to another, those kinds of viruses don’t just disappear,” he said.

The White House’s own three-part reopening guidelines, shared on April 16, include social distancing measures in its third phase, with Fauci during that briefing saying that a final phase would be a vaccine.

The time it would take to prepare a vaccine, 12 to 18 months optimistically, seems to be a point of contention for Trump. Bloomberg reported on Wednesday a more accelerated, taxpayer-funded program called “Operation Warp Speed” is under way, with the Department of Health and Human Services saying “the president refused to accept the timeline for standard vaccine development and encouraged a breakthrough process.”

Last week, Rick Bright, the director of the federal agency leading development of a coronavirus vaccine was suddenly dismissed. Bright claims his removal was politically motivated because he insisted the government invest in vaccines and less into drugs promoted by President Trump, like the antimalarial drug hydroxychloroquine. On Sunday, Scott Gottlieb, the former commissioner of the Food and Drug Administration, told CBS, “I think changing leadership in that position right now certainly is going to set us back. It’s hard to argue that that’s not going to have some impact.”

Trump has prematurely touted unverified therapeutics during the pandemic, particularly the anti-malarial drug hydroxychloroquine, which recent clinical trials have found to be ineffective. On Wednesday, he shared excitement over the performance of Gilead Sciences’ antiviral treatment remdesivir in a National Institute of Allergy and Infectious Diseases clinical trial. While vaccines and therapeutics serve different purposes, Trump voiced his preference for the latter: “Right now, If you gave me both, I’d rather have the [therapeutic]…maybe it eradicates it but it’s not safe, they have to do testing with vaccines whereas the therapeutics, it goes a lot quicker in terms of the process.”

Vaccines tend to take around 10 years to reach the market, but numerous companies are pushing to produce a safe vaccine in 12 to 18 months. The U.S. has spent $456 million ordering the development of a vaccine from Janssen, Johnson & Johnson’s pharmaceutical arm. Scientists at Harvard said this month that without a vaccine, social distancing measures could be required until 2022. The U.S. leads the world in confirmed cases of the coronavirus with 1,036,652, about a third of all cases worldwide. It also has the most reported deaths with 60,846.