‘If you don’t do it, I will!’ Trump threatens Seattle & WA govt with INTERVENTION if they don’t clear protester-occupied ‘Zone’ 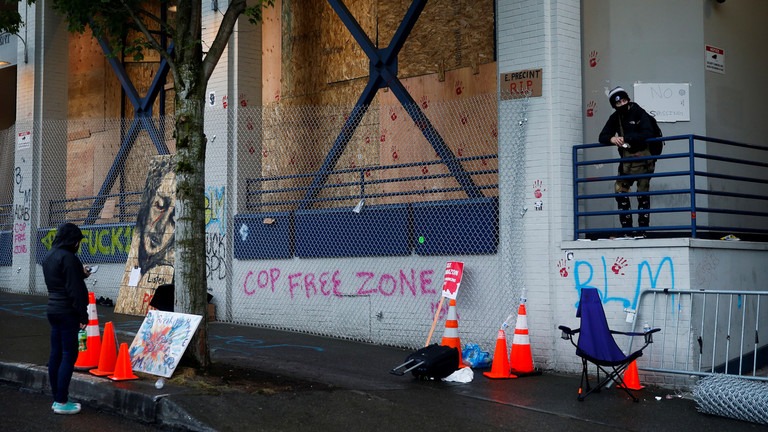 US President Donald Trump has delivered an ultimatum to Washington officials: clear out the Seattle Autonomous Zone or he’ll do it himself (presumably via the National Guard). The six-block area was taken by protesters on Sunday.

Trump threatened to send in the troops on Thursday on Twitter, ordering state governor Jay Inslee and Seattle Mayor Jenny Durkan to “take back your city NOW” and “MOVE FAST” doing it.

Radical Left Governor @JayInslee and the Mayor of Seattle are being taunted and played at a level that our great Country has never seen before. Take back your city NOW. If you don’t do it, I will. This is not a game. These ugly Anarchists must be stopped IMMEDIATELY. MOVE FAST!

“These ugly Anarchists must be stopped IMMEDIATELY,” the president tweeted, exasperated over Inslee’s claim to know “nothing” about the protesters occupying the six-block area of downtown Seattle that includes the abandoned East Police Precinct.

Inslee hit back against the “threats of military violence against Washingtonians,” slamming the president’s “fragility” and “insecurity” in a series of tweets in which he defended the protesters on Capitol Hill as “largely peaceful.”

The Trump administration knows what Washington needs right now – the resources to fight the COVID-19 pandemic.

If the president wants to show leadership, and that he cares about the people in this state, he should send us the PPE we’ve needed for months.

The governor wasn’t too proud to put his hand out, however. Inslee reminded Trump his state had needed “resources to fight the Covid-19 pandemic” for months, hinting that if he really wanted to “show leadership,” he’d send along some PPE. After all, the “unpermitted” demonstrators occupying the CHAZ might get sick being outdoors and not social-distanced like that.

The president’s tweets echoed similar messages posted late Wednesday night and deleted because Inslee had mocked a typo in one of them. After Trump declared “These ugly Anarchists must be stooped [sic] IMMEDIATELY,” Inslee snarked, “stoop tweeting.”

Trump also got in a few digs against the “Radical Left Democrats” running Seattle and repeatedly proclaimed his support for “LAW & ORDER!”

While Seattle police boarded up their precinct and left voluntarily on Sunday, Assistant Police Chief Deanna Nollette declared on Wednesday that the force was looking for a way to get back in. The Capitol Hill Autonomous Zone (CHAZ) protesters have listed defunding the police department as one of their demands, though it’s not clear how many different groups are camped out in the Zone, who (if anyone) is leading the pack, or whether they are all on board with the wish list posted online earlier this week.

City spokeswoman Lori Patrick denied any Seattle officials had interacted with “armed Antifa militants,” though the Zone has at least one self-styled “warlord” and some inside are armed.