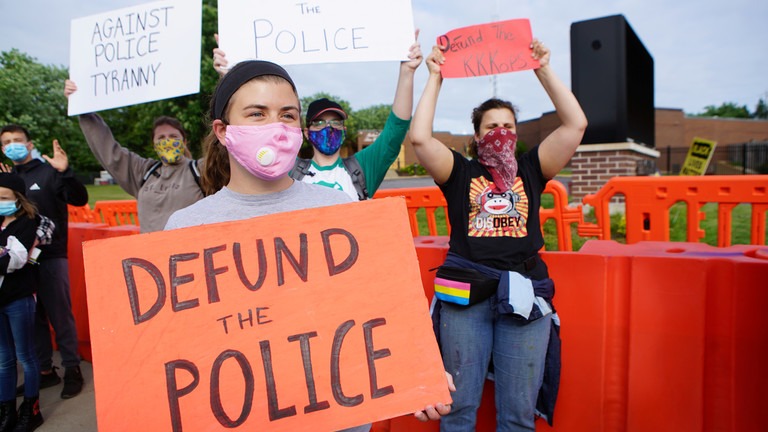 Protesters across the US have demanded to ‘defund the police’ after the death of George Floyd in Minneapolis, Minnesota © REUTERS/Lawrence Bryant

Major Travis Yates of Tulsa, Oklahoma is refusing to apologize and rejects accusations of racism, saying he was quoting research and not his personal opinion in a radio show appearance. The Tulsa PD has disavowed his remarks.

Yates made waves this week when his opinion piece about the wave of George Floyd protests went viral. “It’s over America. You finally did it. You aren’t going to have to abolish the police, we won’t be around for it,” he wrote in his piece, published by RT.

Tulsa Public Radio then took an interest in the outspoken officer, noting that Yates made an appearance on a KFAQ radio show on June 8. In their writeup, TPR claimed that the police major “suggested that, according to his interpretation of crime data, police should actually be shooting black Americans more frequently.”

Even though Yates spoke in his personal capacity, the TPR story led to the Tulsa police department disavowing him. His statements “are not part of any curriculum or training provided by the Department. Yates’ comments do not align with the mission, values, or policies of the Tulsa Police Department,” the Tulsa PD said in a statement on Wednesday.

What TPR described as Yates’s statement, however, was actually the police major quoting research by others – and saying that very clearly in the interview. The radio station has since updated the quote, but left the inflammatory headline up.

“I clearly prefaced this statement with attribution, and mentioned my sources by name. What I actually said—in mentioning research from Roland Fryer, Heather MacDonald, and the National Academy of Sciences—was that ‘all of their research says.’ Obviously, this is a serious, factual error of attribution,” Yates said in a statement posted by KTUL-TV on Wednesday.

Obviously there is no excuse for what Derek Chauvin did and he deserves to be punished, but to act like he is the norm for police officers across the country is just false. Yet so many people in the media and on the Left are pushing a lie that is costing officers their lives.

“Are you a racist?” KTUL reporter Maureen Wurtz asked Yates.

“Nah, that’s ridiculous,” he replied. “We’ve weaponized that word. Alright, if we don’t like somebody, we use that word.”

“Are you saying that African Americans aren’t being shot enough?” asked Wurtz.

“That is absolutely nuts. I’m amazed that anybody would even ponder that,” said Yates. “That’s crazy. I was citing data that said they’re underrepresented in that data. And so, I don’t want anybody to be shot.”

Yates’s clarification had no effect on Tulsa PD Sergeant Marcus Harper, from the Black Officers Coalition.

“He’s a grown man. He said what he said and he meant what he said,” Harper told KTUL. “It’s like he’s trying to appease a certain audience and that audience is the law enforcement community.”

Pressed to apologize for his comments, Yates refused. “I’m not going to apologize, because what I said was accurate based on the data,” he said. “I know we live in an era where everyone apologizes, but quite frankly, my apology isn’t going to make anything go away.”