‘Steve would not be happy!’ Trump goes after late Apple founder’s billionaire widow, who owns magazine behind ‘dead losers’ report 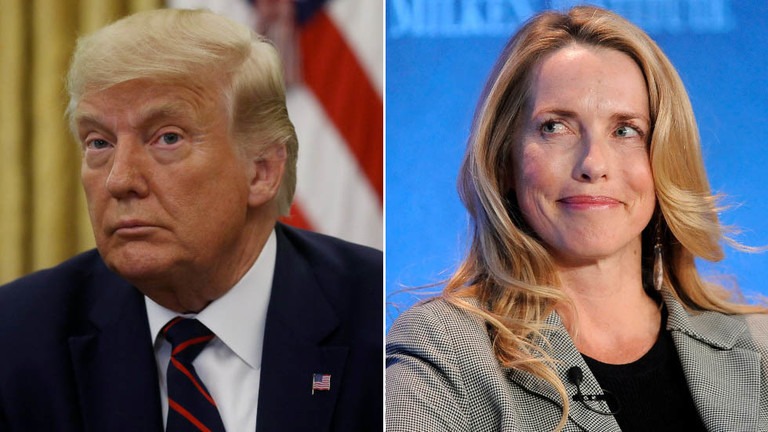 Donald Trump has tweeted out a call to confront Laurene Powell Jobs, the billionaire owner of the Atlantic magazine, which accused him of making nasty comments about the US military. She is a megadonor of Trump’s rival, Joe Biden.

Powell Jobs, the widow of Apple co-founder Steve Jobs, holds a 70 percent stake in the Atlantic, which she acquired in 2017. She has also kicked a share of her $21 billion fortune toward Democratic campaigns. After Joe Biden secured the party’s nomination, she cut the former vice president a check for at least $500,000, according to a New York Times report in July.

These facts have triggered accusations from a number of conservative pundits that the Atlantic is a paid-for platform to smear Trump, and the president himself ripped into the magazine and its owner on Sunday.

“Steve Jobs would not be happy that his wife is wasting money he left her on a failing Radical Left Magazine that is run by a con man (Goldberg) and spews FAKE NEWS & HATE,” Trump tweeted.

Jeffrey Goldberg is the Atlantic editor-in-chief, with whom Powell Jobs has reportedly had the closest contact in the outlet, apart from its co-owner David Bradley, who now own the minority share at the magazine.Goldberg – a former prison guard in the Israel Defense Forces – has written politically-motivated stories before. In 2002, he talked up Saddam Hussein’s supposed chemical threat to raise support for the invasion of Iraq. He described the Kurdish population of northern Iraq as hungering for US intervention, saying that George Bush’s ‘Axis of Evil’ speech “electrified” them. Seven years after the disastrous war in Iraq began, Goldberg addressed his critics in a sarcastic post in The Atlantic, titled “Yes, yes, I know I started the Iraq War.”

Goldberg’s anonymously-sourced story from Thursday claimed that Trump cancelled a visit to a US cemetery in France in 2018 because it was “filled with losers.” Some other outlets backed the narrative, though none of their sources would go on the record to corroborate the story publicly.

The Trump administration has furiously denied the claim. Even Trump’s former national security adviser John Bolton, who is now a bitter opponent of the president, said he didn’t hear him make those remarks.

Trump has now implied that the Atlantic owner Powell Jobs’ political leanings may have been behind the bombshell report, and has even suggested that his supporters should confront her about it. “Call her, write her, let her know how you feel!!!” he tweeted.

Trump has regularly dismissed negative stories about him as “fake news.” However, reinforcing his narrative is the fact that the Atlantic’s owner had seemingly admitted to using the magazine to push a political agenda. In a recorded discussion with Kamala Harris, Joe Biden’s running mate, Powell Jobs once said they must create a “cultural narrative” – apparently, not to be outdone by their conservative rivals – and “enhance and amplify” the political causes she funds.