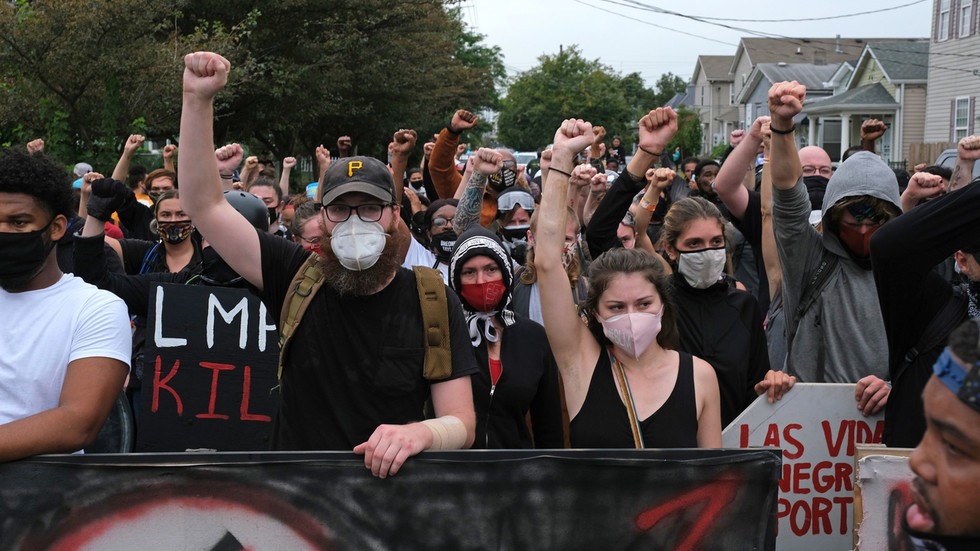 Angry racial justice activists were filmed threatening an elderly couple as they took over their table at an outdoor restaurant in St. Petersburg, Florida. The incident happened amid the protests over Breonna Taylor charges.

The video circulating on social media shows dozens of protesters carrying “No justice, no peace” signs and chanting “Stand up, fight back!” outside a restaurant. At one point, an activist comes up and sits on an empty seat at a table occupied by an elderly couple.

The woman says “This is my table” while trying to remove the activist from the seat but fails to do so. More activists then approach the table. One of them calls the woman “Karen” threatens to “knock your old-**s boyfriend the f**k out.”

Protests erupted in several cities on Wednesday after a grand jury in Louisville, Kentucky revealed the charges in the case about the fatal shooting of Breonna Taylor. A 26-year-old black woman, Taylor was killed in a March police raid when plainclothes narcotics officers attempted to serve a search warrant at her apartment.

Kentucky Attorney General Daniel Cameron said the police had properly introduced themselves before Taylor’s boyfriend opened fire on them. One officer was charged with “first degree wanton endangerment,” rather than murder, which angered anti-police brutality and racial justice activists.

The protesters smashed storefront windows and started fires in Louisville. Two police officers were shot and wounded amid the chaotic atmosphere in the city. One suspect was taken into custody.