California’s Governor Gavin Newsom, who is Nancy Pelosi’s nephew, is once again moving the goalposts in order to keep his state shut down, imposing irrelevant criteria to delay recovery.  He has become an economic troll.  With his state accounting for almost 15% of the national GDP, hobbling his state’s economy, even as counties are already starting to meet the criteria he set for relaxation of restrictions, depresses national output and employment statistics and thereby contributes to defeating President Trump. 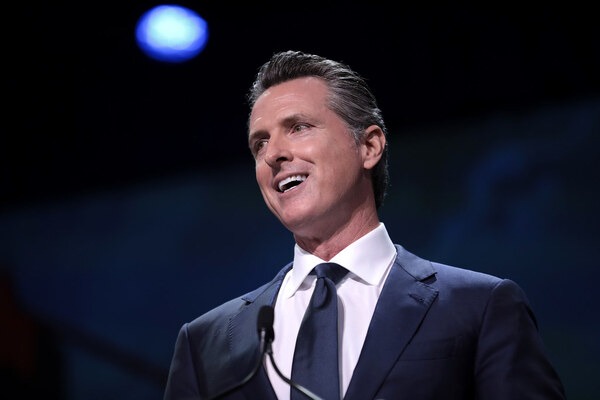 Newsom, who is becoming known to Californians as Nussoloini, is really stretching to find excuses to keep businesses closed and Californians unemployed and reverting to race-pandering.  Jennifer Van Laar of RedState writes:

Now that more counties are set to move out of the most restrictive tier, Newsom’s changed the game again and has added an “equity requirement” counties must also meet before they can move down a tier.

For a county with a population of greater than 106,000, the county must:

With Democrats enjoying absolute dominance of the state Legislature, Newsom’s unilateral dictates will not be challenged by the lawmaking branch of the state government.  And, with the state’s media at least as dominated by leftists as the national media, few voices will be heard by the public, who have been passively accepting economic strangulation in the name of safety, and now in the name of racial grievances.

There are real victims of this high-handed maneuver: businesses like restaurants that have been barely keeping their noses above water will go bankrupt and close permanently, and their employees will be jobless.  I am an investor in a restaurant that was thriving until COVID, and despite the valiant efforts of its manager to stay alive, this may be the death blow.

Update: There are signs of revo; against Covid restrictions if you venture beynd the populous coastal enclaves. Michael Lewis writes at Bloomberg:

[Matt] Pontes is now the county executive officer of Shasta County in Northern California and goes to work in thin socks, but another crisis has found him. “You cannot get closer to total disobedience of any kind of law,” he said, referring to the local response to Covid-19 strictures. “What’s happening up here is full-on anarchy.” Then he listed for me a few of the things that had happened recently: The county sheriff had announced that he wouldn’t enforce the state’s pandemic restrictions on social gatherings and businesses. People who had never before attended county board meetings were accusing local officials of treason. The county’s health officer, who had the unhappy job of imposing the state’s Covid rules on the citizens of Shasta County, was now receiving so many threats that Pontes had brought in a new threat-assessment team; he’d also ordered the bushes cut back away from her house, installed a security system and floodlights, and ordered police patrols of her neighborhood. “She still doesn’t feel safe out there,” he said. “At all.”