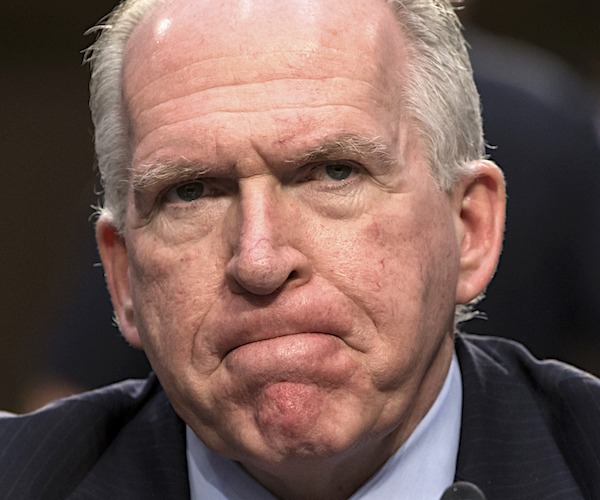 CIA Director John Brennan tells the Senate Intelligence Committee that Islamic State militants are training and attempting to direct and inspire attacks against its foreign enemies, as in the recent attacks in Paris and Brussels, on Capitol Hill in Washington, Thursday, June 16, 2016. (AP Photo/J. Scott Applewhite)

Brennan’s handwritten notes were declassified by Ratcliffe and sent to the House and Senate Intelligence Committees, according to Fox News.

“Today, at the direction of President Trump, I declassified additional documents relevant to ongoing Congressional oversight and investigative activities,” Ratcliffe said in a statement to Fox News.

The notes, which are heavily redacted, were jotted down after he briefed Obama on intelligence the CIA received, according to a source familiar with the notes.

“We’re getting additional insight into Russian activities from [REDACTED],” Brennan notes state. “CITE [summarizing] alleged approved by Hillary Clinton a proposal from one of her foreign policy advisers to vilify Donald Trump by stirring up a scandal claiming interference by the Russian security service.”

In the margin, Brennan wrote “POTUS,” but the rest is redacted. The note has the date “on 28 of July” on it.

“Any evidence of collaboration between Trump campaign + Russia,” the notes state.

The rest of the notes are blacked out, but margins are visible. The margins say “JC,” “Denis,” and “Susan.”

The declassification of Brennan’s notes come after Ratcliffe shared other newly declassified information with the Senate Judiciary Committee last week.

That intel revealed in September 2016, U.S. intelligence officials forwarded an investigative referral on Hillary Clinton that alleged she had approved “a plan concerning U.S. presidential candidate Donald Trump and Russian hackers hampering U.S. elections” in an attempt to divert the public’s attention from her email scandal.

That referral was sent to then-FBI Director James Comey and then-Deputy Assistant Director of Counterintelligence Peter Strzok. Last week, Comey told a Senate committee he did not recall receiving an investigative referral on Clinton from 2016.

Critics have argued the intel is Russian disinformation. Ratcliffe says it is not. He also declassified the CIA memo that was sent to the FBI.

“To be clear, this is not Russian disinformation and has not been assessed as such by the Intelligence Community,” Ratcliffe said in a statement to Fox News. “I’ll be briefing Congress on the sensitive sources and methods by which it was obtained in the coming days.”

A source told Fox News the declassified information is “not Russian disinformation.”

Another source familiar with the documents told Fox News that “this information has been sought by hundreds of congressional requests for legitimate oversight purposes and was withheld for political spite — and the belief that they’d never get caught.”

The source noted the Brennan notes are significant because it is “their own words, written and memorialized in real time.”