Numerous patriot sites across the web are reporting outages today. We knew this day would come, the nature of evil made it inevitable. It is now time for the good and moral citizens of the earth to rise, like a Mighty Wind.

Leader.com has been down for 24 hours with suspiciously vague excuses coming from engineering at a hosting service that Leader has used since 1997.

At least two of Michael McKibben’s interviews with Douglas Gabriel and John Barnwell exposing the British Pilgrims Society and its seditious Crown Agents in the Senior Executive Service (SES) have been removed from YouTube for “violating Community standards.”

It’s a sad day for America and the world when the TRUTH violates community standards.

The AFI site is now being actively shadow-banned.
(https://americans4innovation.blogspot.com )

In addition, Leader.com emails are being marked as “spam” by numerous Internet Service Providers. This is a situation that can usually be resolved by a complaint to your email provider, who will no doubt wonder, Gee Beav, how did the leader.com domain was added to the spam-block list? Such are the new euphemisms of totalitarian censorship.

It appears the pre-election shut down of the conservative and Christian perspectives has begun.

*support@jumpline.com is where to send the complaints about Leader’s site being down

Many of you use WordPress interface software thinking they may be the problem. They might be, but we posit that the real problem is the underlying Internet Service Provider (ISP) that you use. Increasingly, over the last 10 years, the local ISPs have merged into interlocking Pilgrims Society companies ultimately controlled by AT&T, Verizon, Google, Facebook, IBM, Sprint, T-Mobile, Orange, British Telecom, Deutsche Telecom, etc. The phone companies are still regulated companies. WordPress, Facebook and Google are not regulated. We suggest you are better served focusing your complaints and political action on the regulated entities. Flood their switchboards, customer service and support email accounts.

Leader Technologies asks AFI readers to flood Leader’s Internet Service Provider, Jumpline, with complaints and requests to get Leader’s corporate website back up. Send those emails to support@jumpline.com with the subject “Leader.com, Trouble Ticket No. 962276.” Each support email is logged in Jumpline’s database. Jumpline has been bought out by Deluxe Corporation c/o Jumpline 3680 Victoria Street North Shoreview, MN 55126. 1.800.651.2028, so if their engineering group cannot get Leader’s website up, then Deluxe will be the next focus of political action escalation.

ALL of the AFI content and evidence is backed up and available. If you need articles, posts and primary evidence, just to ask. Send all requests to afi@leader.com or to American Intelligecne Media.

We may all “go dark” as demonic forces attempt to overtake America, silence free speech and make America communist. When and if we go dark, rest assured that we will adjust our strategy and keep pounding down Satan’s citadels. Recognize that our research has been years ahead of the enemy. You are well-armed now with evidence that will eventually put the devils to flight. You are prepared.

In their Miller Act Notice, Leader Technologies has put into President Trump’s hands the quickest way for him to restore FREE SPEECH. All the President needs to do is start writing checks to Leader Technologies. Even in these checks Leader has proposed a way that the We the People earn revenue from their proposal. It is a Win-Win. In turn, Leader will provide a global master license for all social media on the planet. Then, the President can require a new End User License Agreement for all social technologies, otherwise they will lose their government contracts.

With the Miller Act, the President can require respect for the U.S. Constitution and Bill of Rights of all technology and media, overnight. He can force them to do with his bully pulpit what they did not do by their moral choices, if they want to stay in business.

Here’s a quick summary of what needs to happen. Here’s a link to these pages. Free Speech Elections, Now! | https://tinyurl.com/yy9t4vjb 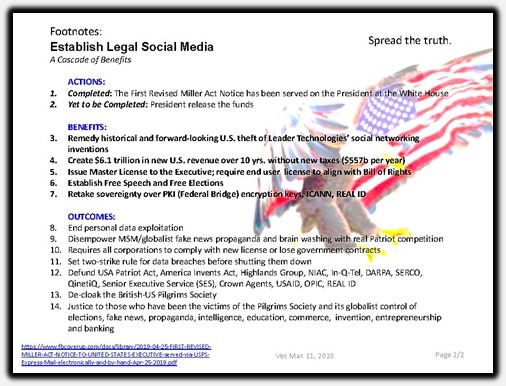 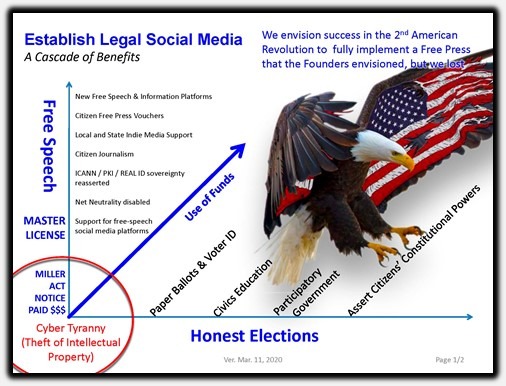 Notices: This message and its links may contain opinion. This information should not be relied upon without independent verification. Think for yourself. No claims are made to the properties of third parties. For educational purposes only. Fair Use relied upon.