‘Put the Animals in Jail’ — POTUS 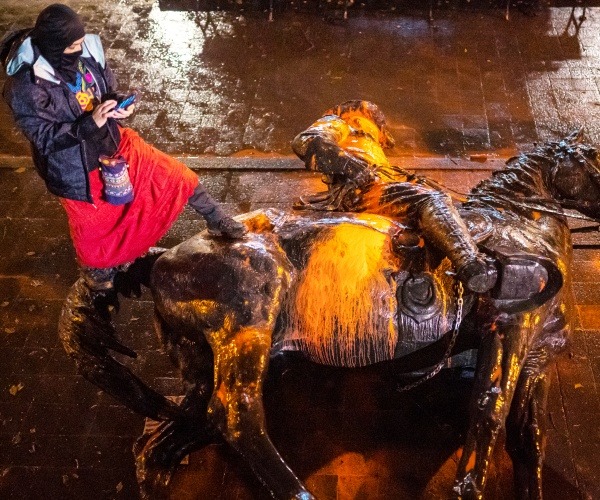 A protester stands over a toppled statue of President Theadore Rosevelt during an Indigenous Peoples Day of Rage protest on October 11, 2020 in Portland, Oregon. (Nathan Howard/Getty Images)

Some 200 protesters in Portland, Oregon, tore down the statues of Presidents Theodore Roosevelt and Abraham Lincoln Sunday night in riots that had been billed as “Indigenous Peoples Day of Rage” by organizers, The Oregonian reported.

The demonstrators, some carrying weapons, marched through town before toppling the statues and smashing windows at the Oregon Historical Society.

Police declared the event a riot and ordered the group to disperse, saying anyone involved in “criminal behavior, including vandalism” was subject to arrest, although it is unclear if arrests were indeed made, USA Today reported.

In a series of tweets reacting to the riots, President Donald Trump wrote “Put these animals in jail, now. The Radical Left only knows how to take advantage of very dumb ‘leadership’ fools. This is Biden! Law & Order!”

In another message on Twitter, the president declared that “The Radical Left fools in Portland don’t want any help from real Law Enforcement which we will provide instantaneously. Vote!”

A banner that read “Stop honoring racist colonizer murderers” was also displayed at the Oregon Historical Society during the demonstration, according to The Hill.

The protest, which was held a day before Columbus Day, comes in the aftermath of months of demonstrations in the city against racial injustice following the Minneapolis police killing of George Floyd in late May, an unarmed black man.