Did Anyone Notice Anything Weird About the Biden/Harris Victory Party? Fraud Exposed! (Video) 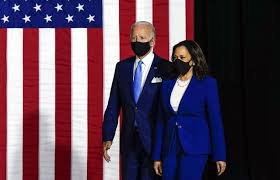 As our country is in the throes of a corrupt election process, Joe Biden and Kamala Harris, have claimed a premature victory. At their victory party, something was off. Lenora Thompson poses the question: did you notice anything weird about the Biden/Harris Victory Party? Correction…things. Plural. I mean apart from the glaring “Ummmmm, steal elections much!?!” thing.

She and her husband particularly noticed that no one in the crowd was smiling until they realized the camera was upon them. Then it was nothing but pearly whites! The people who were “too afraid of catching COVID” to vote in person were suddenly towers of strength, showing up in person to scream and dance.

And those Jeeps! Those showroom perfect vehicles again used to flesh out the meager crowd. The same props, I mean Jeeps, that were used in the same way on Election Night. (See video) Not one was driven away when the crowd dispersed.

Suddenly there were American flags. All identical. All spanking new. Some dragging on the ground which irritated Michael no end.

But they were the only symbol that anything vaguely American or patriotic was going on. There were no chants of “USA! USA!” and definitely no patriotic music.

And then things got even weirder. A normal acceptance speech would include a gracious paragraph, “It was a hard-fought race. I want to commend my opponent, President Trump, on an excellent campaign and…” blah, blah, blah.

The video below exposes the fraud in realtime.

Perhaps what was left out of Joe’s speech was the only honest part. He left it out because he knows it’s not true. Even the MSM and Twitter are hedging their bets, referring to Mr. Biden as the “Projected Winner.”

Was it just my imagination or did he also forget to say “thank you for working on my campaign” (because no one did) and “God bless America”? It sounded more like he was still campaigning…and maybe that’s exactly what this was if they consider a do-over imminent.

All we saw tonight was a PR event that made Biden and Kamala look ridiculous. We’ll look back on this evening and laugh when the true winner of the election (and we all know who that is) is formally validated and stays in the White House for four more glorious years.

I guess this is “blab it, grab it” politics. But the MAGA crowd is big enough and gracious enough and confident enough to let you enjoy your celebration. Goodness knows we’ve been having a blast for the last four years!

Donald Trump Jr summed it up best when he tweeted, “70 million pissed off Republicans and not one city burned to the ground.”

But at least now we know where Hunter is!