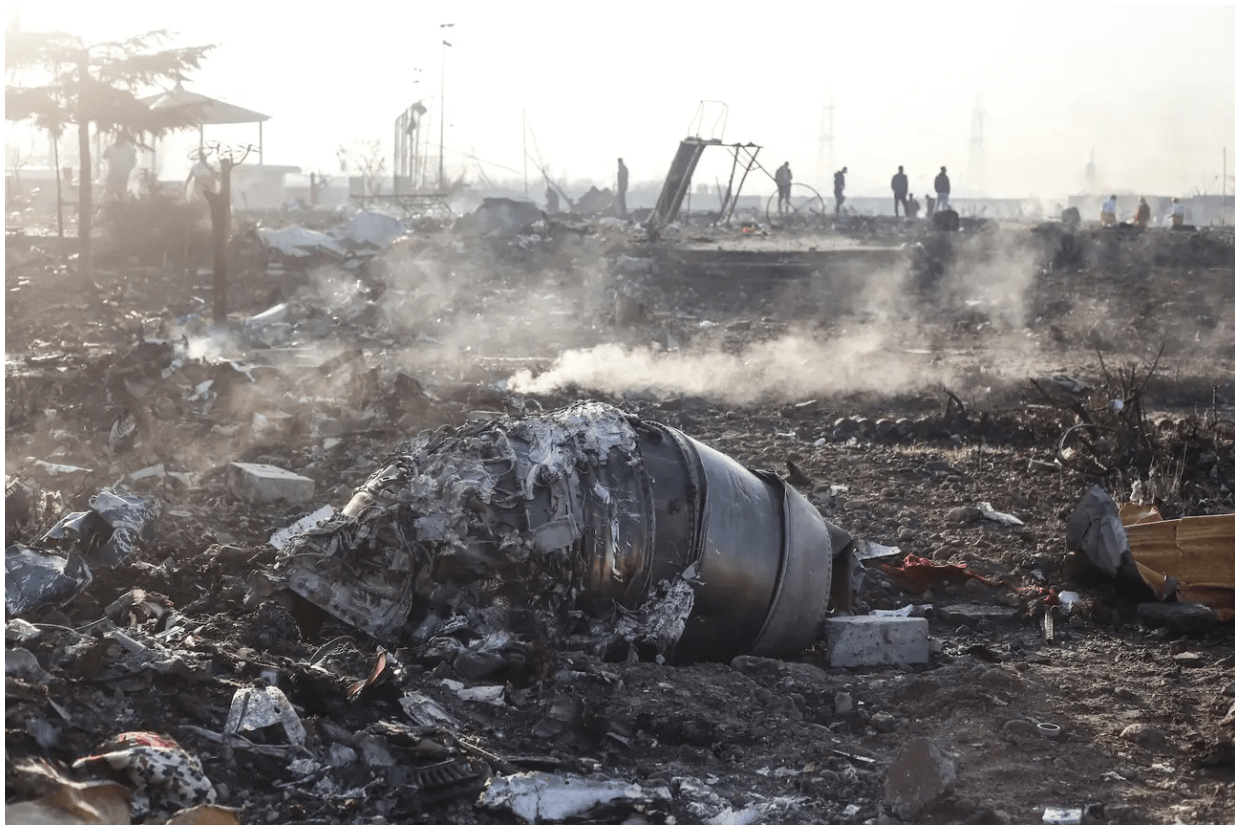 Debris of Ukraine International Airlines Flight 752 near the airport in Tehran on Wednesday. Mahmoud Hosseini/picture alliance via Getty Images

The perfect timing of the takedown of the Ukrainian airliner in Tehran ought to be the biggest clue of all.

That the C.I.A., Mossad and MI6 either shot down that passenger jet or placed a bomb before takeoff or hacked the Iranian air defenses to trigger a shootdown should be a foregone conclusion.

Why, pray tell, would Iran ever shoot down a commercial jet right after takeoff in Tehran?

Yes, Iran did apologize after taking responsibility for the tragic yet fastidiously executed black operation, but there are specific reasons for this.

What follows is a quite likely scenario that cannot even be admitted by Tehran because of the extremely complicated back story that would necessarily expose highly classified info.  It would also present an Iranian military that has been penetrated by Israeli agents and Mossad spies as well as an air defense system severely compromised by cyber-terrorists in Tel Aviv.  Perhaps this is why Tehran took full responsibility for the tragedy so embarrassing is the infiltration by Israel on several levels.

Did Israeli cyber-terrorists hack the Iranian air defenses to trigger the Ukraine airliner shootdown after the plane was sabotaged forcing a turnaround?

Clearly, the way that so many of the Western powers piled on Iran in the immediate aftermath of the engineered tragedy (WITHOUT A SHRED OF EVIDENCE INITIALLY) clearly indicates a highly coordinated international psyop-in-progress.

Or, did the perps and their cover-up collaborators really have evidence.  Evidence of their own involvement in a stealthy black operation designed to humiliate Iran as a diversion from Trump’s egregious war crimes in Iraq.  Each nation that prematurely accused Iran did so as if on cue because the inside players who really knew what happened informed the accusers.

Could there have been a more effective psyop than shooting down a Ukrainian passenger jet in Tehran in order to quickly distract the entire world community of nations from Trump’s illicit warmongering in Iraq?!

Here’s what the Iranian government has to say about this ongoing “psychological operation”.

On the order of President Rouhani, results of the technical examinations will be made available immediately and regularly to the public, especially bereaved families.

“Today, in a very well-calculated move in psychological operations as quoted by an informed source of Pentagon who spoke on condition unanimity has published news pompously that two missiles hit the Ukrainian plane. This is a lie and nobody will claim responsibility of the big lie.”

The statement also recommended the US government to attend to the results of the investigation committee instead of lying and developing psychological operations.

Let’s face it: In light of President Trump being exposed as a “Cold-Blooded Murderer and International Terrorist” by the Iraqi Prime Minister, his rogue C.I.A. did what they always do—D I S T R A C T.

No one does it like the U.S. Intelligence Community.  They are hard-wired to run interference in the interest of conducting any cover-up necessary just like the one that Trump is now in desperate need of.  The C.I.A., MI6 and the Mossad execute diversionary ops like they’re taking a walk in the park.

In the face of damning reports about Trump’s war crimes just committed in Iraq, the intel community knows they have to marshal all the misdirection required to change the worldwide discussion.

Especially when the public discourse in America concerns the following highly consequential accusations is Team Trump working triple time.  After all, with SOLEIMANIgate Blown Wide Open, Trump’s re-election prospects have been put in serious jeopardy.

Really, does it get any more serious than this:

[Speaker of the Council of Representatives of Iraq] Halbousi attended the parliamentary session while almost none of the Sunni members did. This was because the Americans had learned that Abdul-Mehdi was planning to reveal sensitive secrets in the session and sent Halbousi to prevent this. Halbousi cut Abdul-Mehdi off at the commencement of his speech and then asked for the live airing of the session to be stopped. After this, Halbousi together with other members, sat next to Abdul-Mehdi, speaking openly with him but without it being recorded. This is what was discussed in that session that was not broadcast:

Abdul-Mehdi spoke angrily about how the Americans had ruined the country and now refused to complete infrastructure and electricity grid projects unless they were promised 50% of oil revenues, which Abdul-Mehdi refused.

I was supposed to meet him [Soleimani] later in the morning when he was killed. He came to deliver a message from Iran in response to the message we had delivered to the Iranians from the Saudis.

This is why I visited China and signed an important agreement with them to undertake the construction instead. Upon my return, Trump called me to ask me to reject this agreement. When I refused, he threatened to unleash huge demonstrations against me that would end my premiership.

Huge demonstrations against me duly materialized and Trump called again to threaten that if I did not comply with his demands, then he would have Marine snipers on tall buildings target protesters and security personnel alike in order to pressure me.

I refused again and handed in my resignation. To this day the Americans insist on us rescinding our deal with the Chinese.

After this, when our Minister of Defense publicly stated that a third party was targeting both protestors and security personnel alike (just as Trump had threatened he would do), I received a new call from Trump threatening to kill both me and the Minister of Defense if we kept on talking about this “third party”.

(Source: Firsthand Testimony Proves Trump Outright Lied About Soleimani—But It’s Much, MUCH Worse Than That)

There are several reasons why this airliner takedown was likely a transparent black operation carried out by the enemies of Iran.  One of the most apparent reasons is this juvenile ploy executed by the Western intel community.  See the following highly suspicious video in the link below:

Really, these night-time photogs just happened to have their smartphone cameras aimed at the exact part of the sky when the Ukrainian plane lit up! How did that happen unless they were told precisely where to be and what time to video?

*Special Note: If there’s one incriminating piece of evidence which indicates that this shootdown was highly planned in advance of Trump’s rampage in Iraq and orchestrated by all the usual false flag culprits, it is this video that should never have been taken.

Trump is toast … … … as he should be after his despicable, repugnant and reprehensible war crimes perpetrated against both the Iranian and Iraqi people.