Cultural Marxism Is Always The Precursor To Genocide

The Precursor to GENOCIDE 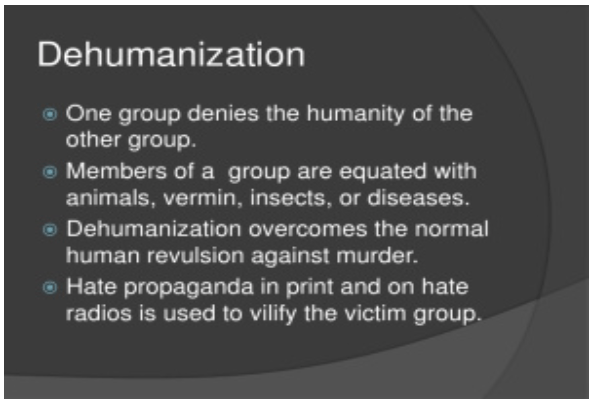 The dehumanization tactics were put on disgusting display by Don Lemon and friends on CNN, Wednesday January 26th 2020! https://youtu.be/fk54qPfOwkI

However, this infuriating display of lies, disinformation and slander against President Trump, his administration and his supporters has been ubiquitous in places like CNN, MSNBC, ABC, The New York Times, the Washington Post and the bought and paid for MAINSTREAM MEDIA day after day since 2016.

This dehumanization process was begun by Hillary Clinton during the 2016 US Presidential Election campaign when she branded half of the country, because they were President, Donald Trump’s supporters, as being nothing more than a “Basket of Deplorables!”

Clinton was helped with this dehumanization process shortly after Trump was elected by the media, which was best displayed by MSNBC cable news host Nicolle Wallace who declared that “People in the Trump administration do not appear to be human beings!”

Ever since that time, Brietbart News has been documenting the over 600 acts of media approved violence and harassment that has been committed by them and those who they have inspired against Trump supporters since Donald Trump became the duly elected president of the United States of America in 2016.

CNN and MSNBC are in the process of being sued for slander, libel and misrepresentation as we speak. However, no one seems to be getting fired for their tortious, treasonous and criminal conduct. Only those who support Trump and are pointing out the truth about the leftist media mafia who runs the fake news are feeling the wrath of those who control the liberal narrative in our screwed up society at present!

As we contemplate the grim significance of an America populated by an “unaware compliant citizenry”, add to this the NBC News article that was published on the same day, titled “Oh My God, Sanders Can Win: Democrats Grapple With Bernie Surge in Iowa!”

These new polls found 70% of Millennials are likely to vote for a socialist like Bernie Sanders.  Millennials comprise 30% of the US population.

This, just after Project Veritas  proved to all the world that the Bernie Sanders Campaign was infested with Criminals and Communists with plans to use guillotines and concentration camps on Trump supporters, conservatives and Christians “when, not if,” Sanders wins. If not, they plan to burn down the Democratic National Convention in 2020. https://youtu.be/JC3V2vTTrx4

The future in store for “Deplorables” as described by Sanders socialist supporters, and documented on camera by Project Veritas is a future where they say they’ll “guillotine the rich and incarcerate the rest in re-education gulags!”

The same Sanders supporters suggested that once they take power the first question that they would address is: “Do we just dissolve the Senate, House of Representatives, and the Judicial Branch?” Since in its present form this is a government they’d have to destroy for what they plan to do next

They described this by stating: “What will help us is when we abolish landlords, and send all the Republicans to the re-education camps!”  In reality, they will be extermination camps, which these socialist Sanders supporters compare to Soviet communist gulag death camps to be “a good thing.”  https://youtu.be/4zpCVM0delQ

The tactics of genocidal dehumanization began seeping into the awareness of normal societies back around the time of the 19th Century during the lifetime of philosopher Søren Kierkegaard who, while widely considered to be the first existentialist philosopher, is globally regarded as being modern history’s most influential Christian theologian and moralist! His quotes are as follows:

“Personality is a synthesis of opposing elements which leads us to understand the concept of scapegoating in dialectical terms, and in relation to the spheres of existence which humanity divides itself into.”

“For those who inhabit the aesthetic sphere of existence, such as the Nazis, the creating Word of God continually brings the possibility of redemption and new life.”

“This possibility is feared and is struggled against in Mein Kampf. “

“The demoniac personality attempts to fight off the possibility of its “destruction” by finding scapegoats and destroying them.”

“The sphere of existence opened up by Marxism is a mirror image of Nazism.”

“Here, the scapegoat which is killed is the symbol of the sinful past which has been left behind in the wake of the righteous revolution.”

“The scapegoat now represents the ego centric, backward, “aesthetic” being who is responsible for the alienated condition of society.  The revolutionary has escaped from this “bourgeois” sphere of existence, and now turns against it with a vengeance, separating himself from it completely.”

“In this we can see the “anxiety before the evil” which signifies once again the human avoidance of becoming a self, a paradoxical synthesis.”

“Stalin’s purges were a working out of the inner dynamic of this form of flight from God.”

“The struggle between Nazism and “Bolshevism”

Note: I have replaced “Stalinism” with “Bolshevism” in this quote for the sake of accuracy—the struggle was set up at that time and has continued on in the form of the struggle between the capitalist West and the communist East, the so-called Cold War.”

Note: I believe that Communism has replaced Bolshevism and Fascism has replaced Nazism and they are at war with each other within the United States of America to this very day.

Neither is good for the future of the American people. What we intend to do about it will be the deciding factor as to whether America lives or she dies in the 21st Century!

Today, we are living in a paradox of two competing realities. Both sides are convinced that they are absolutely perfect and that the other side is the opposite. This diabolical scheme of divide and conquer is doing exactly what Soros, Rothschild, Schiff and the other monsters among us have always planned. There is no winning unless we quit fighting each other and focus on those pulling the strings.

In Kierkegaardian terms this is a struggle between the aesthetic and the ethical spheres of existence.

I see the conflict today in terms that one human being can understand, and especially in the melting pot of America. That being the conflict between Nationalism and Globalism, between Freedom of human expression, creation and “natural” human evolution and “Cultural Marxism”, which is a world of dystopian, un-natural, hive-minded collectivism.

A perfect example of how human expression has been stifled and controlled in an unnatural way is in the interventions in American music; for example, rock and roll was a natural evolution that built upon African-American Blues, Soul, Jazz, and Gospel. It was then taken over, controlled and turned into Gangsta Rap for the specific purpose of undermining black culture and American Music in general starting in the 1990s.  The interesting question is why, how, by whom and for what diabolical purpose? http://www.viewzone.com/rap.html

For those of us not steeped in Kierkegaardian knowledge, it’s not easy to understand, identify or even believe that we might live in a country where the “anxiety before the evil” is beginning and its “scapegoated shadow of the future” victims are being prepared for: “State-sanctioned genocide.” Most Americans would be horrified if they understood what is waiting to engulf their normal, protected realm of existence.

However, America has not been without it’s Paul Reveres or it’s “canaries in the coal mine” as a group identified with the secretive Kierkegaard organization known as the “Soren K. Group” warned in 2016 that “the United States was in grave danger!” This is a group that follows Kierkegaard’s style of intellectual interrogation by writing under numerous assumed names.  On November 1st, 2016, they published their warning letter titled:

“The two leaked emails that scare us the most”

These secret emails of Hillary Clinton and the DNC were suddenly released along with tens-of-thousands of others to the public during the closing weeks of the 2016 election. The first one warned that Hillary Clinton took money from countries that she knew were funded by ISIS and other terrorists. The second on was terrifying!  It was written by one of Hillary Clinton’s top campaign aides named Bill Ivey and it said:

“As I’ve mentioned, we’ve all been quite content to demean government, drop civics and, in general, conspire to produce an unaware and compliant citizenry. The unawareness remains strong but compliance is obviously fading rapidly. This problem demands some serious thinking and not just poll-driven, demographically-inspired messaging.”

“They deplore us because we are aware of the danger that they pose to our freedoms, and what they have done and will continue to do to destroy our country unless we stop them!”

Kierkegaard knew the dangers of a nation being populated by an “unaware compliant citizenry” seeking constant new forms of entertainment to distract themselves and wrote:

“Since boredom advances and boredom is the root of all evil, no wonder, then, that as the world goes backwards, that evil spreads.”

However, I contend that there is more to the problem than boredom since other elements have to be in place to create the syndrome of boredom. There is only one universal type of existence from which boredom can arise and it is as is follows:

“When the ability or means for the advancement of self or of  human creativity is aborted over and over again, or it is forced or channeled in an unnatural and unfulfilling way, then the world goes backwards and evil in the world spreads.”

Americans have been living under the dystopian yoke of Cultural Marxism for over two decades, as everything we have created and worked for has been stolen and sent off to China and other countries.

The only known antidote for this is the awakening of people to true things so that they can learn how they are being manipulated into hate and being led to their own destruction by the same type of powers who have manipulated our planet since history began. 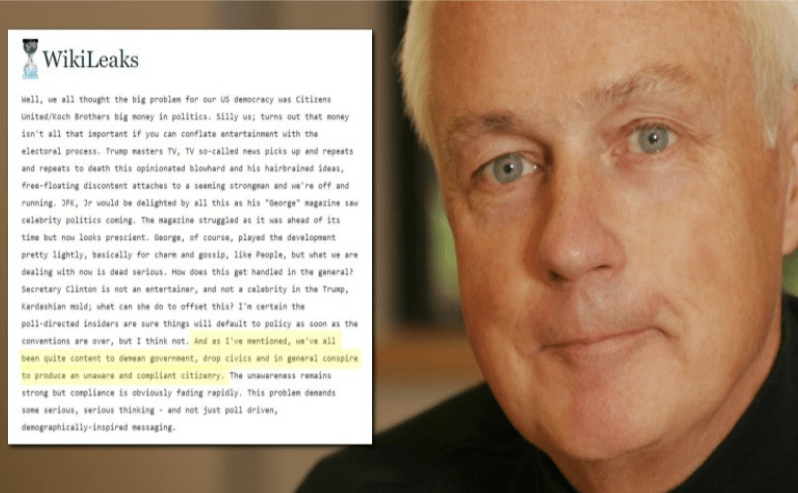 “As I’ve mentioned, we’ve all been quite content to demean government, drop civics and, in general, conspire to produce an unaware and compliant citizenry.”