Amid years of strange, unconventional friendship, Johnny Depp and the late Hunter S. Thompson developed a relationship built on trust, love and admiration.

It was back in 1998 when Thompson’s iconic piece of Gonzo journalism, Fear and Loathing in Las Vegas, was adapted into a film by director Terry Gilliam. The high profile project, which went on to be hugely successful at the box office, starred Johnny Depp in the lead role. It was from that moment onwards he and Thompson developed a close understanding.
(Source: Enjoy Johnny Depp reading letters from his close friend Hunter S. Thompson)

The preceding excerpt says it all.  That is, of course, if you know what “all’ is.

First, it’s crucial to understand that the original American gonzo journalist was a chap by the name of Hunter S. Thompson.  Thompson could be described as the original Alt Media investigative journalist with an axe to grind with the establishment.

Having been born in 1937 made Thompson a generational beatnik; only in his particular case a Beatnik journalist on super-steroids.  Which means he had a penchant for looking under any rock and telling the rest of the world exactly what he saw, no matter how ugly the warts and warthogs he saw.

KEY POINT: Because of the overwhelming influence exerted by the Beat Generation on the Baby Boomers, the Vietnam War was effectively shut
down by a popular movement comprised of Beatniks and Boomers—the
first time in world history that a corporate war was terminated by We the
People. Such was the metaphysical power and extraordinary courage
demonstrated by the Beatniks post World War II.  They were the original
anti-establishment and countercultural iconoclasts; free-thinking and
independent non-conformists to their last breath.  That’s how dangerous
these folks were to the New World Order agenda.

If a true-blue Beatnik were to incarnate as an American journalist, he would surely take on the body and being of Hunter S. Thompson.  For example, Hunter Thompson’s first piece of professional journalism that earned him the moniker of “gonzo journalist” was titled: The Kentucky Derby Is Decadent and Depraved.  You can imagine what that unprecedented exposé was all about … and how it tagged Thompson as the most dangerous journalist on planet Earth at that time.

When you think of an appropriately irreverent Hollywood actor who is also “beatnik” in their thinking, their lifestyle, their public persona, their acting roles, isn’t Johnny Depp the first to come to mind?!

So, you can imagine what happened when these two blokes met for the very first time.  Hunter must have instantly wondered why Johnny was born 25 years later than he should have been.

Hunter Thompson, being one of the original Beatnik conspiracy theorists, was well aware that 9/11 was not only a false flag operation, but also a US government-conducted inside job.  The following excerpt was taken from Thompson’s Wikipedia page.

“After the September 11 attacks, Thompson voiced skepticism regarding the official story on who was responsible for the attacks. He speculated to several interviewers that it may have been conducted by the U.S. government or with the government’s assistance …”

According to his [Hunter Thompson’s] widow, Anita, the $3 million funeral was funded by actor Johnny Depp, who was a close friend of Thompson’s. Depp told the Associated Press, “All I’m doing is trying to make sure his last wish comes true. I just want to send my pal out the way he wants to go out.”

The salient point here is that Thompson and Depp were closer than blood brothers.  And, everything that Thompson knew about the establishment and their dirty little secrets, Depp would also come to know, and in the most intimate and graphic details as only Thompson knew them.

Just how familiar was Thompson with the CIA’s MK-ULTRA mind control program and satanic ritual abuse, child trafficking and sexual abuse, adrenochrome and snuff films, as well as pedophilia and pederasty routinely practiced at the highest levels of American government?  Consider the testimony rendered in this post: Hunter Thompson: Pedophile Snuff Film Director at Bohemian Grove

KEY POINT: Hunter S. Thompson died on February 20, 2005, in Woody Creek, CO by way of a very suspicious suicide, according to the Coroner’s Office.  However, there were several oddities pointed out “such as how, even though Thompson’s gun lacked a silencer, its discharge was only heard by his wife and son as a low thud”.  Some conspiracy websites wrote that “Thompson’s death was a hit job carried out by the FBI. Those conspiracy sites claim that Thompson knew about 9/11 being an inside job, so the government hushed him up.”
Source: THE TRAGIC DEATH OF HUNTER S. THOMPSON

Now fast forward to 2015 and a time when the establishment was being named on the Internet as the Deep State, The Illuminati, the London banksters, Bohemian Grove,  Council on Foreign Relations & Royal Institute of International Affairs, Bilderbergers & Trilateralists, Rothschilds & Rockefellers, Knights of Malta & Order of the Garter, Italian Black Nobility & Khazarian Mafia, etc.  Most significantly, Johnny Depp was married to Amber Heard from February 3, 2015 through January 13, 2017.

Because of his insider knowledge and direct experience at Bohemian Grove, Thompson was well aware of the whole New World Order agenda and Agenda 21 puzzle.  He knew well who all the principle players worldwide were.  David Rockefeller and Henry Kissinger, George H. W. Bush and Queen Elizabeth, George Soros and Hillary Clinton, among many other NWO globalists, he knew, were all a part in a highly complex global criminal conspiracy to take over the whole world under the rubric of a One World Government.

Well, guess what, since Thompson knew the plot inside and out, so does Johnny Depp.  Except that Johnny Depp has a massive worldwide following of fans and admirers who The Powers That Be were a little concerned about.  What if Depp decided to leave the Hollywood reservation of political correctness, they thought.

KEY POINT: Johnny Depp Learned Everything That Hunter Thompson Knew About the Power Elite and Pedophilia.  There is perhaps no greater scandal involving Washington, DC elites than the Franklin child prostitution ring scandal, which actually made it to the front pages of the mainstream media only to be quickly covered up just as Pizzagate was.

In his own words from his gonzo classic “Fear and Loathing in Las Vegas” … and into Johnny Depp’s mind:

“San Francisco in the middle sixties was a very special time and place to be a part of. Maybe it meant something. … It seems entirely reasonable to think that every now and then the energy of a whole generation comes to a head in a long fine flash, for reasons that nobody really understands at the time … There was a fantastic universal sense that whatever we were doing was right, that we were winning. … that sense of inevitable victory over the forces of Old and Evil. …. Our energy would simply prevail. … We had all the momentum; we were riding the crest of a high and beautiful wave. … So now, less than five years later, you can go up on a steep hill in Las Vegas and look West, and with the right kind of eyes you can almost see the high-water mark — that place where the wave finally broke and rolled back.”[1]

Just how justifiably cynical and skeptical, suspicious and distrusting was Hunter Thompson about just about everything produced in America?

“One of the things Thompson wanted America to do better was fulfil the promise of the 1960s. Some of the novel’s most trenchant criticisms are levelled at counter-cultural gurus like Timothy Leary who, it seems to Duke, set up new regimes of authoritarianism to replace the old. One of the novel’s most famous passages reveals its bitter nostalgia.”[1]

Which means TPTB had to send in what they thought would be the perfect and very powerful secret weapon: Amber Heard.

Especially an Amber Heard who is the product of the CIA’s MK-Ultra mind control program who was willing to do whatever it took to keep Johnny Depp from ever leaving the reservation.

[1] Guide to the classics: Fear and Loathing in Las Vegas 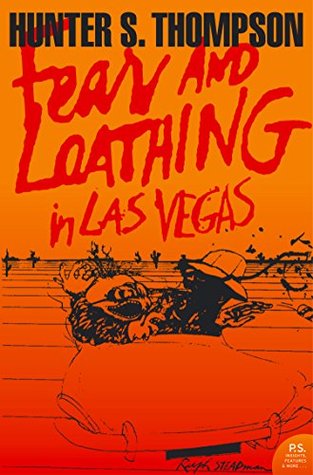