Will the Democrats resort to premeditated murder?

Until the Senate confirmation vote for the new SCOTUS justice is completed, every Republican senator had better watch their backs as well as each others.

Democrats have repeatedly proven they
will do whatever is necessary to prevent
a conservative from being appointed as
RBG’s replacement.  Again, the Left will
do anything, including committing any
type of odious crime, that will thwart the
reconstitution of a Right-leaning SCOTUS.

SOTN Editor’s Note: Even Senate Majority Leader Mitch McConnell is telling the GOP caucus to “to keep their powder dry” because of what lies ahead in the Senate confirmation process.  The entire Republican side of the Senate aisle knows that the Democrats go stark raving mad whenever it concerns a new SCOTUS appointment.  Where their madness can easily translate to manufactured mayhem and/or premeditated murder.  The recent MSM article posted below points that out in no uncertain terms.

BY JORDAIN CARNEY
The Hill 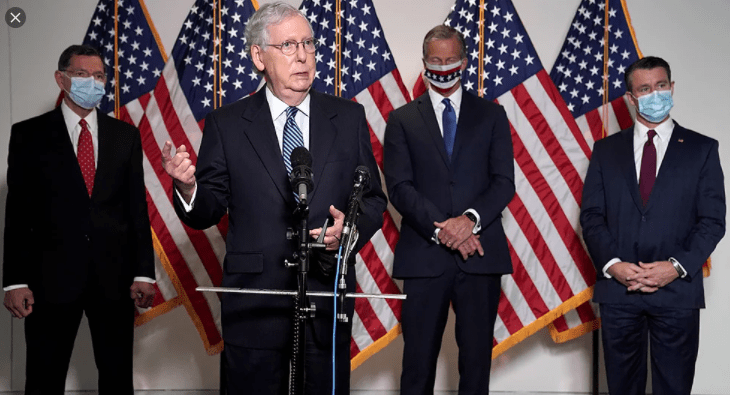 Senate Majority Leader Mitch McConnell (R-Ky.) is warning GOP senators undecided about filling an election-year Supreme Court vacancy to keep their “powder dry” amid an incoming onslaught of pressure to announce a decision.

McConnell in a letter to the Senate Republican caucus, obtained by The Washington Post, warned senators against locking themselves into a position and countered potential arguments for why they should not fill the seat made vacant by Justice Ruth Bader Ginsburg‘s death on Friday.

“Over the coming days, we are all going to come under tremendous pressure from the press to announce how we will handle the coming nomination. For those of you who are unsure how to answer, or for those inclined to oppose giving a nominee a vote, I urge you all to keep your powder dry,” McConnell wrote in the letter.

“This is not the time to prematurely lock yourselves into a position you may later regret,” he added.

Asked about the letter, a spokesman for McConnell declined to comment beyond a public statement the GOP leader released on Friday night in which he vowed that whomever President Trump nominates to fill the seat will get a vote.

Ginsburg’s death, less than 50 days before the November election, jolted an already unprecedented year that has seen both an impeachment trial and a global health pandemic.

Because Republicans left town on Thursday for the weekend, they were spread across the country in their home states as they weighed how to respond to news of the justice’s death. They will return to Washington on Monday afternoon and will gather for the first time as a caucus on Tuesday.

“I urge you all to be cautious and keep your powder dry until we return to Washington,” McConnell added to the caucus.

McConnell is trying to hold his 53-member caucus together months before an election in which both the Republican majority and the White House are up for grabs. The battle for control of the Senate is viewed as a toss-up, with Republicans playing defense in several key battleground states.

McConnell hasn’t tipped his hand on his thinking about if he will try to squeeze in a Supreme Court nomination before the election or wait until the lame duck.

To successfully get a judicial nominee through the Senate, he can lose up to three GOP senators and still let Vice President Pence break a tie.

No GOP senator has come out so far after Ginsburg’s death to say that they do not think the seat should be filled either before the election or during the lame-duck session.

But several have been noncommittal about filling an election-year vacancy or signaled they would oppose doing so with only weeks left to go until the November election.

Sen. Lisa Murkowski (R-Alaska) did not address what to do in her statement on Friday night. But she told reporters in Alaska on Friday, before news of Ginsburg’s death, that she would not support filing a vacancy before the election.

“I would not vote to confirm a Supreme Court nominee. We are 50 some days away from an election,” she said, according to Alaska Public Radio.

Sen. Susan Collins (R-Maine), who faces a difficult reelection bid, also sidestepped the issue in her statement on Friday night.

But she told The New York Times earlier this month that she also would not support filling a Supreme Court vacancy in the final weeks before an election, and would oppose filing the seat in the lame duck if the president lost in November.

“I think that’s too close, I really do,” she said.

One complicating factor could be the Senate race in Arizona, where GOP Sen. Martha McSally and Democratic nominee Mark Kelly are facing off for the final two years of the late Sen. John McCain‘s (R) term. Two election lawyers previously told the Arizona Republic that if Kelly wins, he could be sworn in to as soon as Nov. 30.

McConnell pledged on Friday night that whomever Trump nominates will get a Senate vote, saying Republicans will “keep our promise” to confirm the president’s judicial nominees.

“President Trump’s nominee will receive a vote on the floor of the United States Senate,” McConnell added.