The Well Hidden Agenda Behind the Democrat’s Election Coup

2020 Election Theft is Nothing Short of a Soft Coup
and Electoral Insurrection—But by who exactly? 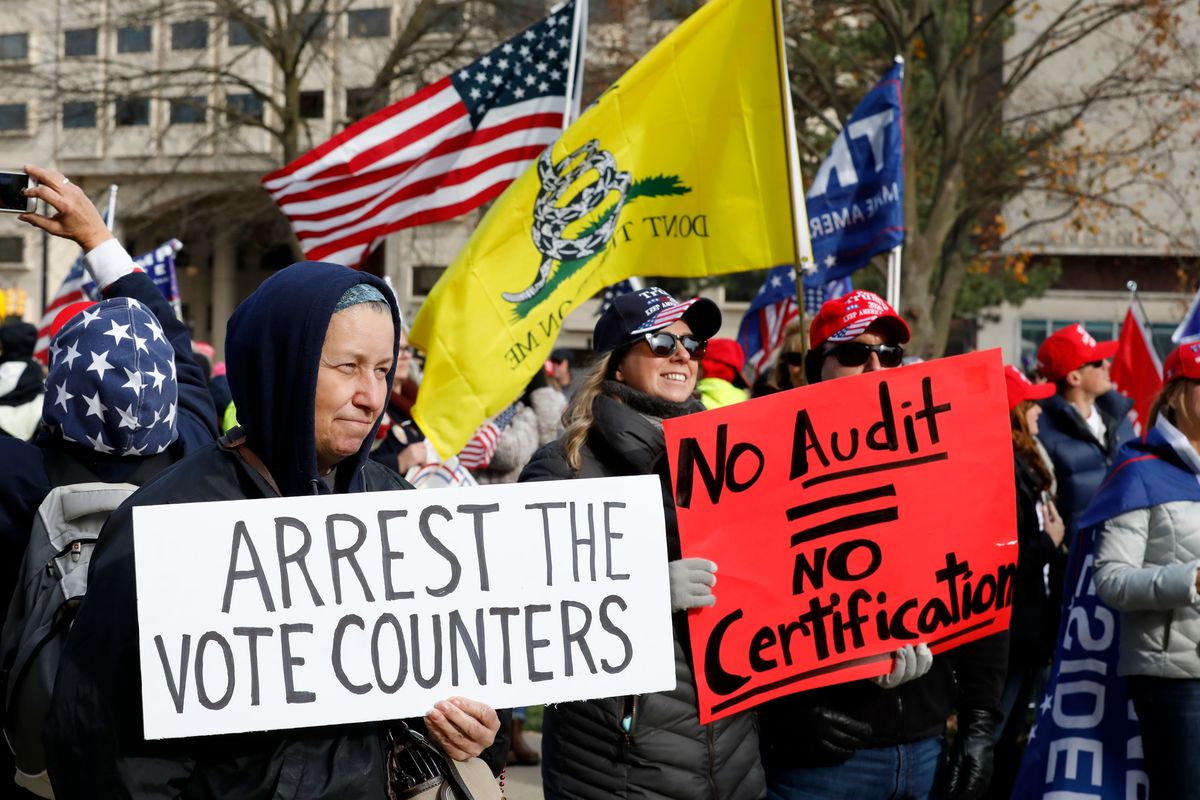 “Don’t be deceived: the NWO globalists, the Democrats, and Deep State don’t move right or left without orders from their hidden masters. There are several layers of decision-makers above these groups that are well-concealed.  One of those levels of the shadow government hierarchy does include the Central Banking Cartel and International Banking Crime Syndicate; for at the end of the day nothing gets done without money.  To steal an election right in the middle of Election Night takes LOTS of money.  Much of that money was thrown around during the months and years leading up to November 3, 2020.  The massive ongoing cover-up takes even more money to sustain.  So, the 64 thousand dollar question is: Why are the banksters really funding this “soft coup and electoral insurrection”?”

*SOTN Editor’s Note: The international banksters occupy a relatively low rung on the totem pole because they are easily known.  It you see them, hear them, can touch them, then they are mere pawns on the global geopolitical chess board of power and influence.  Yes, the banksters wield their economic warfare, financial terrorism, and corporate sabotage with awesome effect, but they’re only taking orders from their masters.  The real power behind the throne operates with utmost secrecy and never reveals itself; for it derives its supreme unchallenged power from its utter anonymity and continuous concealment. “The Kahal of the Cahilla”, the Black Nobility and the Khazarian Mafia are just three super-secret societies that exert total control over the banking elites.

BEWARE and BE AWARE: This whole election charade is being carried out with a high degree of intentional design.  There’s not a single element of this drama that has not been fastidiously pre-planned and meticulously executed.

Who didn’t know the Democrats were crazy desperate to steal every election in sight during the 2020 election cycle, especially the POTUS race?

Who wouldn’t believe that Team Trump was watching every stage of the transparent election theft and unprecedented vote fraud?

Given this obvious context, it ought to be clear that this entire election game has been set up by the power elite to quite effectively divide and conquer the American body politic.  And so it has.

The United States of America has been relentlessly exploited and victimized since the Federal Reserve Act of 1913 was signed on December 23, 1913.  That was the day the banksters completely took over the nation.  Truly, that was the dark day that will forever live in infamy.

World War I, Spanish Flu Pandemic of 1918, Great Depression, World War II, Assassination of JFK, Vietnam War, 9/11, COVID-19 Pandemic, THE GREAT RESET and the 2020 Election Theft are all the handiwork of the same international banksters.

Each of these cataclysmic events was deliberately engineered so that the power elite could more effectively divide and rule the entire planetary civilization.

NEVER, EVER, LOSE SIGHT OF THIS!

Because of what is about to play out across TV, smartphone and computer screens, it’s never been so critical to understand who’s pulling the strings throughout this extremely captivating USA episode of their disastrous Great Reset.

Now that they have everyone’s attention, and they do like never before, the banksters will press the button on THE GREAT RESET as a means of collapsing the Global Economic & Financial System (GE&FS).

The world community of nations has been witnessing a slow-motion controlled demolition of the GE&FS since the calculated demolition of the World Trade Center on September 11, 2001.  In point of fact, the deliberate destruction of the Twin Towers was purposefully carried out as an omen of things to come.  The Tavistock Institute calls it predictive programming.

For nearly 20 years the international banksters have been stealthily rearranging the global monopoly board before they flip the board over completely via THE GREAT RESET.

It’s surely no mere coincidence that THE GREAT SCAMDEMIC, THE GREAT STEALECTION and THE GREAT RESET have all been launched in 2020.  For it is with great planning and purpose that each of these gamechangers were initiated to mutually support each other as the power elite brazenly attempt to take outright control of planet Earth.

Yes, those who reside at the very peak of the pinnacle of the world power pyramid have exerted complete command and control over the planet for centuries, if not millennia.  However, the big difference in 2020 is that nations everywhere are being forced to submit to a surreptitiously forming One World Government under the patently false pretext of Medical Martial Law supposedly necessitated by transparently fabricated COVID-19 bioterrorism.

Of course, Joe Biden was identified as the premier pitman for the upcoming phase of OPERATION COVID-19.  Both Biden and Manchurian Candidate Kamala Harris were specifically chosen as the NWO frontmen for the CORONAhoax.  That’s why the perps are working assiduously to install Biden in the White House.

However, never to forgo the opportunity to sow seeds of profound discontent throughout the body politic, the power elite knew they had to get the American people fighting each other like never before.

Why are the banksters so determined to start American Civil War II?

Because when they pull the plug on the economy, as they have already done in earnest with the COVIDcon, they do not want to be anywhere near ground zero… or  in the line of fire.  For it is the Central Banking Cartel working in close collaboration with the International Banking Crime Syndicate that are directly responsible for the coming Second Great Depression—a far more devastating one than the 1930s.

All anyone has to do is clock the gross income inequality that has inexorably evolved over the past 20 years, particularly in the developed and/or industrial nations.  The obscene number of billionaires really represents the greatest transfer of wealth from the have-nots to the haves in recorded history.

The 1% is fully cognizant that this gross disparity in wealth relative to the 99% is going to come to head—BIG TIME!  Which is why they are desperately perpetrating so many global crime sprees this year.  As always, they need all the distraction and diversion they can get.  Does it get any bigger than THE GREAT SCAMDEMIC and THE GREAT STEALECTION and THE GREAT RESET!?!?!

Certainly folks are beginning to see the highly choreographed drama that THE GREAT STEALECTION truly is … … … just as many have awakened to the remarkably orchestrated melodrama aptly called THE GREAT SCAMDEMIC.

The real war that’s been raging around the globe for centuries is the war between the privileged and wealthy nobility & the powerless and destitute peasants.  It’s been an endless war that is coming to, first, a crescendo in 2020 and, then, to a final climax in 2021.

But why didn’t the Democrats just run with a candidate who could have really challenged Trump?

In fact, there are several reasons why the deeply flawed Biden-Harris ticket was foisted on the Democrat Party by their communist overlords.

First and foremost was the globalist intention to implement their ever-successful Ordo ab Chao strategy.  In this way, the DEMs are pissed — deep down inside — that they had to support such a depraved and degenerate, deviant and devious, demonic and devilish, debased and debauched, deplorable and dishonorable, disgraceful and disreputable, dirty and dreadful dynamic duo as Biden and Harris.  Such a cynical and calculated move has caused considerable consternation for the Left; nevertheless, in their extreme desperation to overthrow President Trump they consented to the election theft dirty deed.

Similarly, that the Democrat Party would ever nominate such an extraordinary reprobate, career criminal politician and incorrigible corruptocrat as Biden makes the Right go absolutely wild, particularly as the Left tries to deceitfully and unlawfully install him in the White House.

Now the American people are seeing, quite graphically, what divide and conquer really looks like.

Because the wealthy elites know in their bones that if We the People got wise to their shockingly calamitous betrayals and catastrophic crime waves committed against the USA over many decades, the 1% perps would all be apprehended immediately and… … …

HUNG
LIVE
ON THE INTERNET.

Now, what happens next in this highly organized international communist conspiracy to overthrow President Trump and take over the United States?