THE MOST PERILOUS MOMENT OF THE THIRD MILLENNIUM—Why?!

Now we really know why POTUS
Imposter Joe Biden was criminally
installed in the White House! 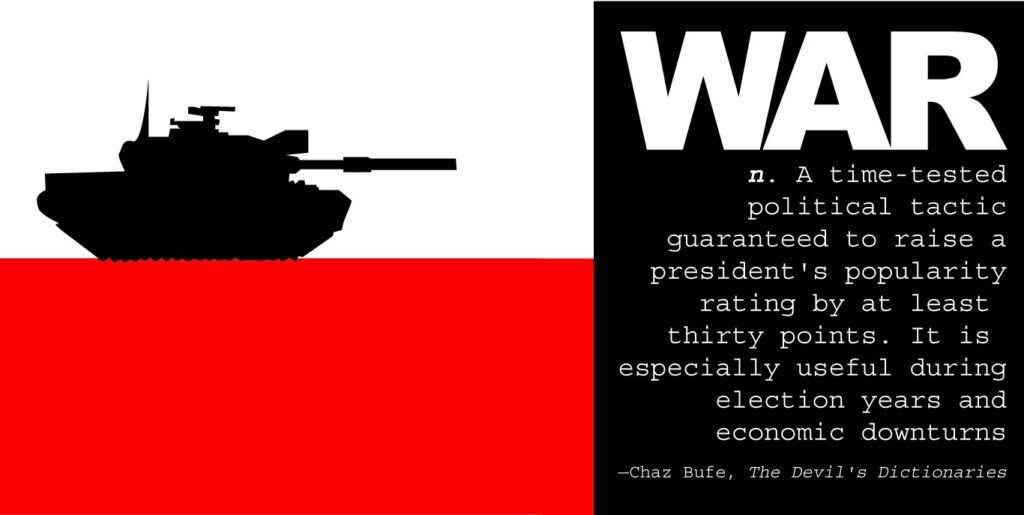 Let’s state the obvious: No politician — from either party — ever occupies the Oval Office unless they were put there by the forever warmongering banksters.

The patently criminal inauguration of Joe Biden on January 20, 2021 is a perfect example of this stark and undeniable reality.

But why? Really? Why Biden?

There are obviously many significant reasons why the old and senile, demented and drug-addled Biden was specifically selected on Election Day 2020.  All of them hinge on his life-long career marked by naked corruption and criminality, brazen malfeasance and misconduct, as well as sheer depravity and immorality.

All of these blackmailable qualities made Biden a perfect pawn of the warmongering banksters and ideal puppet for his NWO globalist masters.  So did his proven career-long crime spree of pedophilia in public places as well as at home. See: Biden Incest & Pedophilia Confirmed: Ashley Biden’s Diary Legitimate

In point of fact, Biden was quite evidently chosen years ago for a particular task above all others.  And, his extremely fraught relationship with the Ukraine indicates the nature of that highest-priority mission. See: VP Biden Commits High Crimes Via $1 Billion Bribery Coercion Scheme Against Ukraine Government

Once Biden’s handlers conned him into publicly admitting those high crimes of “governmental bribery/coercion” during prime time, the Zionist warmongers knew they had him exactly where they wanted him—between a rock and a hard place with only one way out—WAR!!!

A retrospective analysis of the major wars that took place during the 20th century points directly to the following irrefutable historical facts.

Democrat presidents were deliberately selected by the New World Order cabal to start or declare American involvement in, and then aggressively prosecute, the World Wars and other major regional wars that have occurred since World War I.

Even when the United States did not ostensibly start any of those World Wars or major armed conflicts, it was always Democrat administrations which stealthily set up the global geopolitical chessboard for war-triggering hostilities to break out.  As follows:

*After JFK realized he was deceived into prosecuting the Vietnam War he quickly attempted to terminate that ugly corporate war but with great consequence.

Whereas Obama was intentionally used by his globalist masters to start the ongoing Ukraine War in Donbas, Biden is being used to trigger the hot phase of a full-scale Russo-Ukrainian War.  Once that armed conflict commences, a full-blown World War III is but a single nuclear weapon deployment away. 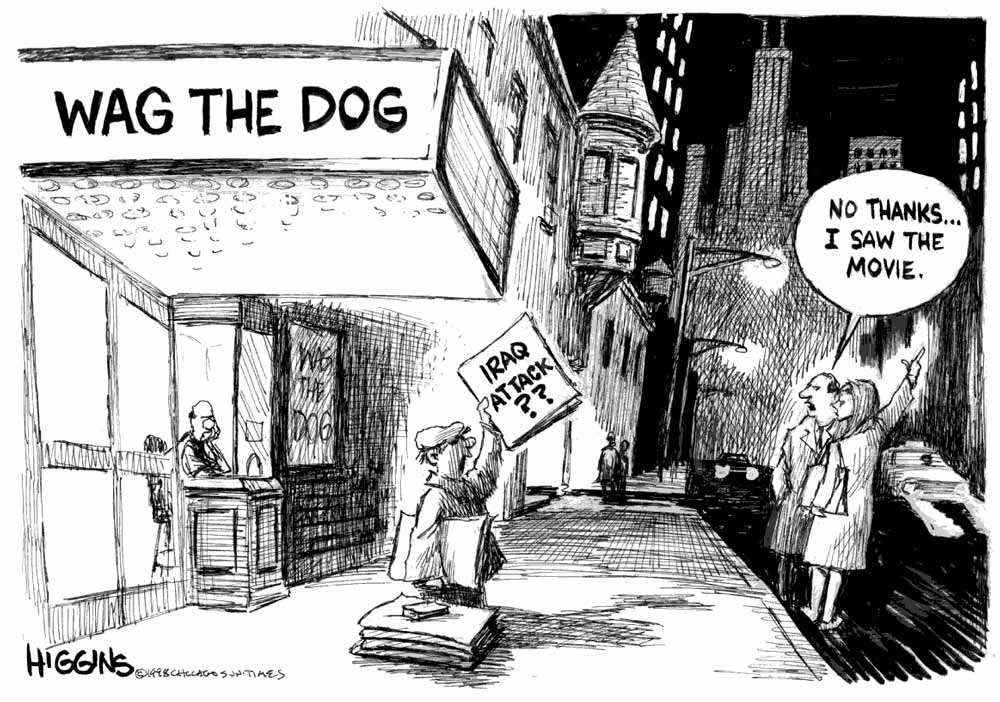 “Wag the Dog was released one month before the outbreak of the Lewinsky scandal and the subsequent bombing of the Al-Shifa pharmaceutical factory in Sudan by the Clinton administration in August 1998, which prompted the media to draw comparisons between the film and reality. The comparison was also made in December 1998 when the administration initiated a bombing campaign of Iraq during Clinton’s impeachment trial over the Lewinsky scandal.” – Wikipedia

Never in U.S history has any POTUS ever needed a “wag the dog” moment as much as Joe Biden does in 2022—a pivotal midterm election year.

Of course, his precarious presidential predicament was fastidiously engineered by his hidden masters and ever-present handlers for this crucial phase of the New World Order implementation plan.  What follows is an abridged list of political disasters and economic catastrophes engineered by the globalists during Biden’s calamitous first year in the Oval Office.

Here Biden is in 2022 with the worst REAL job approval ratings in POTUS history.

His highly embarrassing VP, Kamala Harris, is also experiencing the worst ever ratings; and they ought to be even lower if they were accurate.

The worst inflation rate ever in US history is going up, not down…and with no end in sight.

All of Biden’s dangerous and unconstitutional vaccine mandates are getting torpedoed one after another by federal judges and governors alike.

Corporate America is quietly rebelling against Biden’s EOs, unlawful mandates and other illegal directives that are destroying their businesses and killing the economy.

Supply chain disruptions are only increasing as is the unparalleled port congestion.  Empty store shelves are slowly appearing everywhere.

The open borders letting in millions of illegal aliens, convicted criminals, drug dealers and drug lords, terrorists, anarchists, bolsheviks, mercenaries, spies and other foreign enemies was intentionally made even more porous by the Biden administration.

Biden’s Covid response has been utterly disastrous by all accounts.  His “Dark Winter” prognostication was issued as both an unprecedented POTUS threat and self-fulfilling prophecy. (Of course, his NWO masters and the warmongering banksters can make any prediction come true, and right on time.)

After outright stealing the 2020 election, at least half the body politic absolutely detests this POTUS imposter for transparently destroying the American Republic when he’s not even legitimate.

By pushing the communist-driven voting rights legislation so hard so that the Democrats never lose another election is another deceit that’s infuriating the electorate.

So is the Republic-demolishing Build Back Better Act which promises to irreparably bankrupt the USA after it  morphs the nation into a marxist USSA where “A” stand for Amerika.

By the way, the forgoing list of Biden-made calamities and cataclysms only represents the tip of the massive iceberg toward which USS Biden is now heading toward.

Now we know why POTUS Imposter Joe Biden is frantically WAGGING THE DOG in the Ukraine … just as Bill Clinton did in Iraq during his impeachment trial. The Zionist Neocon cabal has stated over several decades that Russia must be completely subjugated if the New World Order agenda is to be successfully fulfilled.  Their long-planned One World Government, headquartered in Jerusalem, can only become a reality with a totally subservient Russian Federation.

Of course, the Zionists have had their eyes on the Russian landmass and vast treasure trove of natural resources since the very beginning of their war-making Great Game, which is really a perpetual war against Russia until the country is conquered, resources stolen, people enslaved and government controlled FOR A SECOND TIME. See: ‘Russia should be partitioned by Western powers and divided up into around a dozen separate states’ — Ukraine’s Former Foreign Minister

The essential NWO piece on the current global geopolitical chessboard is the one that prevents Russia and Germany from ever forming a political and economic alliance which would realistically threaten the Zio-Anglo-American Axis (ZAAA).  The rabid Neocon Zionists strategically positioned throughout the Western power structure will not permit this.  Therefore, they are staging a highly disruptive world war — AGAIN — to pit Russia against Germany to terminate all relationships both existing and planned, especially economic and financial collaborations such as the Nord Stream 2 gas pipeline.

Just what is this incorrigible cabal of criminally insane psychopaths willing to do to thwart an economic union between Germany and Russia?  And, to establish their totalitarian One World Government?  And, to institute a Covid-driven Global Biosecurity Superstate modeled after the medical tyranny presently running the apartheid state of Israel?

SOTN Editor’s Note: Just how serious is “THE MOST PERILOUS MOMENT OF THE THIRD MILLENNIUM“?  The NWO globalist cabal desperately needs a distraction due to their rapidly collapsing Covid hoax.  There’s no better distraction than war.  And, because the whole of humanity was roped into the fake Plandemic, the Covid crime perpetrators know they need a World War III to sufficiently divert everyone’s attention. See: Fearful Power Elite + Failed Covid Plandemic = Distracting World War 3