OPERATION ELLIOTT: Much more deadly and devastating than they’re telling US 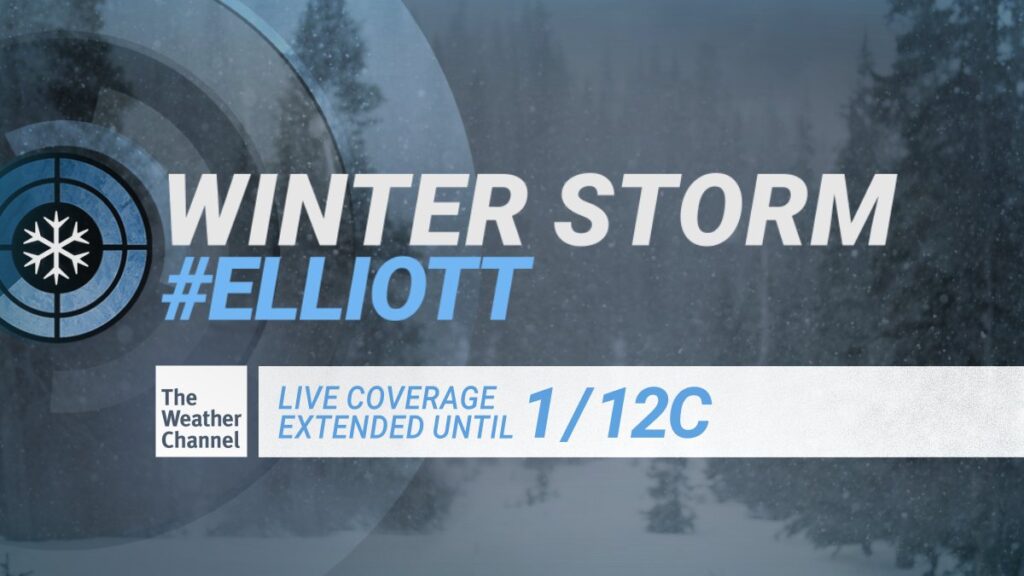 This late December 2022 North American winter
superstorm is a highly organized and purposeful geoterrorist operation designed to mass murder
as many Americans as feasible, as well as to create
as much travel chaos, holiday misery and national
hardship as possible.  In other words, this ongoing weather war being waged against both the United
States and Canada is designed to, in furtive ways,
greatly advance the Great Reset.

Don’t be deceived: THOUSANDS UPON THOUSANDS OF UNAVOIDABLY   HOMELESS AND INADEQUATELY HOUSED, ELDERLY AND INFIRM,
VEHICLE-TRAPPED AND TRULY FOOLISH, COVID-VACCINATED AND
COVID-19 INFECTED HAVE ALREADY PERISHED FROM THE UNTOLD
RAVAGES OF WINTER STORM ELLIOTT.

In spite of this reality, the CIA’s Mockingbird Media is falsely reported that only “19” deaths have been linked to this manmade weather cataclysm.

Oh, really, a ginormous “bomb cyclone” triggered by a humongous polar vortex profoundly disrupts life for nearly 25o million people and only “19” are dead.  A once-in-a-generation “deep freeze” paralyzes life across vast swaths of North America but millions of the most vulnerable are still somehow alive and kicking.

Do you see how they do this during and after each and every major geoengineered weather disaster that aimed at the USA?

The “19 deaths” quoted above will slowly inch upwards over the coming days regardless of the fact that the accurate mortality rate explodes by the hour.  The government is well aware of the true statistics in this respect but will always mislead the general public.  The county coroners across the USA see virtually every dead body directly caused by a devastating event such as Winter Storm Elliott.

KEY POINTS: The uninitiated are surely unaware that every single major geoengineered weather attack produces thousands of unreported fatalities and injuries.  There are several reason for this predictable stark reality.  Perhaps the most important is that the higher the number of actual deaths, the more it is viewed as a massive failure of government at all levels and especially the criminally negligent U.S. Federal Government.  Secondly, the less serious the weather event, the less obligated the US government is to formally declare an official federal emergency that would automatically qualify states, counties, cities and citizens for LOTS of emergency funding.  Thirdly, the greater the mass death and injury caused by as well as sheer size and magnitude of the weather catastrophe, the more reprehensible it is in the eyes of the US taxpayer to repeatedly send tens of billions of dollars to Ukraine’s war crime-committing Nazi regime while Americans freeze to death, have no heat, water or electricity, etc.  Then there is the malicious intent on the part of the NWO geoterrorists whose explicit goal it is to mass murder as many “useless eaters” as possible, in which case they don’t want anyone to know just how extremely dangerous this ongoing superstorm really is.

Many folks remain willfully ignorant of the weather wars and geoterrorism taking place around them and across the country on a weekly basis.  In spite of the sky above them showing nearly a score of crisscrossing chemtrails on any given day when it was forecasted as clear and sunny all day long, they refuse to face the raw truth about the extremely perilous weather modification and climate engineering occurring nationwide–24/7.

But how do the NWO geoengineers really do it?  How are the able to create these immense weather calamities?! A satellite view of Winter Storm Elliott on Dec. 23, 2022.
NOAA/NESDIS/STAR/GOES-EAST

As for why the US citizenry was targeted by Elliott during this particular holiday season, the exposé excerpt below reveals the various hidden Deep State agendas, NWO objectives, globalist goals and WEF ambitions.

I.  To greatly weaken and/or collapse state, regional and national energy grids from the North Midwest to Deep South and from the East Coast to the West Coast

II.  To further sabotage and/or collapse the food supply by wiping out vast swaths of agricultural acreage especially where winter crops are vulnerable.

III.  To mass murder some of the millions of homeless and inadequately housed individuals across those regions of the country undergoing an unparalleled deep freeze (See “wind chill” map above)

IV.  To distract the American people from the ongoing grand thefts from the U.S. Treasury being conducted before the 118th United States Congress meets on January 3, 2023

V.  To  divert the attention of the U.S. citizenry from the countless war crimes and crimes against humanity committed by the Biden administration, particularly those perpetrated in Ukraine, Syria, Afghanistan and Somalia.

VII.  To manufacture a sufficient level of chaos, confusion and conflict nationwide so that the Democrat/RINO Uniparty can carry out their traitorous plan to conspicuously overthrow the U.S. Federal Government via a bolshevik revolution

VIII.  To forever cancel the American Republic and bankrupt the US Corporation before installing a totalitarian government in Washington, D.C. which will employ the very worst aspects of both fascism and communism

IX.  To, as much as possible, get all Christmas celebrants and New Year merrymakers talking about the inclement weather instead of the naked treason and treachery POTUS Imposter Joe Biden and his scandalous son Hunter are notorious for.

X.   To create the optimal environmental conditions, both inside and outside, for as many Americans as possible to get sick, especially with COVID-19 so the Plandemic perpetrators can aggressively hawk the lethal Covid ‘vaccines’ throughout 2023

XI.  To wreck and ruin the year-end holiday season after an exceptionally ruinous year, particularly when so many folks really needed time off to heal, or a vacation from the work grind, or a psychic respite from so many political and social setbacks as well as financial and economic misfortunes
(Source: THE GEOENGINEERED WINTER BOMB CYCLONE &
DEEP FREEZE OF 2022—Why & Who?

XII.  To continue to kill Christmas, the religious holiday, and replace it with the adoration of the globalist god of Mammon via the godless terrorists who relentlessly work to advance the satanic NWO agenda of cultural marxism

Certainly, The Powers That Be will milk this national cataclysm for all that they can … and they will likely follow it up with a similar overwhelming weather event or two or three while the winter is still young.

The Weather Warfare Watchers
State of the Nation
December 25, 2022

SOTN Editor’s Note: What’s quite predictable about the reaction to excellent exposés like this one is how folks reflexively dismiss the possibility that thousands have already died as a direct result of OPERATION ELLIOTT.   It’s as though they SUDDENLY trust the CIA’s Mockingbird Media to tell the truth about the number of deaths in the wake of this U.S. military-conducted geoterrorist operation.  Just like the same genocidal perpetrators told us the truth about all of the Covid ‘vaccine’-induced deaths and injuries!  Never forget: the ‘best’ genocide the highly concealed perps can carry out is the one that no one knows even took place. Welcome to OPERATION ELLIOTT, an immense false-flag weather attack under cover of Mother Nature so no one observes the deliberate mass murder of who knows how many aged and insufficiently domiciled U.S. citizens. 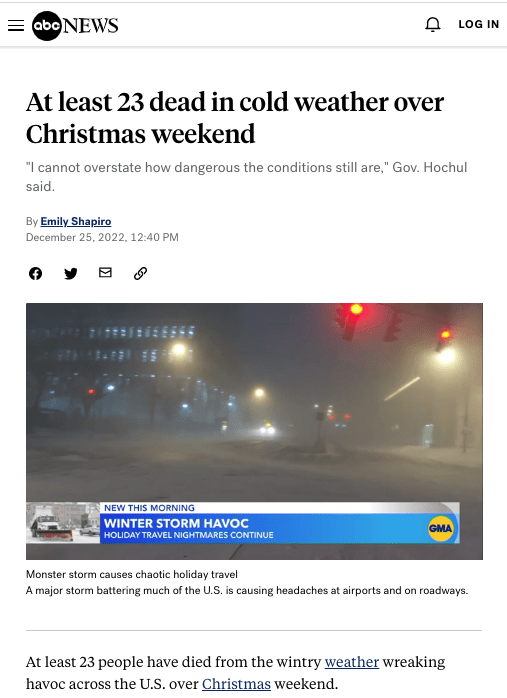 We’re supposed to believe that only “37” have died in the worst Christmas snowstorm and extended deep freeze on record. 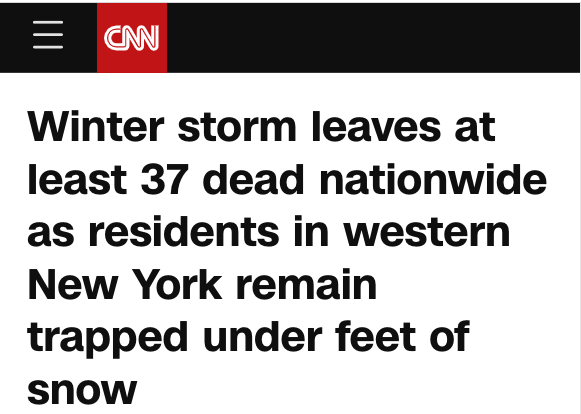 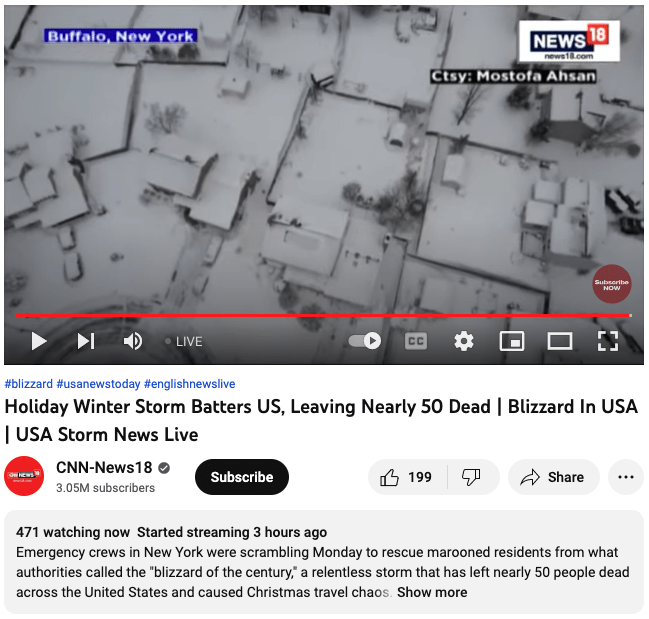 The following New York State report represents only a tip of the iceberg where it concerns the increasing number deaths due to Superstorm Elliott. 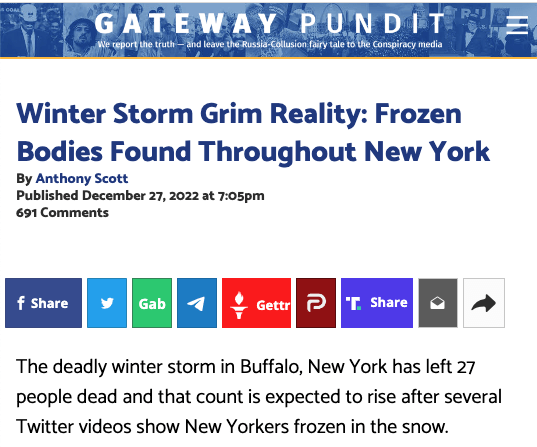