THE COVID HOLOCAUST: Much Worse Than Anyone Knows 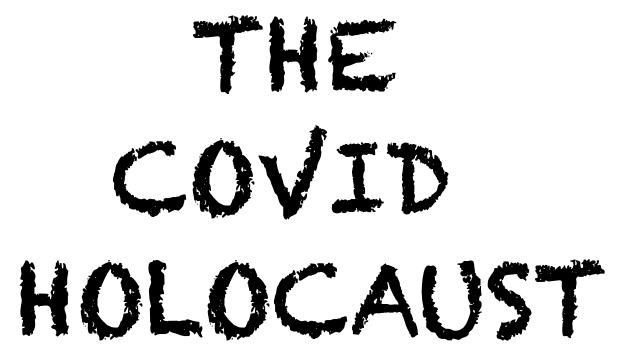 Even today very few folks are aware of the well-hidden yet overwhelmingly consequential back story of the long-planned Covid Plandemic.

In point of fact, both the launch of OPERATION COVID-19 (i.e. the biowar against humanity that saw the release of the various COVID-19 bioweapons) and the subsequent implementation of the Covid Super Vaccination Agenda represent a one-two knockout punch strategy against the predominantly white Christian countries which comprise the First World nations.

To some investigators the raw truth conveyed by the foregoing statement may already be quite obvious.  However, what may not be so apparent is that the entire Covid Plandemic is being carried out by the sinister Khazarian perpetrators primarily as a genocidal holocaust.

How convenient: “the Ashkenazi bloodline is
practically immune to the spike protein”

In other words, it is with highly purposeful design that the Khazarian Cabal is literally conducting a worldwide holocaust specifically targeting white Christian men and women.  Of course, countless non-whites and non-Christians are also being killed and slowly dying by the millions as collateral damage.  In this way, the Khazarian perps can claim plausible deniability as well as advance their global depopulation scheme at the same time.

KEY POINT: As a matter of historical fact, it was the Khazarian Cabal which was directly responsible for rolling out the cataclysmic Kalergi Plan (aka the Coudenhove-Kalergi Conspiracy) back in 1925.  That nefarious scheme was also designed to wipe out the white race WHO HAVE ALWAYS POSED THE GREATEST THREAT to Khazarian supremacy and their complete domination of the planet Earth.[1] 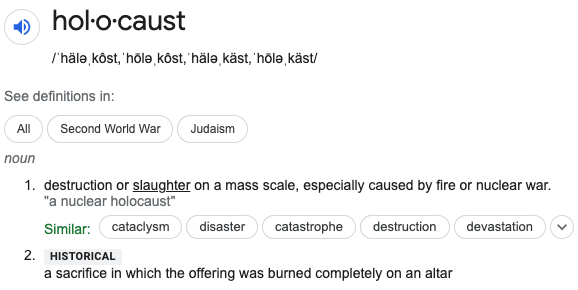 There’s only one genocidal tribe on Earth that has been perennially obsessed with a holocaust and especially with ‘The Holocaust’.  That’s because the same Khazarian Cabal was directly responsible for carrying out what was really a Holohoax during World War II.  Truly, the “Holocaust Industry” was always about one thing: scaring all of European Jewry away from the Continent and over to the stolen lands of Palestine which is now known as the modern State of Israel.

For the record, not only did 6,000,000 Jews positively not die in those concentration camps which were actually set up as slave labor camps during World War II, it’s quite unlikely that not even 60,000 Jews died.  How so?  Those Jewish inmates, as were all concentration camp inmates, were desperately needed to work for the German war effort.  Most significantly, the Jewish inmates were urgently required to populate Palestine after WW2 in order for the Zionist plotters to justify stealing all Palestinian land.  For whoever has the most occupiers on any given territory gets to steal the lands according to the Khazarian-controlled UN.

Those Jews who did pass away in the camps died primarily from starvation and advanced malnutrition, old age and multiple co-morbidities typhus and typhoid, dysentery and durchfall, tuberculosis and meningitis, malaria and scabies, etc.  And all of the high-integrity scientific, anecdotal and circumstantial evidence has since proven that there simply was no organized extermination program; it was all faked by the entire cadre of Zionist leaders over the intervening decades.  In other words, the top Khazarian fake Jews locked up and made life miserable for their Jewish brethren, but only to get them into the stewpot called Israel post-haste.

KEY POINT: The word “Nazi” originally referred to the traitorous AshkeNAZI Jews (aka the Khazarian Mafia) who sold out the truly religious Jews of their own Ashkenazi/Khazarian bloodline.

The year 2020 marked a critical moment in the roll-out of the New World Order agenda for a number of time-sensitive reasons.  In order for the Khazarian globalists to establish their long-planned One World Government with Jerusalem as its capital, the world community of nations has to be adequately shocked and awed into accepting a global dictatorship.  The form of that totalitarian government would initially take the shape of a full-blown medical tyranny.

The Khazarian-created United Nations, and in particular the unelected and stealthily installed leadership of the World Health Organization (WHO), would be used to administer that global medical tyranny.  What nations everywhere have already experienced, to varying degrees, is a flagrant attempt to introduce a highly autocratic Covid compliance regime worldwide run under the rubric of the unaccountable WHO.

WHO’s secret meetings and how the 2005 International Health Regulations amendments are the backdoor to total global control and the establishment
of a planetary digital surveillance system. (Video)

Once the frequently floated Covid vaxport or other type of vaccine passport is instituted worldwide, which illicitly grants power to the WHO to supersede the authority of all national governments, the precedent will be set to expand the oppressive Covid regime into a much broader global governance entity.  Of course, the Khazarian Cabal‘s main goal is to expeditiously launch and standardize a CBDC throughout the entire planetary civilization which the One World Government will strictly enforce via a Chinese-style social credit system.

Back to THE COVID HOLOCAUST.

It ought to be self-evident by now regarding the ongoing Covid human sacrifice that such a complex criminal conspiracy had to be extremely well-planned and efficiently executed … just like the fake Final Solution was by Khazarian-directed Nazi Germany.  It should also be apparent that there is only one all-powerful and all-pervasive international crime syndicate which could pull off such a convoluted Covid caper, as well as effectively cover it up for the foreseeable future.

The capstone of the Khazarian’s multi-millennial conspiratorial plot to first neutralize, and then eliminate altogether, the white Christian peoples is THE COVID HOLOCAUST.  Irrespective of how exceedingly reckless and brazen such a global mass sacrifice truly is, as well as how extremely difficult it is to keep such a massive crime wave covered up worldwide, their resolve to complete THE COVID HOLOCAUST is calamitously implacable.

To wit, the Khazarian Cabal knew full well from the very start of the Covid sacrificial mass murder, racial genocide and global depopulation project that their god — SATAN — had to first be properly propitiated if their foolhardy plan for a One World Government was to be successful.  After all, that’s what profane sacrifices are really for—invoking the favor, eliciting the aid and drawing down the power of a chosen ‘deity’ to accomplish one’s self-serving and malevolent goals.  Toward that end, the Khazarians, who own and operate the Synagogue of Satan, know just how to do that as they have been doing with absolute impunity over the millennia.

The Khazarian Cabal is also well aware that nothing works like their time-tested Ordo ab Chao strategy.  Since Satan is all about death and disease, destruction and devastation, desolation and defoliation, depredation and desecration, degradation and disintegration, the Khazarians were quite cognizant of the necessity for THE COVID HOLOCAUST to be an immense sacrifice for two reasons.  The first was to provide sufficient cover for their world takeover endeavor to proceed undetected by the diseased and death-stricken masses.  The second more important reason was to conduct a large enough collective human sacrifice that would both appease and satisfy the only idol that resides in their infamous Synagogue of Satan…for only an enormous human holocaust would make that child-devouring god amply gratified. 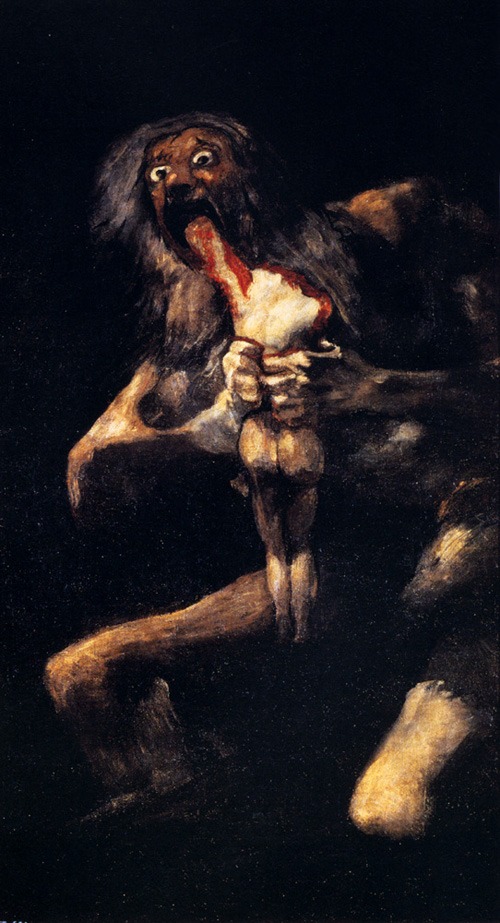 While the painting above does depict Saturn devouring his son, it’s important to note that “Satan” is the biblical rendition of the name “Saturn”.  The Hebrew astrologers, oracles and scribes were well aware that the planet Saturn was responsible for delivering all negative and unpleasant karma in the world of men; hence, the planet took on the visage and aura of mankind’s greatest enemy—Satan…unless you’re a Khazarian worshipper, of course.

However, whenever the marriage of such extreme arrogance and ignorance takes place within any tribe of inveterate biowar-makers and bioterrorists, bad mistakes are inevitably made.  Falsely thinking that, once Satan was satisfactorily ingratiated by THE COVID HOLOCAUST, their plans for total world domination would proceed without being thwarted by pesky populaces has proven to be utterly disastrous for them and their many mercenary minions.

THE COVID HOLOCAUST will eventually be distinguished as the largest planned genocide and mass human sacrifice in the world history dwarfing every other culling perpetrated by the Khazarian Cabal.

But what makes this highly organized extermination plot particularly perilous is that most of living vaccinated victims cannot even be told of their terrible fate.  With each passing year, as they get more and more debilitated from their multiple vaccine injuries, the psychological harm caused from telling them about their true condition may be worse than the physical afflictions.

KEY POINT: It ought to be intuitively obvious to every Covid conspiracy realist that there’s only one well-concealed global power structure capable of carrying out both the OPERATION COVID-19 biowar launched against humanity in 2019, as well as the genocidal Covid Super Vaccination Agenda first implemented in 2020. In point of fact, there is only one criminal clan that possesses such malevolent power, pervasive influence and overwhelming force that every country on Earth could be easily and quickly compelled/coerced to mass murder its own citizens. For only the Khazarian Cabal could so seamlessly and efficiently perpetrate such a worldwide holocaust, successfully cover it up, and seemingly get away with it. And it is these three primary pillars of their well-established global crime syndicate which have, thus far, ensured the ruthless killing efficiency of this long-planned Covid conspiratorial plot: (i) Khazarian Mafia, (ii) Ashkenazi Banksters and (iii) Zionist Warmongers.
(Source: THE VERY TOP OF THE GLOBAL COVID CRIMINAL CONSPIRACY)

Which means that only the surreptitiously targeted Covid holocaust victims themselves can bring this monstrous human sacrifice to an end.

For example, were every Covid ‘vaccine’ victim to take back their power, stand in their own truth and speak that raw truth to power, everything would change in a day and a night.  By bravely standing up for righteousness, they would prevent other innocent victims from being led to the slaughter.  In effect, THE COVID HOLOCAUST would be halted—FOREVER!

Not only would the victims’ collective voices immediately terminate THE COVID HOLOCAUST, their courageous and thunderous response would serve to ultimately bring down the Khazarian Cabal‘s entire BEAST System.

Submitted by Revisionist Historians for World Peace
State of the Nation
January 10, 2023

SOTN Editor’s Note: Another way to fully grasp the true enormity and gravity of THE COVID HOLOCAUST is to correctly understand what really happened during the entire 20th century and up to this very day.  An accurate distillation of all the history books in every country on Earth would state the following truthful conclusion: Virtually every world war and regional war, civil war and color revolution, pandemic and epidemic, terrorist attack and act of bioterrorism, economic collapse and financial breakdown, weather war and geoterrorist event, etc. was carried out by the Khazarian Cabal with the explicit purpose of forming their planned One World Government.  Establishing the Modern State of Israel was the central column of the Khazarian’s utterly satanic New World Order agenda.  Some researchers have even posited that over 70,000,000 people were deliberately killed (read: sacrificed) from 1900 through the end of World War II only so Israel would be universally recognized as a legitimate Jewish state and Jerusalem accepted as its true capital.  An abridged list of Khazarian-created cataclysms designed to advance their NWO agenda, right up to the present day, can be found here: The World Wars And Every Cataclysmic Event In Between Were All Carried Out By THE TRIAD

[1] KALERGI PLAN: What everyone needs to know