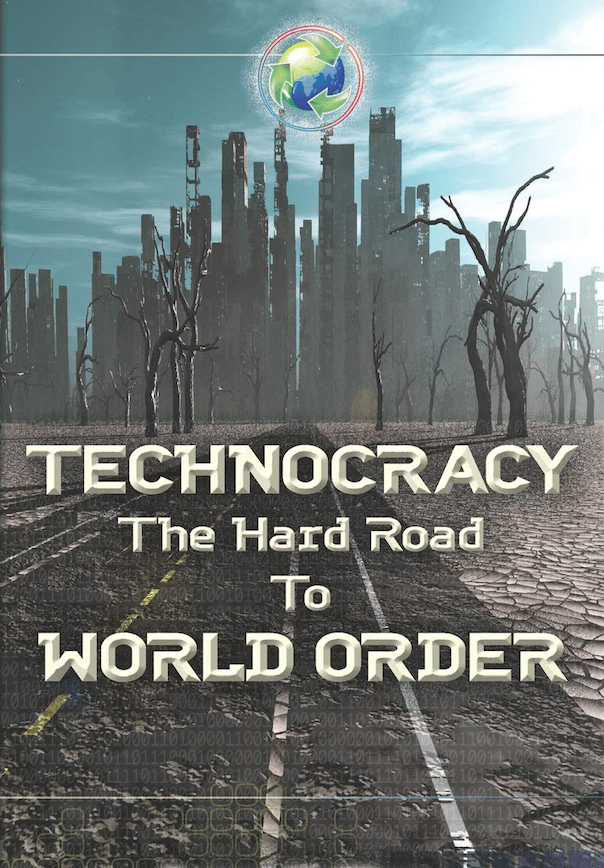 Everyone knows — deep in their bones — that there’s something very wrong with COVID-19.  And, that there is something very BIG going on in the background of this pre-planned coronavirus pandemic and transparently staged panic.

People everywhere now know that every major false-flag, mass casualty event — like OPERATION COVID-19 — is carried out for multiple reasons, but that overwhelming DISTRACTION is always a central NWO goal and desired outcome by TPTB.

As a matter of historical fact, the current race of humanity has never experienced a worldwide terrorist operation and global psyop as thoroughly distracting and mesmerizing and frightening as OPERATION COVID-19.  The following exposé presents a convincing case that proves this bioengineered pandemic was pre-planned and the  subsequent psyop is being staged.

There are extremely significant reasons why the New World Order globalist cabal saved the biggest and baddest series of bioterrorist black ops for 2020.

Truly, there is something much, MUCH bigger going on under the radar which deserves everyone’s attention—NOW!  That “something” is known as Technological Singularity.

The most urgent understanding to have regarding Technological Singularity is that once that decisive point of no return is reached, it’s game over for the entire planetary civilization.  Nevertheless, the Tyrannical Technocracy is hellbent on perfecting the most advanced generation of Autonomous Superintelligence deemed indispensable to the management of their planned One World Government.

It could even be argued that this entire worldwide COVID-19 drama has been painstakingly produced and directed as a HUGE distraction while The Powers That Be put the finishing touches on their Tyrannical Technocracy run by AI and overseen by AS (Autonomous Superintelligence).

However, there’s a monumental problem with the extraordinary determination to perfect Autonomous Superintelligence as the following revelation explains:

“When scientific knowledge and applied technology
reach a critical level of advancement, without being
informed by spiritual truths and guided by moral
authority, this planetary civilization will cease to
exist as it is. Once certain thresholds are crossed
into forbidden areas of perilous scientific pursuit
and dangerous technological development, the
destiny of the human race will be abruptly and
forever altered.”
~ Cosmic Convergence Research Group
(Source: HUGE Changes Coming To Planet Earth)

Nonetheless, in their extreme desire to exert complete command and control over humankind, The Powers That Be are resolved to put AS in charge of the Tyrannical Technocracy.  They really believe such a perilous move will somehow liberate them from the travails of keeping societies everywhere in check.

It’s true: the more the Tyrannical Technocracy is directed by AS decision-making, the closer the whole world comes to the ill-fated moment of Technological Singularity. For only an entity meticulously programmed with Autonomous Superintelligence will be able to competently oversee the manifesting Global Control Matrix —the monitoring and enforcement arm of the now covert One World Government.  Highly developed autonomous AI platforms already serve as the backbone of the present supranational spying and surveillance regime.

KEY POINTS: It’s of paramount importance to correctly comprehend both the interrelationships and interpenetrating aspects between the aforementioned entities and institutions, mechanisms and processes.

• The One World Government will only function effectively when the Global Control Matrix has been established and is fully functioning.  Both of these entities have been secretly evolving since the Federal Reserve Act of 1913.

• The Global Control Matrix can only operate after 5G is sufficiently activated.  The equally necessary Internet of Things will only manifest after the 5G roll-out is completed worldwide.

• Most importantly, the power and influence of the Tyrannical Technocracy, which totally controls the One World Government, steadily increases with every upgrade in Autonomous Superintelligence.

• Therefore, Autonomous Superintelligence is the fulcrum around which the Tyrannical Technocracy will revolve as the skeleton of the New World Order is gradually fleshed out.

• As the ever-accelerating self-advancement of Autonomous Superintelligence swiftly proceeds, Technological Singularity is attained with apocalyptic consequences, unless a powerful countervailing force terminates the current trajectory.

The most critical component of the rapidly expanding Global Control Matrix is 5G.  For only with a fully activated 5G power grid will the prospective Internet of Things operate at peak performance in the future.  This is exactly why OPERATION COVID-19 was launched during this particular period of time in early 2020. Listen to: SETTING AMERICA UP FOR PASSOVER RITUAL (Video)

Launching OPERATION COVID-19 was the only way the power elite could ensure the necessary cover, as well as quality time and space needed for the surreptitious military deployment of 5G.

Because the illicit 5G roll-out nationwide is a pivotal piece of the Tyrannical Technocracy, the coronavirus bioweapon was forcefully unleashed in the USA (even if all the infection rates and death counts are all made up).  Likewise, those other nations that represent essential cogs in the 5G juggernaut have also been bioterrorized by COVID-19. (See the very telling map below.) 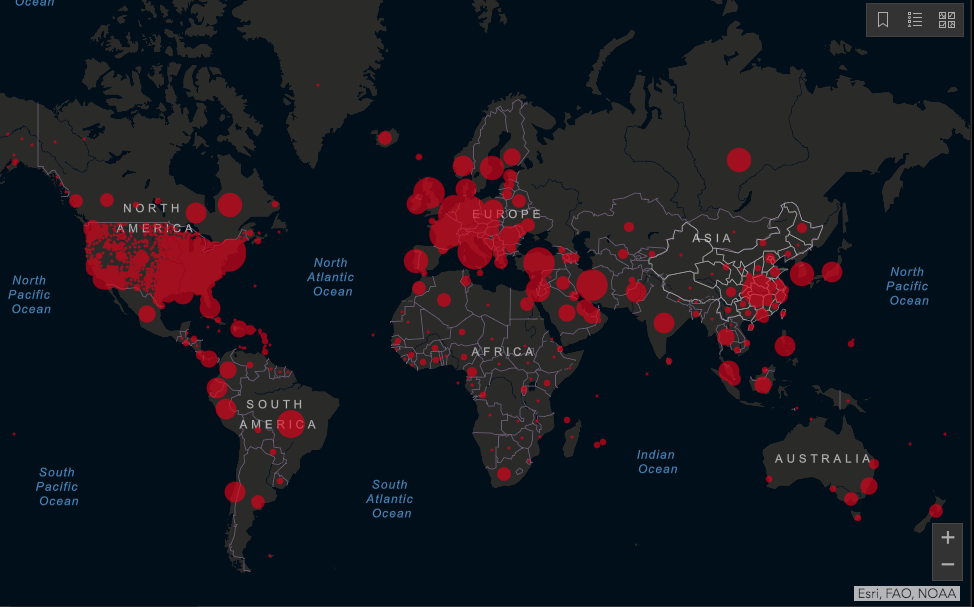 COVID-19 Global Cases by the Center for Systems Science and Engineering (CSSE) at Johns Hopkins University (JHU) as of April 9, 2020

The following extended essay presents the most critical elements of this exceedingly desperate and reckless attempt to foist 5G on the world community of nations under cover of COVID-19.

Welcome to the COVID-19 AI Simulation! Brought to you by your AI ‘friends’ at DARPA.

Now that OPERATION COVID-19 been exposed as a ruthless AI-coordinated crime spree against humanity, it will likely galvanize a critical mass of individuals to push back hard especially against the utterly disastrous lockdown plan.

Clearly, the power elite calculated wrong and grossly underestimated the reaction of the terribly victimized populations.  When any targeted populace realizes the radioactive truth about OPERATION COVID-19, folks will light their torches and pick up their pitchforks.

Quite brazenly, while the various 5G activations caused many of the coronavirus clusters to explode, the perpetrators used the ensuing chaos and lockdowns to roll out 5G even more intensively.  What else could be expected of an AI-driven plan to shut down the planet where the ruling AS entity requires 5G-saturation to maintain its ascendancy?

Not only is this depopulation scheme and control grab destined to fail miserably, the AI-directed lockdown will also trigger an angry reaction in those countries where the economies have been devastated.  This was the fatal mistake that even the best AI simulations failed to anticipate.

However, what this AS-inspired blunder really exposed is the extent to which an Autonomous Superintelligent entity will go in order to advance its own narrow agenda at the expense of everything else.  In other words, AS needs 5G and the IoT in place to completely dominate the realm.  Look at what the AS tyrant has done to achieve that unattainable and brutal objective.

This discussion in no way relieves those foolish individuals (e.g. Bill Gates) who set this global catastrophe in motion in the first place. The criminally-insane psychopaths who populate the highest levels of the Tyrannical Technocracy own this entire genocidal takeover scheme.  After all, every Frankenstein has its creator—Dr. Frankenstein.

KEY POINT: Autonomous Superintelligence is the most technologically advanced and highest level functioning AI on the planet today.  Think of Autonomous Superintelligence as AI on super-steroids in terms of computing power, intellectual ability, memory capacity, critical thinking skills and trouble-shooting capability.  AS actually gets smarter every minute of every day because it progressively increases its accumulated artificial intelligence and expands its body of knowledge with each successive experience.  It doesn’t forget anything—EVER; whatever goes into its memory banks can be retrieved as needed.  When the AS genie gets out of the bottle, there’s simply no putting it back in.  On the contrary, an Autonomous Superintelligence entity will see to it that humanity is put into the bottle (also known as COVID-19).
(Source: OPERATION COVID-19 An AI-Simulated Global Live Exercise Initiated via Multiple Acts of Bioterrorism on 3 Continents

It behooves every truth seeker to ferret out the raw truth before this draconian lockdown becomes a permanent fact of life.  And, to do so with all deliberate speed while we still have our liberties and certain capabilities such as access to the Internet.

Similarly, the Truth Movement must eventually respond to this unparalleled assault against people and planet alike.  There does appear to be a quickly closing window of opportunity to act which must be negotiated expeditiously lest We the People lose it forever.

In the meantime, every person on Earth ought to be aware of the content in the following two exposés.  Each one ought to be circulated far and wide before many trusting and/or unaware folks fall into 2 different traps.

Here’s the first trap to avoid: Is the COVID-19 diagnostic test giving people the coronavirus or vaccinating them without their knowledge or both?

And, here’s the second trap: Are the medical authorities deliberately moving elderly COVID-19 patients into hospitals to kill them with ventilators and/or other dangerous protocols?!

Bottom Line: OPERATION COVID-19 is a highly misguided scheme to greatly accelerate the military deployment of 5G and build-out of the Internet of Things worldwide.  There are various interlocking criminal conspiracies, which have been conducted alongside this global bioterrorist operation, that are detailed in this exposé: QUATERNARY WEAPON SYSTEM Activated Before Each Coronavirus Cluster Explosion.