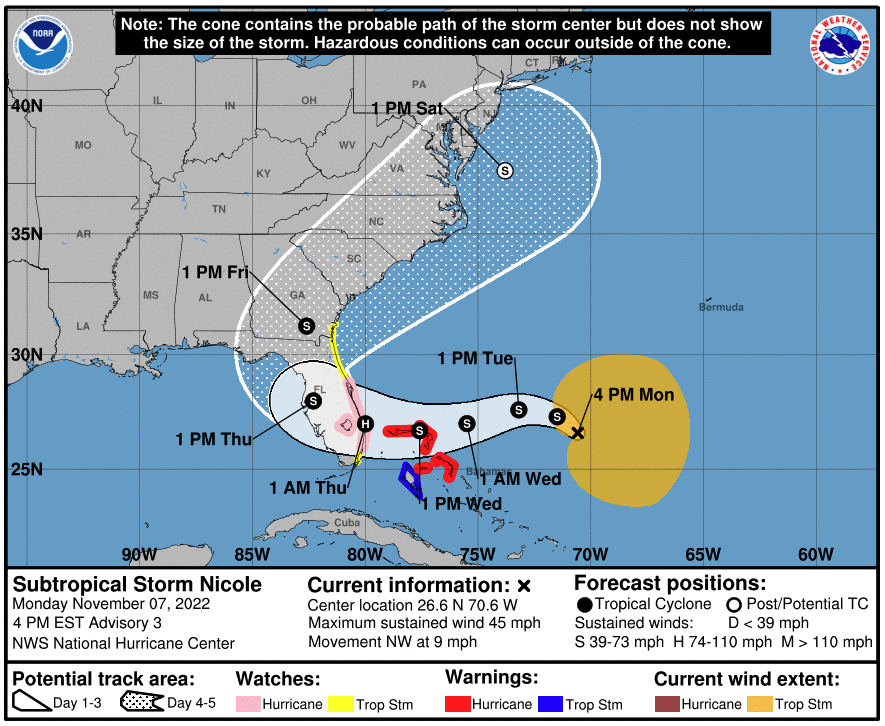 We are respectfully writing this urgent letter about the most recent geoengineered Subtropical Storm Nicole now being deliberately steered toward the Florida Peninsula.

As you know, there has been only one hurricane (which was also a geoengineered superstorm) to make landfall on the U.S. coastline during the current hurricane season.  That was the tremendously damaging Hurricane Ian.

Now we Floridians are guardedly watching the painstaking development of a second major hurricane off the Atlantic Coast.

Gov. DeSantis, what are the odds that the most destructive hurricane ever to strike Florida occurred just weeks prior to Election Day this year?  Also, what are the chances of a second mega-storm slamming the Florida coast just days after the most consequential midterm election in U.S. History?

Is there a better way to create LOTs of post-election chaos and
distraction as the Democrats attempt to steal elections
across the state of Florida?!

Mind you, no other hurricanes even hit the US mainland this year, but it appears that two major superstorms are striking Florida within a 44-day period.  Isn’t that very odd and worthy of serious contemplation?

If this rapidly unfolding situation does not sound VERY suspicious, how about the false tracking reports that were issued by NOAA’s National Hurricane Center in conjunction with The Weather Channel, Acuweather and all the other major weather reporting services during the evolution of Hurricane Ian.

An objective analysis of every official trajectory status report for Ian, issued by the National Weather Service during the days prior to Hurricane Ian making landfall near Cayo Costa in southwestern Florida, reveals that the people of Florida were deliberately deceived.  Due to those highly calculated criminal deceptions many residents died in place having stayed in their homes because of the patently false hurricane reports.

First, Ian was heading right toward Tallahassee.  Then, it was tracking toward Steinhatchee.  Next, Ian was on the way to Cedar Key.  Then they had the whole state and country focused on Tampa Bay.

Quite mysteriously, or rather quite intentionally by the geoengineers, Hurricane Ian abruptly made a beeline right into the barrier islands that protect the Cape Coral – Fort Myers metro area (after it sat off the coast for an hour or two being intensified into a Cat 4 by the geoengineers).  However, because of the extraordinarily large eye of Ian, every coastal town from Naples to Venice was seriously impacted, as you well know.

By the way, Governor, our dedicated Tallahassee weather watchers provided the inspiration of the following exposé which documents what was occurring in the skies right over your home and offices in the capital just prior to Ian’s direct hit. See: Weather War & Biowar Against Florida Amping Up Before Midterm Elections

Those many months of chemcloud cover in Tallahassee alerted us to a coming weather attack in the making which prompted this open letter to you: OPERATION HURRICANE IAN: An Urgent Open Letter to Gov. Ron DeSantis.

As we watched the very strange developments and tracking of Ian, we knew it was a highly engineered superstorm; for it had all the geoengineering signatures that distinguished it from a naturally occurring hurricane.

Because the storm forecasters were falsely predicting landfall in Tampa, this article was then written: Here’s why Hurricane Ian is deliberately being aimed by the NWO geoengineers at TAMPA BAY.

The pattern here is very simple.  The globalist-directed weather warriors first predict the landfall location; and then they move the hurricane in that direction with their highly advanced weather modification technologies.

The stark reality is that the New World Order cabal always had its sights set on the very wealthy and conservative RED counties of Southwest Florida because of their considerable influence on the outcome of Florida elections.

Likewise, the I-4 Corridor was also targeted by Ian because of the ballot weight that all of those counties have in the aggregate, especially on the outcome of Florida’s gubernatorial elections.

To really understand how these calamitous superstorms are literally manmade by the geoengineers, and then steered with great intent into specific regions of the Florida Peninsula, we recommend a viewing of the highly authoritative evidence of geoterorrism presented in this post: HURRICANE IAN—Florida’s 9/11: A Special Report

Lastly, it’s only a day until Election Day and now the whole state of Florida is being purposefully distracted by the slowly strengthening Nicole.  Inasmuch as many So. Florida residents are still in shock and/or recovering from the aftermath of Hurricane Ian, those folks are not even thinking of voting tomorrow; they just want to get out of harm’s way.  Therefore, we are talking about a collective case of Hurricane-related PTSD being taken advantage of by the NWO globalists.

That two of the most devastating superstorms in Florida history were named Ian and Ivan is certainly no coincidence.  Both hurricanes hit Florida barreling through the Gulf of Mexico.  Now we have Nicole on the Atlantic side coming at Florida so soon after Ian demolished whole areas of SE Florida.  Even folks in Central Florida are still talking the deluges and flooding caused by Ian, so how will Nicole adversely affect their intention to vote tomorrow?  When the superstorm-related PTSD kicks in, people will choose self-preservation and survival over keeping the state ruby red Republican.

Please, Gov. DeSantis, take this God-given opportunity to bravely expose the weather warfare that has targeted Florida over the past few decades.  The Internet is now replete with conclusive proof detailing the science and technologies utilized in the process of geoengineering superstorms and the like.  Your entire team ought to be well aware of this exceedingly dangerous type of weather warfare in view of both Hurricanes Ian and Michael.

You saw with your own eyes what transpired in the wake of Hurricane Ian.  You also witnessed the terrible devastation cause by Hurricane Michael which was specifically manufactured to thwart your victory over Andrew Gillum in 2018.

Should you win the gubernatorial election, surely you know that these acts of geoterrorism and weather warfare will only increase in number and intensity.  Therefore, we request that you expeditiously BLOW THE LID OFF this pattern of criminal geoterrorism now aimed at our state.

The people of Florida are counting on you to protect them and safeguard their property.  Please don’t let us down, Gov. DeSantis, particularly after the “urgent warning” that we issued to you well before weaponized Ian cut a swath of destruction through Florida this past September.

If not you, then who?
If not now, then when?
If not here, then where?