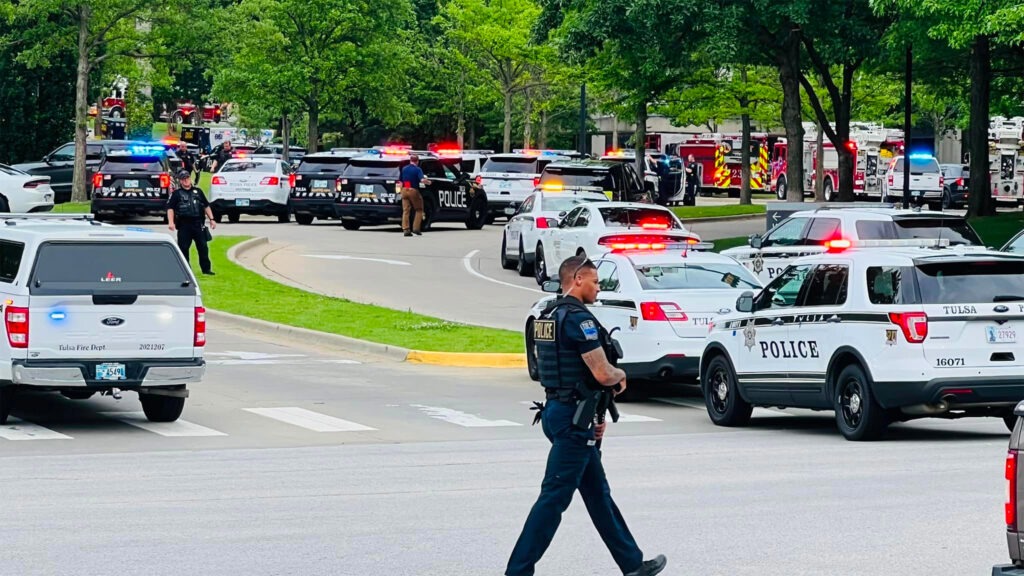 Gunman Kills 4 and Himself in Shooting at Tulsa Medical Office Near St. Francis Hospital – The Daily Beast

As predicted, yet another false flag, mass
shooting hoax conducted in a RED state
with the strictest abortion laws.

Could the nefarious goals and twisted objectives behind the false flag mass shooting operation at the Tulsa medical building be more obvious?!

First, they specifically chose a MEDICAL BUILDING at the Warren Clinic at Saint Francis Hospital in Tulsa, Oklahoma.  Abortions are performed in hospitals and clinics across the USA, but not in Oklahoma anymore.

Saint Francis is a Catholic, not-for-profit health system wholly governed and operated in Tulsa, Oklahoma whose mission is to extend the presence and healing ministry of Christ to all who seek its services.

The NWO globalist cabal doesn’t like Catholic hospitals because of how aggressively they push the state legislatures to pass strict abortion laws…which the Oklahoma state government recently did.

Secondly, the perps selected a very RED state where gun rights are sacred and never to be questioned.  Just like Texas, the globalists know that if they can intimidate the people of Oklahoma to willingly give up their firearms, the rest of the country will follow suit.  Oklahoma has even gone the extra mile to guarantee every law-abiding citizen their right to keep and bear arms according to the Second Amendment.

A person convicted of a “nonviolent felony” and who has received a “full and complete pardon” and has not been convicted of any other felony offense which has not been pardoned, “shall have restored the right to possess any firearm or other [prohibited] weapon . . . the right to apply for and carry a handgun, concealed or unconcealed, pursuant to the Oklahoma Self-Defense Act and the right to perform the duties of a peace officer, gunsmith, or for firearms repair.”[1]

Thirdly, these US government-sponsored Gladio-style acts of terrorism are being perpetrated in states whose election machinery is controlled by Republican secretaries of state.  The stakes could not be higher during the upcoming midterm elections and threats of further violence against the people of Oklahoma (just like the constantly attacked and murdered people of Texas) serves as a grim warning to those state officials responsible not to pursue any allegations of voter fraud or election theft.  Most old-fashioned conservatives throughout Okieland know in their bones that the 2020 POTUS election was stolen from President Trump.

While Trump won all 77 counties in Oklahoma in 2020, some Republicans in the state continue to make allegations of widespread voter fraud to energize voters this election year. Many recent polls have found that the majority of Republican voters don’t believe Joe Biden’s victory in the 2020 election was legitimate. Two-thirds of Republican respondents in a recent NPR/Ipsos poll said they believed voter fraud helped Biden win.[2]

Fourth, the perps almost ALWAYS time these shocking mass casualty events (MCEs) as a major distraction and/or diversion of attention away from a particular event.  While it may sound like a farfetched reason, the globalists are spittin’ mad about Johnny Depp’s awesome victory over CIA-contracted golddigger Amber Heard.  The defamation trial wasn’t supposed to end that way, especially after The Powers That Be have spent years wrecking and ruining Johnny’s reputation so that he will NEVER again work in the Motion Picture Industry.  TPTB determined long ago that an extremely famous and popular actor like Depp, with such a massive fan base worldwide, is much too dangerous should he ever decide to leave the reservation of Hollywood political correctness—FOR GOOD!  As follows:

Nothing changes the national conversation faster than an outrageous mass shooting of innocent Americans.  That folks are quickly waking up to the fact that women can be just as guilty of spousal abuse as men was absolutely abhorrent to the Democrat feminazis who scream “White Male Supremacists” on every street corner.  Hence, the defining moment of Johnny Depp’s epic win for the male half of the human race had to be swiftly replaced by some VERY bad news.  And so it was!  Globalism, after all, is fueled by fake arch-feminists like Hillary Clinton, Michelle Obama, Nancy Pelosi, Alexandria Ocasio-Cortez, Elizabeth Warren, etc. whose primary mission is to subjugate men across the planet to a New World Order dominated by woman leaders like EU President Ursula von der Leyen, ECB President Christine Lagarde, VP Kamala Harris and NZ President Jacinda Ardern.

As always, there are multiple aims and purposes to be accomplished by these never-ending, state-sponsored, false flag terrorist attacks.  Surely there are more than these four reasons which will likely reveal themselves over the coming days and weeks.  The super sleuths who regularly visit SOTN are encouraged to email us with any other answers to the question: “Qui bono?”  (SOTNeditor@protonmail.com)

This Alt Media platform makes it a monthly practice to pay very close attention to all the BIG events covered by the CIA’s Mockingbird Media after every apparent false flag psyop like this Tulsa MCE.  Invariably, what the Big Media-Big Tech crime colossus features on the front page of the Internet will certainly connect, directly or indirectly, to these purposefully staged OPERATION GLADIO events*.

Lastly, it’s of paramount importance to understand that the MCE Industry has become quite vast and prolific. (See: 5 people dead at Tulsa medical building, in the 233rd mass shooting of 2022)  Of course, these non-stop violent psyops are designed to manufacture a sufficient level of consent nationwide which will result in the effective annulment of the 2nd Amendment.  And, here’s how they’ve been able to get away with it for so long:

The bottom here where it concerns the spate of false flag mass shooting operations on Biden’s watch is that they will only continue to occur more frequently and more dramatically.

Every day we inch closer to November 8, 2022 will see more of these ‘October Surprises’ in the form of some type of mass casualty event carried out with a semi-automatic weapon.  The Democrats are very desperate to make gun control an election issue so bad is the rout they expect at the ballot box.  Which is why: