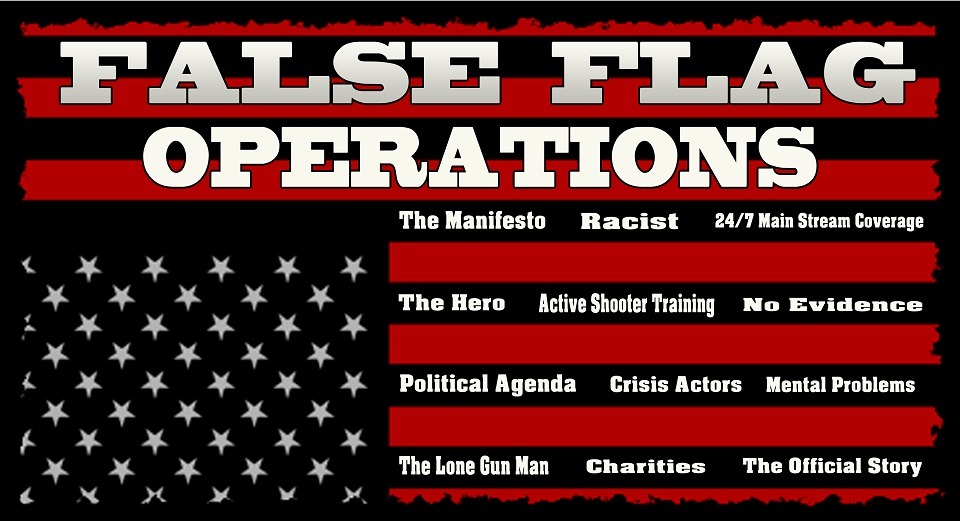 Why does no other country on Earth have mass shootings like the USA?!

Because every violent mass casualty event
is carried out as a US government-directed
false flag operation and national psyop
designed to ultimately strip the American
people of their right to to “to keep and
bear Arms” — THAT’S WHY!

It’s of paramount importance to understand that the U.S. Federal Government under Manchurian Candidate Barack Hussein Obama approved legislation that granted the power to the Department of Defense to conduct black operations against the American people, and then disseminate the wholly fabricated propaganda associated with those false flag attacks.

In other words, the Obama administration unconstitutionally codified the illicit authority/power to murder and harm the US citizenry effectively committing treason against the American Republic.  In this way, the government traitors themselves wrongfully ‘legalized’ their treason perpetrated as unrelentingly violence and psychological warfare against the body politic.   As follows:

Let’s be clear: The Powers That Be have employed the violent strategy of mass shootings and bombings from time immemorial to accomplish their nefarious goals.  It’s just what they do … because it works so darn well.

As matter of historical fact, the power elite has been perpetrating major mass shootings against the American people since at least 1891.  What follows is a timeline of these mass casualty events (click on the graphic below to enlarge).

However, the defining moment when these false flag mass shooting operations were specifically executed as a part of the highly organized strategy to nullify the Second Amendment occurred on August 1, 1966 at the University of Texas in Austin. See: Yet Another October Surprise in May—But why Texas?!

Just as the U.S. Federal Government was directly responsible for the assassinations of JFK, MLK, RFK and Malcom X during the 1960s, it was also culpable for the University of Texas tower shooting that was carried out by an ex-Marine sniper who was an obvious graduate of the CIA’s MK-ULTRA Monarch mind control program.

Really, how plainly obvious is that?!

Which means that the government has been outright slaughtering the US citizenry at will for the past 56 years.  Yes, many of these mass casualty events (MCEs) have been meticulously staged as Hollywood productions where no one was actually killed at the alleged crime scenes, but that doesn’t mean the ‘shooting victims’ were not murdered elsewhere. (Just like the same murderous perps had to permanently eliminate the 9/11 airplane victims.)

When compared to the rest of the world, the United States experiences a rate of mass murders by firearms, specifically by automatic and semi-automatic rifles, that defies all logic and human reason.  Per capita, there are far, FAR, more [ALLEGED] mass shootings in the United States than anywhere else on planet Earth.  This extremely disproportionate number can only be explained by a highly organized nationwide conspiracy that makes the massacres HAPPEN ON PURPOSE, which are then covered up by law enforcement at all levels in collusion with the CIA’s Mockingbird Media (i.e. all corporate media outlets).

KEY POINT: It’s also true the perps in charge of these black ops always
keep an AR-15, M-4 or AK-47 on hand to drop off at the staged crime scene
that will be blamed for the carnage. See: As always, the CIA’s Mockingbird
Media goes full bore in blaming assault rifles for their recent false flag mass
shooting (hoaxes).

Common sense ought to tell the US citizenry that these false flag mass shootings are conducted with highly purposeful design … and that most of them simply don’t make any sense BASED ON THE OFFICIAL NARRATIVES.

However, just like the young and often white male patsies who were selected as the fall guys for these false flag operations were fastidiously mind-controlled by their government handlers, so, too, have the American people been mind controlled like no other populace on the planet.  Likewise, they have been subjected to decades of intense and relentless social engineering into the pen of false belief that these are all ‘real mass murderers with a grudge’.

In point of fact, Americans have been incessantly mind controlled by Tavistock-level techniques and tactics which have been systematically employed by all levels of government, the entire mainstream media, educational institutions from pre-K to Post Grad, virtually every religious group, NGOs of every sort and kind, and every major organization that comprises civil society.

Nevertheless, these quite formidable forces arrayed against US should not repeatedly cause the complete suspension of common sense, critical thinking and the application of human reason by a vast majority of citizens, especially when these mass casualty event are carried out as transparent hoaxes.

The Uvalde Texas School Shooting is a Complete and Total Hoax

At the end of the day, it is only the American people who are to blame for the nonstop series of mass shootings across the USA, both real and fake, both hybrids and hoaxes.  For it’s their willful ignorance and deep denial and refusal to confront the enemy within that permits the dark side to perpetuate their stealthy perfidious strategies.  Why wouldn’t the globalist perps roll ’em out one after another, year after year, decade after decade, it’s worked so well for them up until this very day!

All folks really need to do is a little research on the Internet to uncover the absurd flaws, glaring inconsistencies and outright contradictions with each of the juvenile official narratives routinely presented in the wake of these MCEs.  The average American already spends so much time on the net, and especially on social media, so why not look for some liberating truth.  For example:

For those truth seekers who really want to know what time it is in America, deeply penetrating exposés like the one that follows will tell them everything they need to know.  It’s quite true, the hidden information and esoteric knowledge presented in just this one post is enough to empower people to finally take back their power from those who have been stealing it from them for a long time.