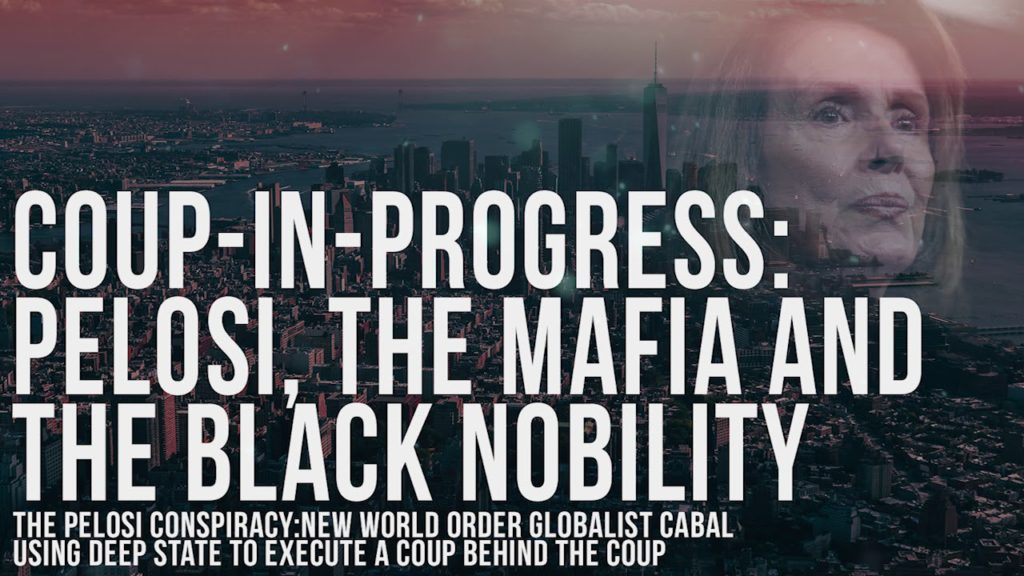 “Nancy Pelosi just jumped the shark … but probably for the last time.  When she coyly floated impeachment to threaten Trump, she also telegraphed her own political aspirations.  Coercing a POTUS not to exercise his constitutional responsibilities is a very BIG deal.  Pelosi knows that.  Which is why she continues to throw her weight around as though she’s an 800-pound gorilla.  Pelosi does have a lot more power and influence and money in her corner than anyone knows.  Her true NWO masters have been setting her up to be POTUS for decades.  Which is why this political gorilla believes she can sit wherever she wants to.  The globalists think they own the whole place.  Deep State is in their back pockets.  As is the entire Democrat Party.  Pelosi was selected to lead this communist color revolution to overthrow the Republic.  She’s also the point man conducting the soft coup against Trump before it becomes a violent coup d’état after the election.  So she’s strutting her stuff  like no other politico ever expecting to occupy the White House sooner than later.”

For one thing, the DNC is well aware that, according to the U.S. Criminal Code, Joe Biden is permanently disqualified from holding any public office in the U.S. Federal Government.  The hard evidence of Biden’s naked criminality and corruption comes from his very own words heard in the following video.

QUID PRO JOE: In Biden’s own words, he threatened the withdrawal of
$1 billion in loan guarantees unless Ukraine prosecutor
who was investigating Burisma was fired. (Video)

Moreover, Biden’s son Hunter was officially identified as posing a serious ‘Counterintelligence, Extortion and Sex Trafficking’ concern not only in the Ukraine but also regarding his Russian and Chinese business pursuits.

Of course, the whole world now knows that Joe Biden is mentally unfit to hold any office in the land much less high office.  All of his public appearances during 2020 have demonstrated that his mental faculties and speaking ability are seriously debilitated.  In short, Biden desperately needs to be housed in an assisted living facility with a memory unit.

There’s one more HUGE problem that a Biden candidacy faces on November 3rd.  Not only has he refused to condemn the rioting, looting, burning, violence and destruction perpetrated by radical Left terrorists in cities across the USA, Biden often appears to condone it.

What follows are just a few examples of how much Biden has been excoriated for his essentially treasonous reactions to the widespread BLM and AntiFa terrorism.

As if these are reasons not enough to forever torpedo Biden’s presidential aspirations, it’s critical to understand that Biden, just like Bill Clinton, was quite credibly accused of rape. See: Joe Biden was accused of not just sexual assault but RAPE! (Video)

Not only that, but the Internet is replete with video documentary evidence proving that Joe Biden is a longtime and perhaps incurable pedophile. See: Why are the Democrats nominating a known pedophile?

What’s the point of presenting these major elements “The Biden Fiasco”?

Biden is clearly the most flawed POTUS candidate in U.S. history.

However, this stealthy and deceitful plan has been carried out with highly purposeful design.  There are two primary stages to this scheme to install a female Democrat feminazi into the White House.  The first phase is well explained in the following exposé.

However, the criminal conspiracy to install Kamala Harris into the POTUS has gone off the rails.  She is not only detested by the Right, her own party flatly rejected her POTUS candidacy.

Hence, now that the Democrats realize that Biden is essentially unelectable, they have pushed the button on their “Plan B”. 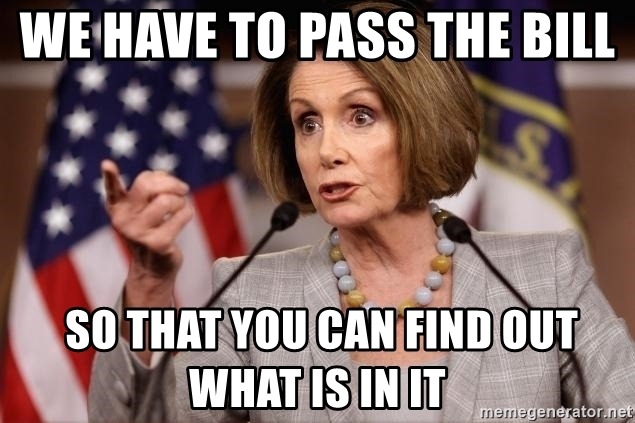 Here’s the plan.  The insane plan, that is, uses the very crazy, mentally challenged, drug addicted, alcoholic Nancy Pelosi as their ace in the hole.  As if she can trump the most daunting Trump card in American electoral history.

It’s important to note that the above quote by Speaker Pelosi was shamelessly uttered in 2010 before the passing of Obama’s disastrous Affordable Care Act.  The crucial point is that that was 10 years ago.  So it’s clear that Pelosi was crazier than a road lizard back then; therefore, just imagine how easily she can be used to further destroy the Republic today.

There is ONLY one way to truly grasp the profound level of Pelosi’s sheer treachery, corruption, lunacy and betrayal.  The following exposé lays bare the well-hidden back story that informs so much of what Pelosi has willfully perpetrated and willfully neglected as the powerful Speaker of the House.

There has always been a communist conspiracy in place to collapse the United States of America in order to transforms the nation into the USSA where “A” stands for Amerika.  Pelosi, Clinton, Obama, Schumer, Schiff, Biden, Harris et al. have all been chosen as the frontmen to spearhead this color revolution.  Each of these hardcore traitors to the Republic has been strategically positioned to do their dirty deeds when the NWO cabal decides to go nuclear.

This is why Pelosi so cavalierly refused to rule out impeaching Trump for simply appointing the SCOTUS replacement for Ruth Bader Ginsburg.  She really believes she holds all the cards going forward, particularly where it concerns the ultimate outcome of the election. See: Will the Democrats resort to premeditated murder?

But exactly what is their “Plan B”?

Stealing the election via nonstop lawfare

Once the lawsuits start flying across the country by Democrat lawyers who have already been identified, it will be very easy to run out the clock until Inauguration Day— January 20, 2021.  Given the overwhelming barrage of lawfare activity generated by Leftist lawyers in the sanctuary cities and sanctuary states in particular, the normal election process will grind to a halt.  That’s their stated goal, so that Trump will not be inaugurated.

Once January 21st arrives without a clear POTUS winner, Pelosi will be in the catbird seat.  Assuming she wins re-election in her ultra-liberal San Francisco district, all she has to do is secure another term as Speaker in order to slide into the Oval Office pursuant to the United States presidential line of succession (see the blue highlighted info in the graphic below). 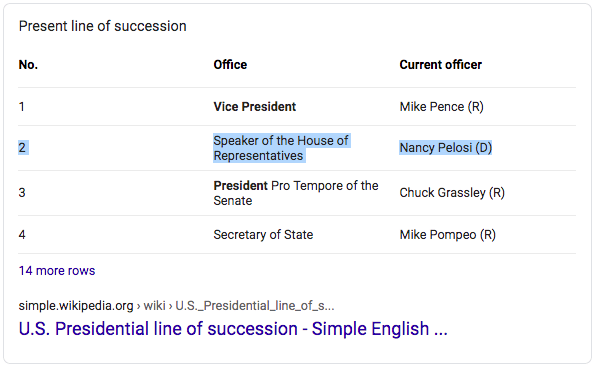 In point of fact, both President Donald Trump and Vice President Mike Pence will be removed from office on Inauguration Day should the United States Electoral College not certify and declare an official winner by Wednesday, January 20th. 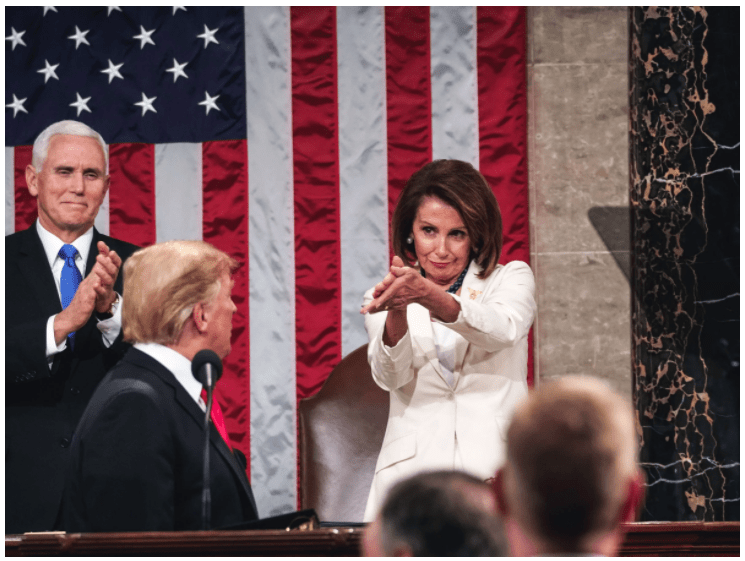 Speaker of the House Nancy Pelosi’s disrespectfully claps President Trump’s face during the 2019 State of the Union speech.

KEY POINTS: Nancy Pelosi has committed heinous acts, displayed shocking disrespect and made numerous outrageous statements throughout her various terms in office as no other member of the U.S. Congress ever has.  She obviously feels empowered and protected by an all-powerful force as she behaves as though she enjoys total impunity.  The American people have never seen this official misconduct before, especially IN BROAD DAYLIGHT and DURING PRIME TIME (see the preceding and following photos).  Therefore, it’s imperative that she be removed from office post-haste and prosecuted to the fullest extent of law with the many other VIP traitors, such as George Soros, who are all hellbent on collapsing this Republic. 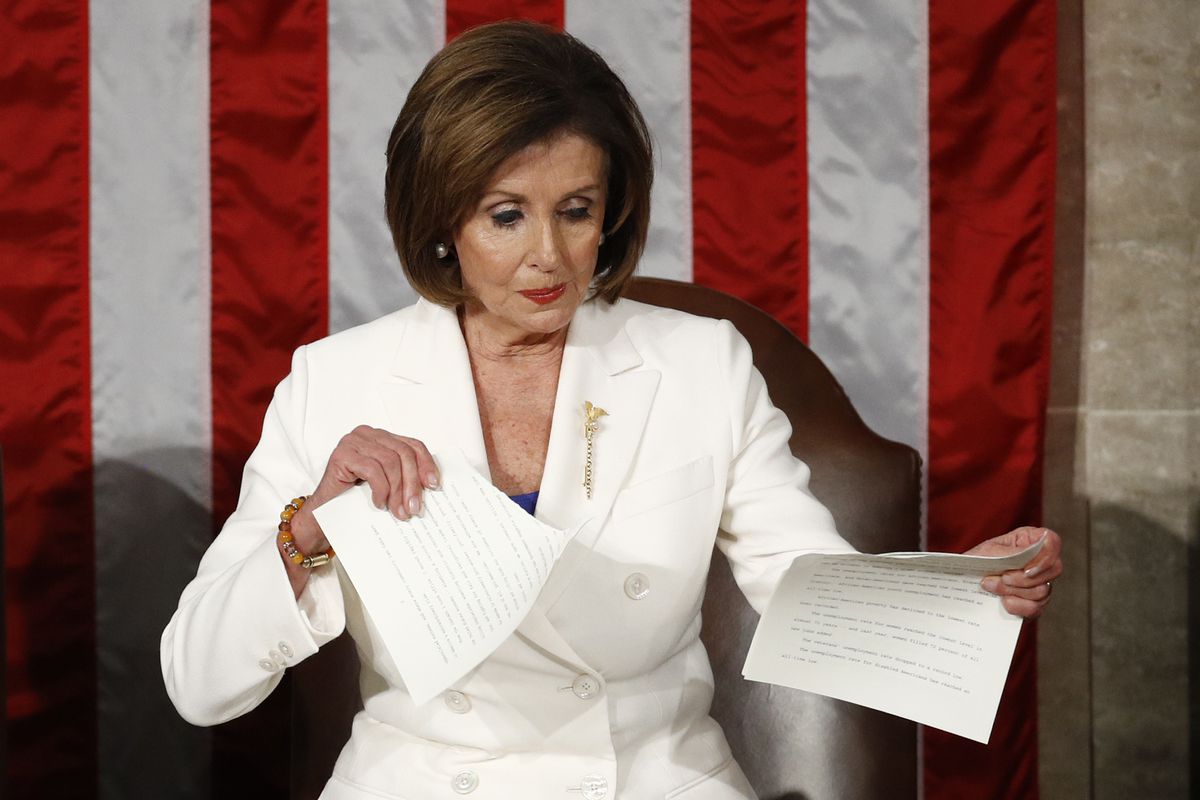 At this late date, it’s vital to understand that Pelosi plays just one part in a much larger agenda known as Cultural Marxism.  Whenever it concerns the planned destruction of the USA by the cultural marxists, it’s well understood by those initiated by the Alt Media that these barbarians are inside the gate and have been roaming freely since the Federal Reserve Act of 1913.

As for the pivotal role that Pelosi plays in this ever-darkening national tragedy, the following excerpt on PELOSIgate succinctly spells it out.

Her real job is to corral all the other feminazis, communists and bolsheviks and keep them on the reservation of Cultural Marxism. Only highly trained and brainwashed feminists can advance the extremely destructive cultural marxist agenda without flinching. That’s precisely why these ‘women’ were chosen just as the whole world saw a 28-year-old bartender and hardened socialist — Alexandria Ocasio-Cortez — transparently installed in the Brooklyn congressional district.
(Source: PELOSIgate: The Radioactive Scandal That Will Rock America)

Of course, the star of this flaming feminazi show today is Kamala Harris.  There is arguably no other politician in America who is as dangerous as Harris; and that includes the exceedingly treacherous Adam Schiff.  Just how baneful a Harris presidency would be to the American Republic is presented in the article under this title: KAMALA HARRIS: The Single Most Dangerous Manchurian Candidate in U.S. History.

The California Senator is an obvious communist Manchurian Candidate and planned POTUS replacement for “Crazy Uncle Joe”.Which is all the more reason why the Democrats can never again be permitted to occupy the White House. Neither Joe Biden nor Kamala Harris can be allowed into the Oval Office. Such a dangerous and destructive “Bonnie and Clyde” duo would bring the final end to the American Republic.

Because of that stark reality, this is Trump’s election by a likely landslide.

The ever-scheming DEMs know this full well and have planned accordingly.

Shoehorning Pelosi into the White House is their only alternative short of starting a full-blown race war as a prelude to triggering Civil War II.

However, just as RBG passed away during this decisive election year, the 80-year-old congresswoman from California rules the roost on very shaky ground indeed.  Just like Biden, she really shouldn’t be there.  Nevertheless, the Democrats have never been a party to shy away from inflicting in-your-face elder abuse. See: THE POLITICAL SCANDAL OF THE DECADE 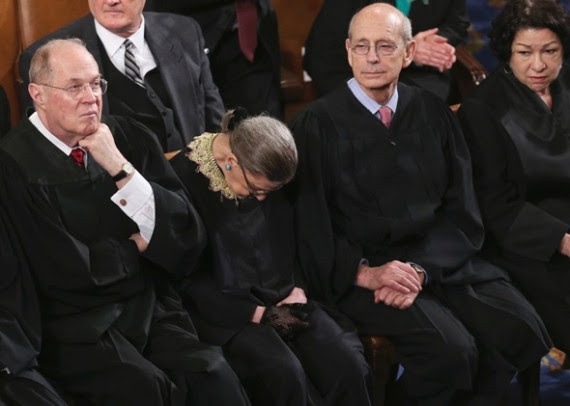 This photo proves the Democrats were guilty of outright elder abuse and everyone knew it!

The bottom line here is that the New World Order globalist cabal, the Democrat Party and Deep State will do everything within their collective power to force fit Nancy Pelosi into the Oval Office.  If that happens, the pre-picked communist government that’s hiding in the closet, will be appointed one communist functionary at a time to the new totalitarian Pelosi regime.  Then tyrannical Pelosi will begin unilaterally stripping the last vestiges of this constitutional republic.

With this unacceptable prospect looming large on the horizon, it’s of paramount importance for the Patriot Movement to prepare for any outcome.  Truly, it’s never been so crucial for all patriots to unify and to do whatever’s necessary to preserve this Republic.  Once the traitorous communists occupy certain seats of power, it will be difficult to remove them.  Hence, the Right needs to be prepared to fight their own version of Civil War 2.0.

MILITARY TRIBUNALS: Why They Are Absolutely Necessary

Now the Truth Movement knows how the cultural marxists are using a drug-addled, dementia-ridden menace to society — Nancy Patricia Pelosi — to destroy the American Republic.