ANATOMY OF THE WAR PLAN

Everything now points to a highly deliberate series of black ops and psyops carried out in both Iran and Iraq with the purpose of destabilizing both governments.

President Trump’s extraordinary collusion with the apartheid state of Israel, as well as with the tyrannical Kingdom of Saudi Arabia, since his first day in office, clearly indicts him for serial warmongering throughout the Mideast since day one.

Despite making several false moves to withdraw the U.S. Military from the various theater of wars in the region, it’s now evident that each of those maneuvers was intentional acts of fakery.  And, it was his base that got faked out every time. Nevertheless, each time Trump has successfully pulled off this scheme, the Right has come to his defense.  Even though they voted him into office for his stated peace-making agenda, they permit him to prosecute every single forever war that was started by the previous 4 presidents.

Of course, there’s no place on Earth more vital to the continuity of the rogue nation of Israel than the extremely geo-strategic Shia Crescent.

Israel knows that today’s advanced weapon technologies have profoundly changed the Northern Levant battleground.  Various types of long-range ballistic missiles alone have irreversibly changed the battlefield calculus so much that Israel now knows it’s a sitting duck.  A wrong move by the Zionist warmongers in Tel Aviv can turn their city into a glass parking lot in a matter of hours.  Not only that, the entire Israeli national crime syndicate would be transformed into a smoldering heap of rubble in a Mideast flash.

In view of these new realities, the Zio-Anglo-American Axis is making extremely bold yet remarkably stupid moves all over the place.  Their most recent series of blunders is now known as SOLEIMANIgate, which was then followed by other disastrous debacles.

Each war crime, each diplomatic fiasco, each terrorist attack, each psyop, each black operation has reflected Trump’s undergirding and calamitous foreign policy: that “right makes right”.

In point of fact, American militarism has been on full display all over the Mideast geopolitical chessboard because the Neocon Zionists only know war and terrorism, disaster capitalism and gunboat diplomacy, chaos and conflict.  Because Trump exemplifies their exceedingly militant philosophy of war-making — “America, right or wrong “— they are using him as their Napoleon.

The primary Neocon MO is to conduct false flag attacks against any target in the Middle East (ME) in order to justify illegal acts of war just like Trump just carried out in Iraq.  Once they have galvanized the US citizenry to support those hideous wars, they escalate them to the point of all-out savagery and barbarism.  Were the truth known about U.S. warmongering throughout the ME and North Africa, the American people would be horrified by the slash and burn tactics being used as the spearhead of what is essentially disaster capitalism—Yankee style.

How many times have We the People watched these very same Neocon warmongers lie the nation into yet another war of aggression … … … for the apartheid state of Israel.  Well, here we go again whereby the Zionists now give direct orders to Trump, and Trump willingly complies with those orders from what is basically a foreign enemy.

Very few analysts understand how complex and convoluted the criminal conspiracy that Trump is running with really is.

What follows is a distillation of the recent war plot concerning Iraq and Iran that was unlawfully executed by Trump and blessed by many senior Republicans in Congress.  But first these 6 exposés ought to be considered in order to properly understand the vital background.

SOLEIMANIgate: Was Trump blackmailed or bribed to assassinate the Iranian hero? Or, was he a willing co-conspirator in the murderous plot?

BLOWBACK COMING: The Illicit Assassination of General Qasem Soleimani by Trump Was an Act of War and Epic Blunder

Now, here’s the timeline of the most decisive events that have just rocked the pivotal Shia Crescent:

While Trump was under withering assault by the international press for his illegal assassination of Iranian General Qasem Soleimani, he issued threats of destroying 52 strategic locations in Iran including cultural heritage sites on January 5, 2020. See the Google results below: 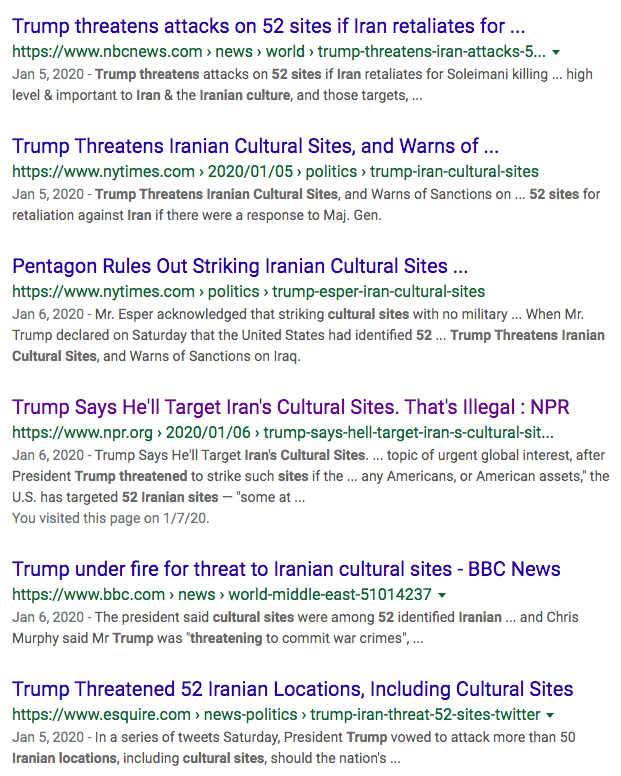 Not only did Trump’s pledge to commit war crimes against Iran immediately change the global conversation away from his illicit killing of Iran’s greatest hero, it also created a conducive environment for the Ukraine shootdown to occur in Tehran.

Of course, the Iran-hating Trump administration knew this would occur.

The Neocon Zionist warmongers especially knew that such a reckless and odious threat would divert the attention from their barbaric murder of several other Iranian and Iraqi commanders who were actually responsible for wiping out ISIS in the Northern Levant.  After all, ISIS was a creation of the CIA-MI6-MOSSAD cabal for the purpose of terrorizing the indigenous peoples away from their ancestral lands in both Syria and Iraq, which it did.

So, Trump’s threat of state-sponsored terrorism against Iran further added to the volatile mix in the region, and especially provided a context for the airliner shootdown.  No POTUS in history has ever made such public threats to commit war crimes against a sovereign nation.  Therefore, it’s clear that a serious black operation was in the works…and Trump’s repugnant threats were a crucial part of the psyop.

The funeral of Qasem Soleimani, an Iranian major general in the Islamic Revolutionary Guard Corps (IRGC), was held from 4 to 7 January 2020 in some cities in Iraq and Iran – including Baghdad, Karbala, Najaf, Ahvaz, Mashhad, Tehran, Qom, and his hometown Kerman. The funeral ceremony of Soleimani in Tehran was described as “the largest in Iran since the funeral of Grand Ayatollah Ruhollah Khomeini,” founder of the Islamic Republic of Iran, in 1989.[1]

During that biggest funeral in Iran ever for Qasem Soleimani, all of humanity became aware of just how revered the Iranian hero truly was.  Those sentiments were likewise being stirred throughout Shia Islam communities worldwide.  This developing situation posed a PR disaster for Trump and his Neocon Zionist co-conspirators.  Therefore, they conceived a nefarious scheme to distract the global audience.

On 7 January 2020, a stampede took place at the burial procession in Kerman, killing at least 56 mourners and injuring over 200.[4] Consequently, Soleimani’s burial was cancelled.[1]

Not only is it quite likely that the cabal triggered a stampede at Soleimani’s funeral, as they did against 2177 Iranian pilgrims attending the hajj outside Mecca in October of 2015, this heinous act was perpetrated to quickly distract people everywhere from a funeral that was profoundly inflaming passions against the Zio-Anglo-American Axis (ZAAA). See: Did Saudi Arabia Conspire With Israel To Trigger The Hajj Stampede That Killed Over Iranian 2150 Pilgrims?

For it is the incessant warmongering by the Western powers throughout the Middle East and Northern Africa which has killed and injured millions, as well as displaced millions of refugees since 9/11.  Each of the targeted countries has been the victim of unprovoked wars of naked aggression stealthily launched to advance the catastrophic Greater Israel project.

Trump has become the world’s greatest pitchman for the Greater Israel project.  Hence, he was chosen to be the aggressor against Iran since his very first days of campaigning after he declared his candidacy in June of 2015.

It’s now clear that Trump, himself, either has an irrational hatred of all things Iran, or he was fastidiously mind-controlled by his Jewish Zionist masters to stoke the flames of hatred against them.  Of course, these two scenarios are not mutually exclusive.

Therefore, it came as no surprise, particularly in light of so much reprehensible presidential conduct, when Trump threatened Iran yet again with destruction of their cultural heritage sites.

It was that presidential psyop that set up Iran for the downed passenger jet.

On January 8, the whole world was shocked with the news about the accidental shootdown of Ukraine International Airlines Flight 752 in Tehran.  Or, was it really accidental?

Did Israeli cyber-terrorists hack the Iranian air defenses to trigger the Ukraine airliner shootdown after the plane was sabotaged forcing a turnaround?

What this shootdown immediately did was shift the world’s attention from Trump’s despicable war crime to the terrible tragedy in Tehran.

There are several aspects to this airliner shootdown that indicate it was a CIA-Mossad black operation.

First, there was an instantaneous spate of accusations levied against Iran by many of the Western powers before any evidence was even acquired or evaluated.  It was as if each head of state was reading from CIA-prepared cue cards, so similar was the language and inflammatory rhetoric at a time of great mourning and grief.  This is a common tactic of the CIA’s Mockingbird Media— the MSM organs of propaganda simply overwhelm their prey before they can even get their bearing (and in this particular case, right in the middle of the biggest funeral in Iranian history).

Then there are suspicious occurrences such as these:

How were there multiple videos taken from different angles of this staged event after dark?  Why would anyone be taking a video of that exact part of the sky?  See: Individual Who Took ‘Shootdown’ Video Arrested in Iran

What is clear is that Trump’s brash threat significantly increased the likelihood of this type of tragic error to occur.  That is, of course, if this context was really cunningly set up by the CIA-MI6-MOSSAD cabal.  In this way, there is plausible deniability that vindicates the Western Intelligence Community, even though this crime against humanity was surreptitiously calculated and carried out in Tel Aviv.

The perfect timing of the shootdown, and especially how it changed the favorable momentum moving in Tehran’s favor, cannot be denied.  Everything points to an elaborately planned psyop in the aftermath of a black operation which was really a quite purposeful terrorist attack.

CAVEAT: The sooner the American people wake up to this deteriorating state of affairs, the sooner this last attempt to destroy the America’s standing in the world will be terminated.