…in order to set up the global
geopolitical chessboard for
their long-planned hot phase
of World War III to ultimately
form a One World Government.

Just as the world witnessed prior to First and Second World Wars, the New World Order globalist cabal and international banksters are manipulating/coercing nations everywhere to set the stage for an apocalyptic global conflict.

In point of fact, the major moves and massive maneuvers being executed on the global geopolitical chessboard since 9/11 are quite similar to the naked warmongering by the Anglo-American Axis prior to both World War I & II.

As always, Europe is ground zero for this utterly manufactured armed conflict in Ukraine that will be used to incite a World War III scenario.

Whereas World War I was deliberately triggered in Sarajevo, Bosnia in southern Europe, and World War II was intentionally started in Poland (Eastern Europe), World War III is being quite purposefully provoked in Eastern Europe—the Ukraine.

But why are these world wars always staged in Europe?

The Zio-Anglo-American Axis knows that a close political/economic alliance between Germany and Russia would spell the final end of the dying US-UK Empire.  The Western political establishment will simply not tolerate this; nor will the wealthy elites of US-UK-EU accept the ascendancy of a Russian-German power structure built around the most powerful economic engine the world has ever seen.

What the elites are really afraid of is the natural marriage of German capital, technology, market monopolies and industrial efficiency with Russian natural resources, manpower, scientific knowhow and industrial capacity.  Such an economic powerhouse and financial union scares the living daylights out of London and Washington and Tel Aviv.

The West especially knows that a continuous flow of Russian natural gas and oil to Germany is just the beginning of a much closer trading relationship, which the US-UK-EU-NATO warmongers will block by any means.  Hence, the Zio-Anglo-American Axis is determined to provoke a devastating war between Russia and Ukraine in order to thwart any movement toward detente between Berlin and Moscow.
(Source: IT’S WAR! A Zio-Anglo-American War Against Russia)

Of course, there are many other quite significant reasons why the rapidly dying US-UK Empire is pushing Russia and her allies into this war to end all wars, specifically in 2022.

What follows are some of the primary objectives and main motives behind the commencement of the Ukraine War at this particular time in world history.  As always, war serves as a captivating distraction from all of the following NWO schemes and conspiracies. (See: Fearful Power Elite + Failed Covid Plandemic = Distracting World War 3)

(3) Controlled Demolition of the Global Economic and
Financial System

(4) Acceleration of the Great Reset via Digital Crypto-
Currencies

(6) Establishment of a One World Government &
Global Security Superstate

(Source: THE MOST PERILOUS MOMENT OF THE THIRD MILLENNIUM—Why?!)

What the entire planetary civilization will experience throughout the highly consequential period of 2022/2023 cannot be avoided at this point.  Exactly which eventualities can be somewhat averted and/or mitigated remain to be seen.

The Western powers have painstakingly fabricated a dire convergence of circumstances throughout the world community of nations which have firmly set the trajectory for World War III.

At this very late date, because the NWO warmongers have carved out such a deep and wide groove toward regional war in Eastern and Central Europe, their end goal of World War III seems inevitable.  The Russo-China alliance will only tolerate so much interference and provocation from the ever-offensive and insufferably arrogant Zio-Anglo-American Axis.

It is important to note that all of the globalist schemes and bankster enterprises listed above are being carried to accomplish their ultimate ambition explained here: 2022: The Controlled Demolition of Everything 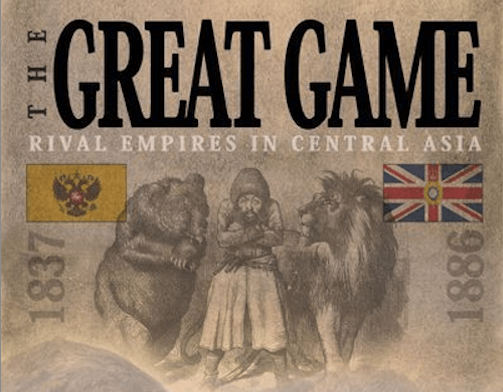 The euphemistically memed Great Game, that was first launched by the international banksters safely sequestered in the City of London after the formation of the British East India Company, is really an all-out war against the Russian Motherland.  Simply put, the Zio-Anglo-American Axis wants to steal everything that belongs to Russia.

This is why the Ukraine, along with all the former Soviet republics (i.e. “Stan” countries) located on the southern flank of Russia are under constant assault by the West.  However, because of its close proximity to Moscow, the Western powers have been determined to merge Ukraine into NATO (aka North Atlantic Terrorist Organization).  The distance from the center of Moscow to the Russian-Ukrainian border is only 450 km or 280 miles.

As a matter of historical fact, the Ashkenazi banksters and Zionist warmongers originally hail from the Kingdom of Khazaria which is where much of the Ukraine is located today.  So there’s a lot of history between (i) the hidden hand that’s behind the endless provocations, unprovoked wars and terrorist attacks against Russia and (ii) “the Rus’ people”.

Needless to say, the ZOG-dominated governments of the West are hellbent on conquering Russia one way or another.  The next phase of this never-ending war will take the form of economic sanctions, financial terrorism, monetary destruction, corporate sabotage, commercial marginalization and currency wars.

In view of the constant scapegoating that Russia has experienced for several decades, it’s now clear what the NWO cabal has planned.

This war in the Ukraine was instigated by the West with much premeditation in order to set up Russia as the universal “bad guy”.  In this way, all future world crises and catastrophes will be laid at the feet of the Kremlin.

For example, an unparalleled cyber-war (really launched by the US government) against the American people can now easily be blamed on ‘Russia’.   In this fashion, nations across the planet can be taken down in a day and a night.

From this point forward, every energy crisis and armed conflict, financial breakdown and economic collapse, worldwide pandemic and climate cataclysm, etc. will somehow be blamed on the “BIG bad Russian bear”.

This is exactly how the Great Game was always meant to end; with the whole world unifying against the innocent Russian Federation and falsely justifying a world war in order to take over the largest landmass on Earth.

On a parallel track, there is also the standard CIA-MI6-MOSSAD “color revolution strategy” at work throughout this highly engineered global drama.  First, the West intends to sanction Russia to the point of a severe economic depression so that the citizenry will eventually rise up against Team Putin.  Then, the Zio-Anglo-American intel agencies will spring into action by executing a violent revolution throughout Russia, much as they attempted to do this year during their “Bloody January” black operation in Kazakhstan.

CAVEAT: What humanity is now dealing with is an exceedingly dangerous international crime syndicate of warmongering psychopaths.  They know we’re at the end of an era.  And, that their tyrannical rule is in great jeopardy.  These satanic elites are also aware that a new reign of righteousness is around the corner.  Therefore, they will do everything in their power to wreck and ruin the global order, IF THEY CANNOT GET WHAT THEY WANT.  For example, watching a nation like Ukraine undergo destruction is entertainment for them.  In other words, if the power elite can’t have it, nobody will.