THE GREAT REOPENING: There’s No Stopping It!

The whole world is now witnessing the greatest awakening in human history.

Can you feel it?!

Citizens in nations large and small are now defying illegal lockdown orders.  For example, restaurants are opening by the tens of thousands in outright opposition to unlawful government decrees to shut down.

Over 50,000 Restaurants in Italy Declare “I Am Open”
Defying Lockdown Measures

People, it doesn’t get any bigger than this.

That’s because it doesn’t get any bigger than the mass displays of people power that are occurring at an increasing rate around the world right now.

The following titles have appeared since the Italians have courageously taken back their power from the criminal Coviteers in both Rome and Brussels.

CORONAhoax: The People’s Revolution Was Always Destined to Start in Italy

The Global Revolution Against THE GREAT SCAMDEMIC Begins!

This global revolution against the perpetrators of THE GREAT SCAMDEMIC was always destined to begin in Italy after Milan was attacked by the Gladio bioterrorists who launched the COVID-19 bioweapon there in early 2020. See: THE GREAT SCAMDEMIC OF 2020 IS COLLAPSING…

The whole Lombardy region has been the site of one of the deadliest series of acts of bioterrorism in world history.  The Italians are now aware of this and aren’t taking it anymore.  See video below.

Mexico has also joined this global revolution against the power elite. See: Mexican Restaurants Join Forces and Open Up in Defiance of Shut Down Mandates

So have Poland and Switzerland and Israel and Greece and Rwanda and California joined this worldwide movement to take back their power from the criminal politicians who are literally robbing them of their livelihoods.

Taking it to a whole new level of violent defiance, here’s what the people of Guatemala did last year: Guatemalans burned the municipal building in their canton when the police began jailing and fining people for operating their businesses in violation of lockdown orders (Video)

KEY POINT: Everyone on planet Earth needs to know about THE GREAT REOPENING planned for January 30th of 2021.  How ever folks can participate locally or globally, this event must be well attended to send a loud and clear message to the criminal Coviteers that, from this point forward: “We Are Open!”. 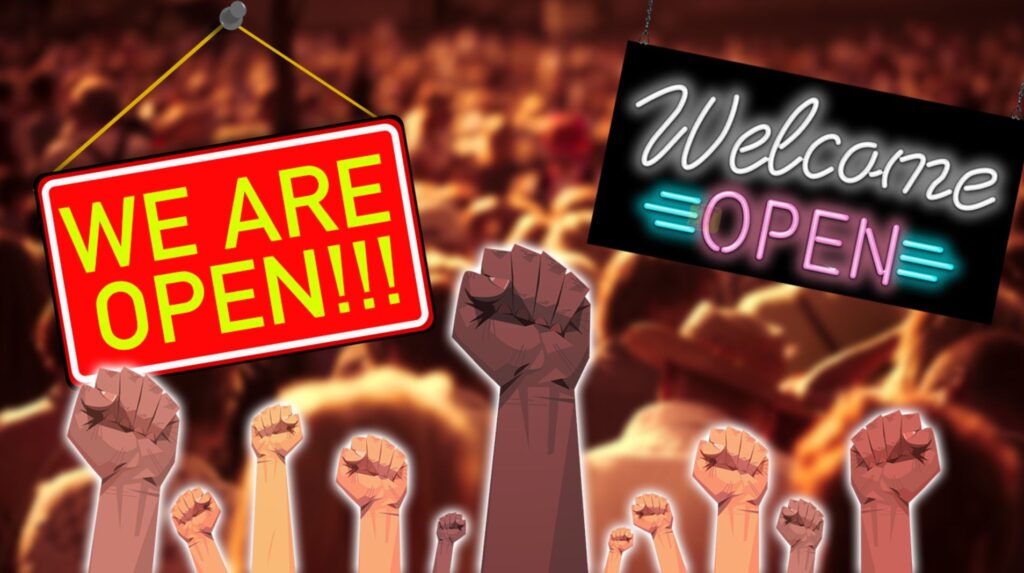 THE GREAT REOPENING has begun on earnest.

Citizens in every nation are aware of the economy-busting Plandemic.

“Mom and Pops” across the planet are especially aware that the CORONAhoax was launched to target them.

Who in 2021 is not cognizant of the fact that THE GREAT SCAMDEMIC was carried out by The Powers That Be with the explicit intention of implementing the incomparably devastating GREAT RESET?

And, toward that end, STUPID-19 was a global psyop designed to mind control program the masses into collapsing their own livelihoods.

However, that’s all about to change.  This nefarious New World Order globalist scheme is soon to crash and burn via: 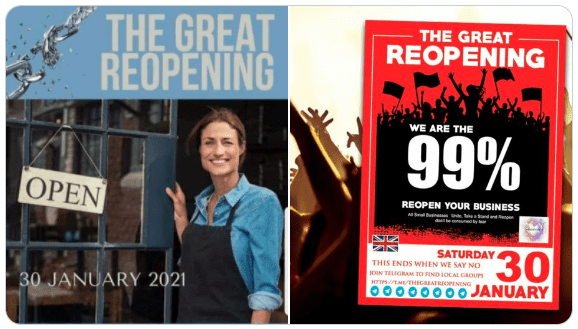