NATO Is Arming and Training Nazis in Ukraine, as US Floods Russia’s Neighbor with Weapons 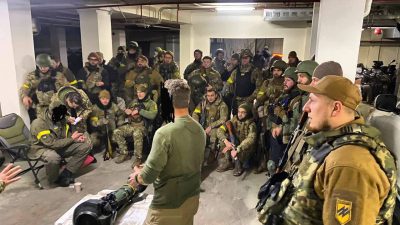 Today, the dangers of military escalation are beyond description.

What is now happening in Ukraine has serious geopolitical implications. It could lead us into a World War III Scenario.

It is important that a peace process be initiated with a view to preventing escalation.

Global Research does not support Russia’s invasion of Ukraine.

The history of this war must be understood.

The bombing and shelling led by Ukraine’s Armed Forces directed against the people of Donbass started eight years ago, resulting in the destruction of residential areas and more than 10,000 civilian casualties.

A  bilateral Peace Agreement is required.

The US-led NATO military alliance is sending weapons to neo-Nazi extremists in Ukraine as they battle Russian soldiers.

Since Russia invaded Ukraine on February 24, the US government has flooded the country with arms, authorizing sending $350 million worth of military equipment to Kiev.

In less than a week in late February and early March, the United States and other NATO member states transported more than 17,000 anti-tank weapons, including Javelin missiles, over the borders of Poland and Romania into Ukraine, the New York Times reported.

Western governments have invited hardened right-wing militants from around the world to travel to Ukraine to join the fight against Russia – just as they did in Afghanistan in the 1980s, in a strategy that gave birth to al-Qaeda and the Taliban.

Meanwhile, as NATO creates an insurgency in Ukraine, some of the fighters receiving these arms are white-supremacist fascists.

“The Azov regiment was the first to learn about new weaponry,” admitted NEXTA, a Western-backed Belarusian opposition outlet.

Canadian Media Is Happy to Risk Arming Neo-Nazis in Ukraine

The Azov movement was founded as a fascist gang that served as the muscle behind a violent US-sponsored coup in Ukraine in 2014, overthrowing a democratically elected government that had maintained political neutrality, and instead installing a pro-Western and viciously anti-Russian regime.

After the 2014 putsch, the Azov Battalion was officially incorporated into Ukraine’s National Guard. It is now known as the Azov Detachment or Azov Regiment, and helps oversee special operations.

Azov preaches a white-supremacist ideology that portrays Russians as “Asiatic” and Ukrainians and “pure” white people. It uses numerous neo-Nazi symbols, including the German wolfsangel and black sun.

Given Azov’s links to white-supremacist fascist groups in the United States, there was actually a short-lived campaign to get the Ukrainian neo-Nazi militia listed as a terrorist organization.

In 2019, Democratic New York Representative Max Rose and 39 more congressmembers wrote a letter to the State Department asking it to label Azov as a terrorist organization.

That designation never came. Instead, Washington and NATO have armed Azov to wage a proxy war on Russia.

The photos tweeted by NEXTA are far from the only piece of evidence showing that Western governments have supported Nazis in Ukraine.

In 2017, US and Canadian military officers met with Azov Nazis in Ukraine and advised them on how to battle Russian-speaking Ukrainian independence fighters in the eastern Donbas region.

Azov published photos of the meeting on its official website.

The Canadian military officials who met with these Ukrainian Nazis later feared being exposed by the media.

The Ottawa Citizen newspaper reported that the exposure of Canadian training for Azov fascists led to an official military review.

In 2018, mainstream news outlet Haaretz reported that a group of prominent human rights activists filed a petition with Israel’s High Court of Justice demanding that the country stop exporting weapons to Ukraine, after Azov posted a video on its official YouTube channel showing a far-right fighter using Israeli Tavor rifles.

Centuria is closely linked to Azov, and its extremist members have been photographed or filmed praising Nazi Germany and giving Hitler salutes.

These avowed neo-Nazis are now officers in the Ukrainian military, and were trained by the United States, Britain, France, Germany, Poland, and Canada.

As recently as April 2021, the group claimed that since its launch, members have participated in joint military exercises with France, the UK, Canada, the US, Germany, and Poland.

The US-led military alliance depicted the fascist extremists as brave anti-Russian heroes for fighting the former Soviet Union, while curiously overlooking their alliance with Adolf Hitler.

Featured image: Ukrainian neo-Nazis from Azov receiving NATO weapons and training; all images in this article are from Multipolarista