SOTN Editor’s Note: “After seeing these photos you may want to read this: A Russian particle beam weapon that destroyed the last two American Space Shuttles Columbia and Challenger … now info is coming out on Russian Space dominance. While our military and government were absorbing and saturating themselves in Operation Paperclip and creating mind-control black operations into the billions of dollars, the Russians dominated space.”  This quote was taken from an article that was obliquely explaining the “BLUE BEAM SPIRAL IN THE SKY” which appeared in the Norwegian night skies on December 9, 2009 (see photo below). 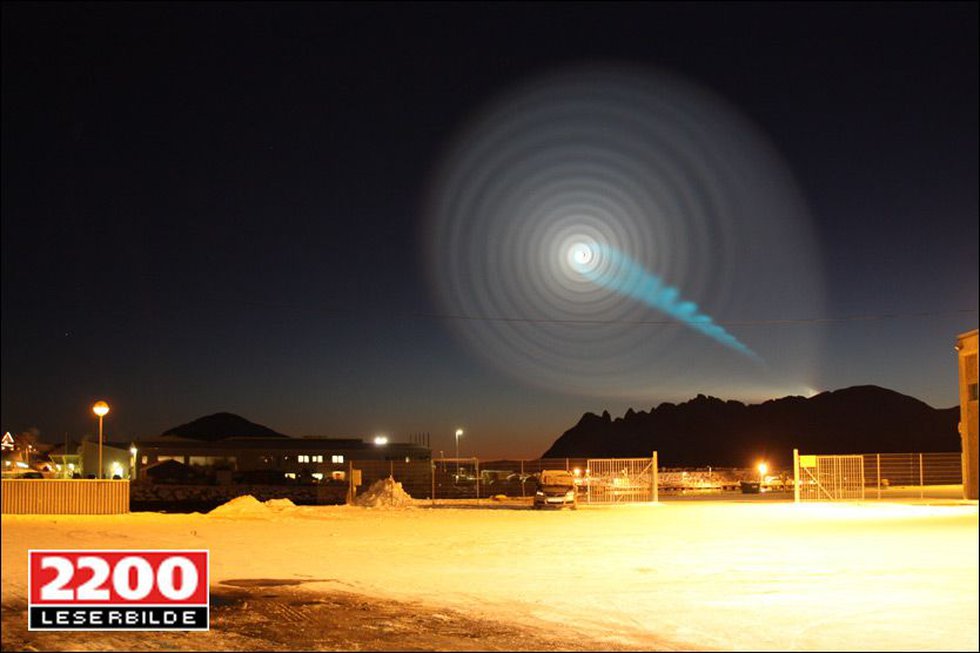 What follows is an insider’s understanding of how Russia maintains a HUGE superiority in space-based weaponry and satellite technologies.  Given that this retrospective analysis is decades old, the current state of the art in this highly impactive domain is surely light years ahead of the USA.

In February 1992, Russian President Boris Yeltsin proposed to the United States and the United Nations a global defense shield (with “Star Wars”-type weapons) BASED ON RUSSIAN TECHNOLOGY.

Some people might wonder what the “backward” Russians could possibly have that would be of value for the S.D.I. research and development program. The little-known TRUTH is that the Russians started deploying an OPERATIONAL “Star Wars” defense system in September 1977, and it has greatly grown and improved since that time.

In this article I will describe the Russian system as it developed from 1977 to 1983, and give several examples of how it was used during that period. But first I will try to convince readers of the credibility of my main source of information about it.

My main source is articles published in a weekly legislative newspaper, WISCONSIN REPORT (WR), of Brookfield, Wisconsin, (P.O. Box 45, zip 53005), written by the late Dr. Peter David Beter, a well-respected Washington, DC attorney, Doctor of Jurisprudence, and expert and consultant in international law, finance, and intelligence, who received much of his information from associates in the CIA and other intelligence groups of other countries who disapproved of many of the things happening or being planned behind the scenes.

They believed that at least limited public exposure might delay and ultimately prevent the worst of those things, such as NUCLEAR WAR and NATIONAL DICTATORSHIP, from taking place.

Dr. Beter started appearing on local radio and TV talk shows, but soon found himself being BANNED from them, as a result of government THREATS to cancel broadcast licenses.

So he started producing monthly one-hour cassette tapes and sending them to a growing list of subscribers. From June 21, 1975 until November 3, 1982 he recorded eighty “Dr. Beter Audio Letters” plus eight “Audio Books” and three special topic tapes. On September 1, 1977 Wisconsin Report started publishing transcripts of those tapes.

Based on information from his sources, Dr. Beter PREDICTED the bombing of the Marines in Beirut A FULL YEAR BEFORE IT HAPPENED, WARNING that the U.S. Pentagon and the Israeli Mossad were CONSPIRING TO DELIBERATELY ARRANGE IT in order to try to get Americans angry at the Arabs and generate public support for PLANNED military action against them. He reported the impending assassination of Anwar Saddat of Egypt SIX DAYS BEFORE IT HAPPENED.

And Dr. Beter predicted what he called the “retirement” of Leonid Brezhnev one week before Brezhnev officially “died” (note that the word “retirement” was used for the TERMINATION OF REPLICANTS in the 1982 movie “Blade Runner”), and his quick replacement with Andropov which occurred only three days after the “death” of Brezhnev, to the surprise of all government and media analysts.

By April 1978 there were about THREE DOZEN of them, and they had FINISHED DESTROYING all American spy and early warning satellites, (5-18-78 WR).

On September 27, 1977, in what Dr. Beter called “THE BATTLE OF THE HARVEST MOON”, a Cosmos Interceptor in Earth orbit used a NEUTRON-PARTICLE BEAM to wipe out a secret American laser-beam base nearing operational status in Copernicus Crater on the Moon, (11-3-77 WR).

The Russians quickly deployed their own military bases on the Moon, the second leg of their space triad, starting on October 4, 1977, with seven EXTREMELY POWERFUL charged-particle beam weapons BASES on the near side of the Moon and three support bases on the far side, (2-9-78 WR).

The first test of the Moon base weapons occurred on November 19, 1977, ironically at about the same time as the release of the first “Star Wars” movie with its “death star” weapon.

The Russians were aiming at the eye of a cyclone near India.

But they miscalculated the deflection of the beam by the Earth’s magnetic field, and the beam struck the ocean too close to the shore causing a TIDAL WAVE that killed many people, (2-9-78 WR). A blast of charged-particle beams from two or more of the Russian Moon bases fired in quick succession would create the DESTRUCTIVE EFFECT OF A HYDROGEN BOMB on its target.

The third leg of Russia’s triad of space weapons is the “COSMOSPHERES“.

The first-generation Cosmospheres were weapons platforms that were ELECTRO-GRAVITIC (could hover against gravity), ATOMIC POWERED, horizontally positioned by rocket thrusters, somehow invisible to radar beyond about 40 miles (perhaps from a radar-absorbing coating), armed with CHARGED-PARTICLE BEAM weapons (at least a hundred times less powerful than those in the Moon bases), equipped with “PSYCHO-ENERGETIC RANGE FINDING” (PRF) which tunes in to the actual ATOMIC SIGNATURE of a target or object and can NOT be jammed, and some of them were also armed with microwave BRAIN-SCRAMBLING equipment.

In late 1977 and early 1978, there was a strange rash of giant AIR BOOMS along the east coast of the United States and elsewhere.

These air booms were NEVER satisfactorily explained, by either the government, the scientific establishment, or the news media. They could NOT be positively identified with any particular Super Sonic Transport plane (SST) or other aircraft, and indeed they were MUCH LOUDER than aircraft sonic booms.

The giant airbooms were actually caused by Russian Cosmospheres firing CHARGED- PARTICLE BEAMS down into the atmosphere in a DEFOCUSED MODE (spread out) for the purpose of announcing their presence to the WAR-MONGERS in the United States Pentagon, (2-9-78 WR).

The main purpose of any “Star Wars” defense system is to protect a country against nuclear attack. During the weekend of January 20, 1980, Russian Cosmospheres accomplished such a mission.

A NUCLEAR FIRST STRIKE against Russia by the then BOLSHEVIK-CONTROLLED United States was being started with a total of 82 special secret aircraft that can sneak up to a country’s shoreline under water, surface, change configuration, take off, and fly at treetop level to their targets.

“At that point the real action got under way, in the Caspian Sea and off northern Norway. The Subcraft, with Israeli pilots, were on their way. They were traveling under water on the first legs of their attack missions….

“Late Saturday night, Washington time, a coded signal was flashed to the Subcraft to continue as planned. By that time, the northern contingent of Subcraft were in the White Sea. The southern contingent had reached the north end of the Caspian Sea. It was already daylight, Sunday morning, the 20th, for the Subcraft contingents.

Their orders were to wait out the day under water, out of sight; then, after nightfall, they were to continue their steady approach to get close to their targets. The Subcraft were maintaining strict radio silence.

They were also deep enough under water to be invisible from the air to either the eye or radar, yet they were also hugging the shoreline in water too shallow for Russian sonar to pick them up.

And their infrared signatures were negligible as the result of extensive development. In short, by the standards of Western technology, they were undetectable. But in AUDIO LETTER No. 42 I revealed Russia’s master secret weapon.

It is called “Psycho-energetic Range Finding” or PRF. It is unlike sonar and similar techniques. PRF tunes in to the actual atomic signature of a target, and there is no method known by which PRF can be jammed.

“By deploying their Navy to the Arabian Sea, the Russians are pretending to be fooled by the Bolshevik distraction with the aircraft carriers. In this way they encouraged the Bolsheviks to launch the Subcraft toward their targets. They waited until the Subcraft were far away from their bases and out of sight of the Bolsheviks, who are directing the American first-strike operation.

But the whole time they were being tracked by Cosmospheres overhead using PRF, and shortly after 1:00 A.M. yesterday morning Eastern Standard Time the Cosmospheres began firing their Charged Particle Beam Weapons.

There were 10 Subcraft in the White Sea. Each disappeared in a blinding blue white water spout of steam, smoke, and fire. In the north end of the Caspian there were 19 Subcraft – they, too, met the same fate.”

The 3rd-generation Russian JUMBO COSMOSPHERES were first deployed in April 1981, in parallel with the first U.S. Space Shuttle mission.

They significantly interfered with that MILITARY mission, in ways which were successfully covered up by NASA using techniques similar to those shown in the movie “Capricorn I“, (5-7-81, 5-14-81, and 5-21-81 WR).

Jumbo Cosmospheres are much larger than the 1st– generation models, and use ELECTROMAGNETIC PROPULSION instead of rocket thrusters to move around.

For about two years after Dr. Beter stopped recording his Audio Letters. In November 1982 (because of heart trouble), his distributor, Audio Books, Inc., published some newsletters titled “NewsALERT”, using information passed on to them by Dr. Beter or received directly from his sources.

Russia’s offer to share their “Star Wars” defense system with the rest of the world might also extend to SCIENTIFIC SPACE EXPLORATION. For example, the United States is planning to send two unmanned flyby and sample-return space missions to a comet. These missions would cost BILLIONS of dollars, take fifteen years from now to complete, and could FAIL in DOZENS of ways.

A Russian Jumbo Cosmosphere could complete a MANNED version of such a mission in a matter of MONTHS, if they have not already done so, since these Cosmospheres can accelerate continuously.

Note that the United States has announced a deal to purchase at least one SPACE REACTOR from Russia. Now you know what the Russians originally developed and used them for.