Huge chunks of ice falling from the sky in Florida Monday and over the weekend certainly caught people’s attention. Photos posted on social media showed that in some cases it resulted in some significant damage.

Hailstones pinged off the ground as thunderstorms blasted parts of South Florida on April 4.

A rare hailstorm blasted parts of South Florida Monday, coating the ground in white chunks of ice. Pings from the hailstones, which ranged from nuisance pea-sized hail to hail the size of golf balls, drew the attention of Floridians who live as far south as Miami.

The large hail caused significant damage to property in parts of Highlands County, which is to the north of Florida’s Lake Okeechobee. Photos on social media showed car windows with holes punctured by the hail, with the stones also causing roof damage to area homes.

Storm spotters reported hailstones as large as 2 inches in diameter, about equivalent to the size of a lime.

Hail and gusty winds were also reported as far south as Miami. Hail is generally rare across the Sunshine State, but especially as far to the south as it was observed Monday and over the weekend because the freezing layer of the atmosphere is higher up than in hail-laden places like the Great Plains.

“Large hail is rare in Florida because the atmosphere is too warm for it to form,” said AccuWeather Meteorologist and Senior Weather Editor Jesse Ferrell.

According to Ferrell, there have been just two other instances of hail larger or as large as the hail on Monday in Florida in the last five years.

Hailstones are formed when thunderstorm updrafts lift raindrops up into the frigid atmosphere, allowing them to freeze and gain mass. This process can happen repeatedly, allowing larger hailstones to form before the updraft is no longer strong enough to hold them up. 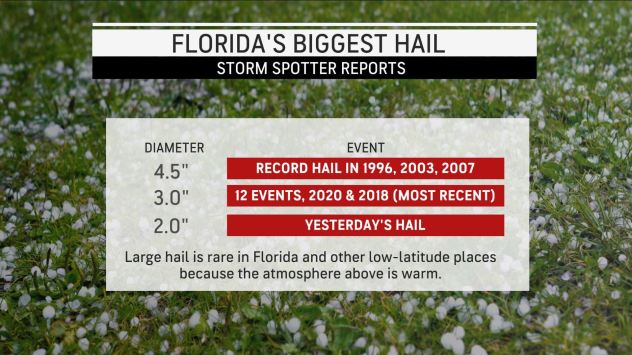 Large hailstorms can cause serious damage to property, with two separate hailstorms in 2021 exceeding $1 billion in damages, according to NOAA, and with AccuWeather estimating that a hail event in Texas topped $3 billion in damages. Hailstones can also cause injuries, but the risk of being killed by a hailstorm is low.

“Hail has to be really large to cause serious injury to people, or even death,” said AccuWeather Senior Meteorologist Dan Kottlowski. NOAA estimates that 24 people in the U.S. are injured each year, with some injuries significant enough to require hospitalization.