LOOK OUT, Folks! 2022 October Surprises have commenced in May…..

…and will continue right through this midterm
election cycle to the end of the year.  But why?

Because the Epic SCOTUS Abortion Ruling
Makes the Democrats Very Dangerous
Between Now and Election Day—That’s why! 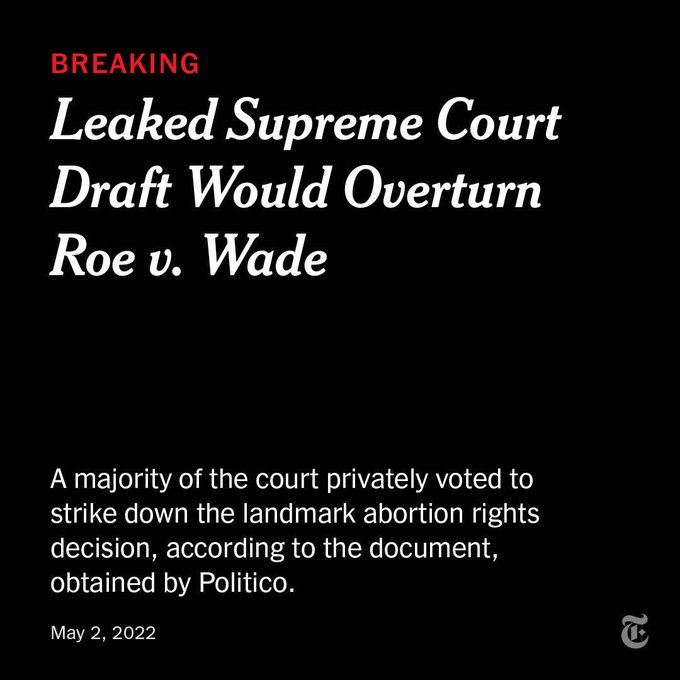 “The Democrat Party will simply not jeopardize
its repugnant “Infanticide Laws” which permit
the killing of newborn babies at 9 months.
Which is why we all just witnessed an October
Surprise in May—the unprecedented leak of
of the draft SCOTUS abortion opinion written
by Justice Samuel Alito.”

When the Democrat’s claim to political fame (read: infamy) is the passing of unconstitutional legislation that unlawfully legalizes the murder of a child at birth under the guise of an abortion, the stakes during the 2022 midterm elections could not be any higher.

The most malevolent demoncrats leading the Democrat Party today, who made that odious law their signature legislative issue, will not give up what they consider their hardest fought gain.  After all, so many ultra-liberal Democrat women voters see their newly enshrined license to knowingly and willfully execute a baby at birth as the most important right of their “Right to Choose”.

Talk about criminal wackadoodles of the highest order! Talk about wicked
whackjobs who think nothing of conspiring with their abortionist
doctor to outright kill a defenseless newborn infant!

The Democrat satanists worked long and hard to ‘codify’ ritual child sacrifice even though Roe v Wade never really came close to doing that.  Nonetheless, these inhumane butchers will do everything in their power to preserve a woman’s illegitimate right to exterminate her child.  They will stop at nothing between now and the midterms, even if it means stealing every election in sight like they did in 2020.  The Democrats don’t even care that the whole world is aware of the naked election theft that saw POTUS imposter Joe Biden installed in the White House.  They will repeat all of the same voter fraud and ballot scams that got their candidates illicitly elected during the last election cycle, if it’s the last thing they do.

BOTTOM LINE: Expect October Surprises to begin in earnest this month of May.  The Democrat Party only knows criminality and corruption to get their way, especially in this highly radioactive case.  Those wicked DEM politicians will carry out any crime spree, commit any series of heinous acts, perpetrate any criminal conspiracy and/or execute any felonious operation to prevent the US Supreme Court from overturning Roe v Wade.  Then they will use each and every October Surprise to shock and awe the American electorate to somehow push the undecideds into a voting posture favorable to the Left.  The mainstream media will then falsely portray the tide turning in favor of the Democrats, as they do every election year.  Fake polls will be published, one after another, which will then be used by the fake pollsters who will swoon over the sea change favoring Democrat candidates.  Irrespective of an often comatose and universally detested Joe Biden, the talking heads will spin his lowest rating in US presidential history as a real boon to his party’s election prospects.

Just as the ludicrous COVID CON was cooked up in the bowels of the Democrat National Committee headquarters as a means of manufacturing so much chaos, confusion and conflict during the last year of the 202o election cycle in order to steal the POTUS ballot, the same perps will attempt a similar scheme this year.

The Democrats only hope is to steal as many seats in the House necessary to keep their majority during an election season that has never been so dismal for the Left.  Likewise, the DNC will execute the same criminal vote-rigging operations to secure a supermajority in the Senate; for only in this way can the Democrats hope to pass legislation to codify abortion protections as they just tried to achieve with yesterday’s failed bill.

Hence, the communist-controlled Democrat Party will use the next 6 months to carry out any and every October Surprise necessary to use as cover to commit their biennial election thefts.  Not only will COVID-19 predictably rear its ugly head with a vengeance, the bioterrorists may even roll out a whole new Plandemic as the biowar frontman Bill Gates has been deceitfully preparing US for.

However, because of what’s truly at stake for the DEMs, they certainly have plans to shock and awe the entire American electorate as never before.  Therefore, expect a HUGE October Surprise to come to a theater near you.  False flag operations using juvenile crisis actors egged on by CIA-contracted drama queens strategically positioned throughout the CIA’s Mockingbird Media can be easily conducted in any city or county in America.

KEY POINTS: The Democrat Party knows that the single best way to galvanize the base in 2022 is to light the biggest fire in American electoral history.  They falsely believed that leaking the draft abortion opinion will get the vote out, but those ultra-libs were already sure cast their ballot, and multiple ones at that.  Which means that the leftist pollsters and politicos grossly miscalculated as there are many old-fashioned Democrats who are absolutely horrified by the various “infanticide via abortion” laws passed only in the blue states.  Therefore, their first October Surprise will not only fail them woefully, it will likely backfire with overwhelming consequences.

The Armchair Political Analyst
State of the Nation
May 9, 2022