Because Team Biden and the Democrat Party
desperately need a race war to break out across
America before the upcoming midterm elections—THAT’S WHY!

Really, since when does the MSM refer to these mass shooting as “race attacks” before any investigation has even been started? 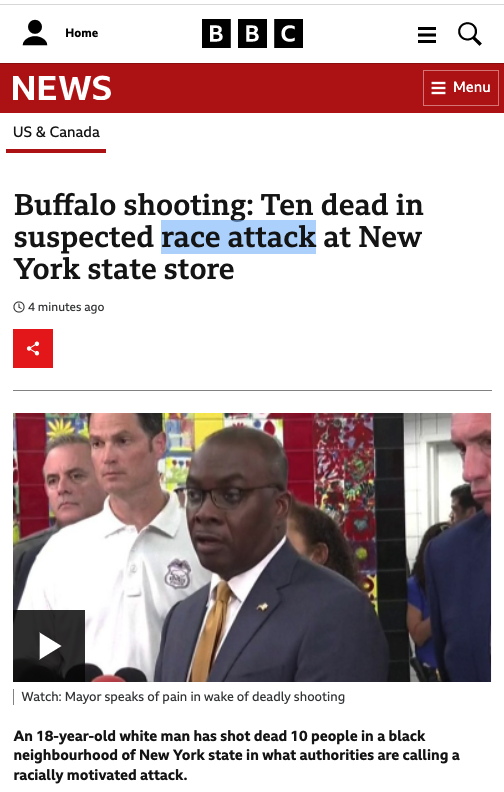 The Google search result is already full of headlines with “race attack”.   Does the language get any more inflammatory or provocative than “race attack”? 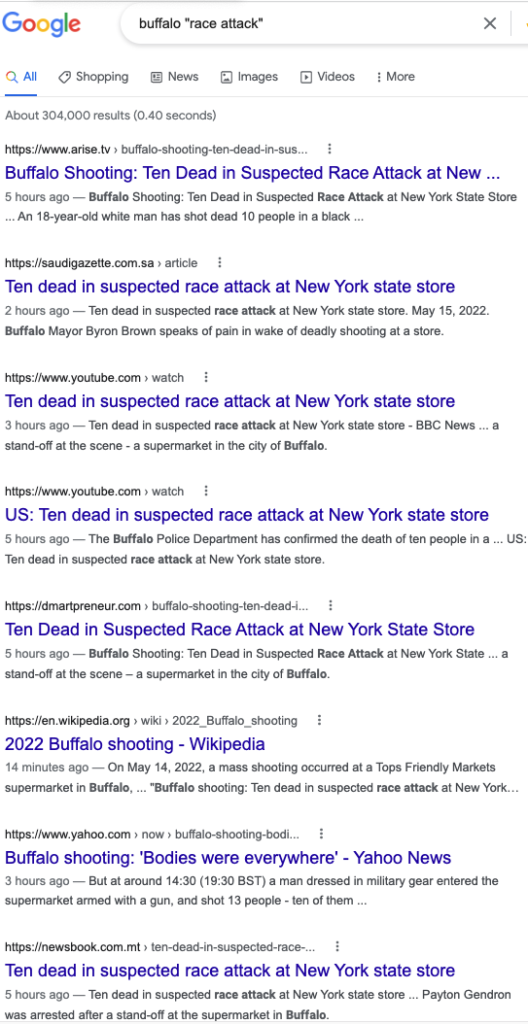 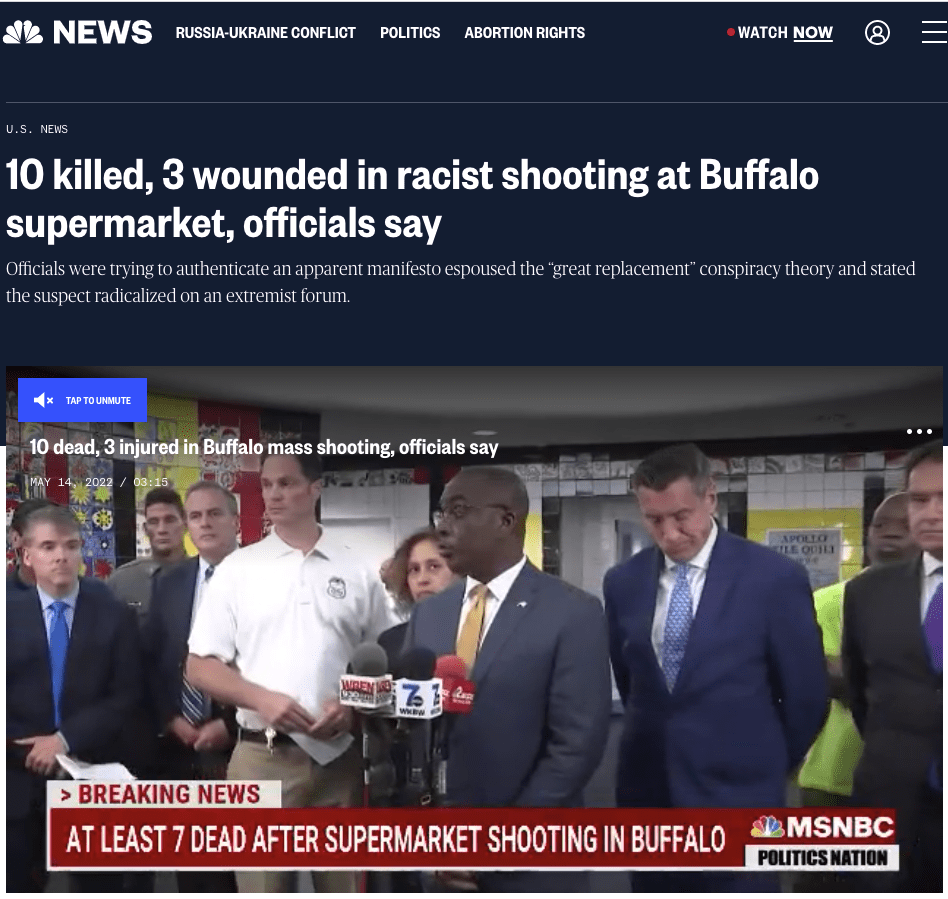 Any news story that makes it to the very top of Google [HEADLINE] News is exactly what The Powers That Be want us all to be distracted by. 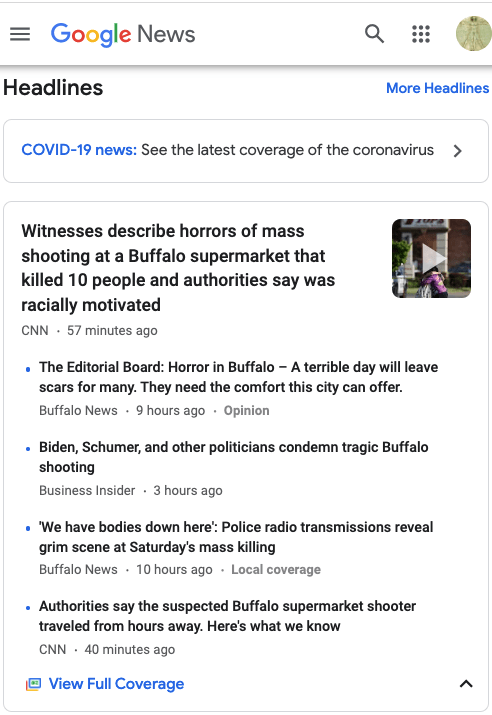 First, to sow seeds of chaos and conflict in advance of Election Day by inflaming racial tensions nationwide.  The more pandemonium and confusion between now and Tuesday, November 8, 2022, the easier it will be for the DEMs to steal every election in sight.  Not only that, but the liberal establishment wants to drive voters away from conservative candidates in all 50 states—FOREVER.

Secondly, this government-directed black op was carried out to further advance draconian legislation, a stealth bill which is already written and waiting to be submitted to the New York State legislature, in order to effectively terminate the Second Amendment by that communist-run government.  The power elite domiciled in the greater New York City metro region will not tolerate an armed citizenry after the FED triggers a market crash(es), and especially in the wake of a collapse of the New York Stock Exchange.

Thirdly, to fabricate a HUGE distraction to sufficiently divert the electorate’s attention from the grotesque $40 billion military aid package to Nazi Ukraine.  When people wake up to the fact that Ukrainian President Volodymyr Zelensky is being cunningly set up as the Adolph Hitler of the 21st century, they will vociferously protest all this outright theft of taxpayer money to fund a Nazi Regime…especially when skyrocketing inflation is bankrupting families across America.

Fourth, the Soros financially-manipulated Left is forever on a mission to completely demonize the Right.  That’s why the mainstream media always hypes stories that falsely play into the ‘racist’ Right while ignoring the many mass shootings perpetrated by left-wing nutjobs such as the Congressional baseball shooting that almost saw the House Majority Whip killed—Steve Scalise.

Fifth, and no less impactful that the preceding four, this act of naked chicanery provides the communist politicians in New York State and across the USA to call for drastic censorship of the social media.  It may even be that Elon Musk’s takeover of Twitter triggered this whole operation as a preemptive strategy to keep his constitutional brand of free speech off the largest social networks. See: New York Governor calls for even more social media censorship due to Buffalo mass shooting

There are other NWO globalist objectives behind this obvious Gladio terrorist operation, all of which will become more apparent as we get further away in time from the crime scene.

KEY POINTS: It could even be that this transparent false flag operation is a complete hoax as many of these MCEs are executed by CIA-trained crisis actors and then immediately covered up by FBI-coordinated fake law enforcement officers.  Or, this could be a hybrid black operation with some gripping reality blended with a carefully staged hoax.  Only time will tell as the facts become known or they are strenuously covered up by both the corporate media and all levels of law enforcement. See: Buffalo Mass Shooting Exposed as Another Obvious CIA-Staged False Flag Operation

The Twitch livestream video of the Buffalo mass shooting supposedly uploaded by the alleged killer himself seems to prove that this false flag operation is a hoax from start to finish.  The entire video has the same feel that the utterly fake New Zealand mosque mass shooting had, and that was conclusively proven to be a fraudulent production.  Here’s the video that has since been removed by Twitch: Original Livestream Video of Buffalo NY False Flag Mass Shooting Hoax