It’s Getting Worse… The Pernicious Creep of Censorship and Tyranny 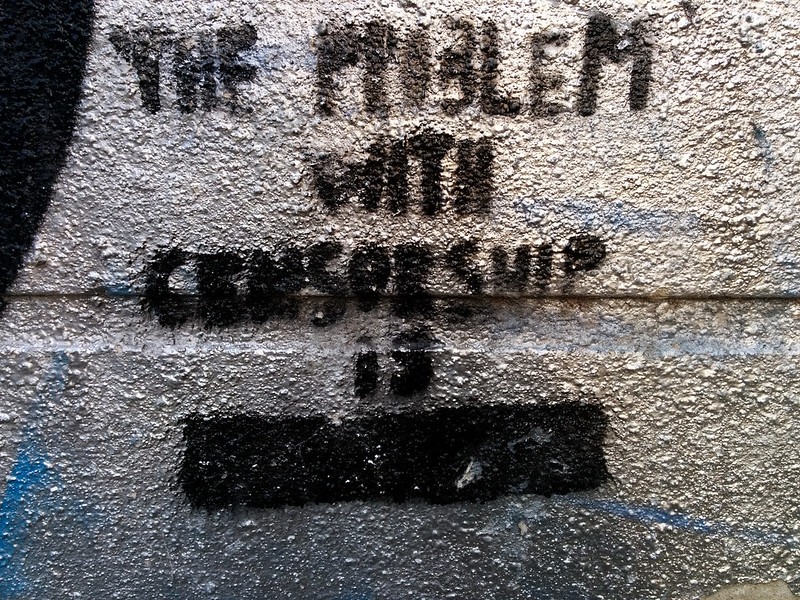 My country is imperiled like never before seen in my 65-year lifetime.  Half or more of the voting-age population has been labeled as domestic terrorists.  Peaceful protesters who did nothing more than enter a public building on a day when the Senate was in session have been held since January and kept in solitary confinement, in most cases, for no more than trespassing.  I do not know about you, but I saw no signs inside or outside the capitol that day that said No Trespassing,  or No Admittance…Special Session in Progress.  Hasn’t our Capitol always had public access?  Now I am aware that the signage that said Restricted Entry was intentionally removed.  This was caught on camera.

Leading up to the election in November 2020, the “mainstream” media banned coverage of stories that reflected negatively on Biden, especially those regarding his corrupt son, Hunter, and his corrupt dealings internationally that netted the Biden clan tens of millions.  Even when a very credible witness came forward who had met personally with Joe and Hunter Biden to discuss a role they hired him to perform managing Chinese money…crickets from the mainstream media.  The witness knew this business transaction compromised the senior Biden’s integrity, and he asked Biden’s brother about it.

“Plausible deniability” he was told would protect Joe.

Immediately after the election and January 6th protest at the Capitol, Twitter banned Trump from communicating with his eighty plus million followers.  Following this lead, Facebook, Instagram and other communication “platforms” began “canceling” conservative Americans as well as deleting posts of anyone who questioned the handling of the election and/or its results.

Powell, Giuliani, and Lindell made valiant efforts to expose the election irregularities, and fraud, but their efforts were thwarted by Big Tech AND our legal system, all the way up to the Supreme Court who ruled Trump and Texas along with many other red states did not have “Standing” in their suits to contest the fact that states did not follow their own laws in the conduct of the November 2020 election.  This complicity by the judicial system managed to squelch the evidence of fraud and malfeasance because the legal cases were simply not heard.  The left’s claims of NO EVIDENCE of widespread fraud are based on a vacuum of specifics because our legal system failed the American people.

Dominion sued Powell, Giuliani, and Lindell for billions, making the stakes so high that only Lindell was willing to continue the fight.  Look up the origins of Dominion as a player in the US’ voting systems market during the early years of the Obama Administration to see how Eric Holder and Robert Mueller were key in giving the company unfettered access to US markets and technology from other voting systems companies.

The Arizona Senate, through Cyber Ninja’s audit, presented their results as broadcast on Newsmax and/or OANN.  Giuliani first presented the evidence of fraud to the Arizona Senate which ordered this forensic audit. By analyzing envelopes that were turned over by the Elections Officials after many months of foot-dragging and subpoenas, Cyber Ninja’s demonstrated that the electoral votes of AZ should not have been attributed to either candidate because the extent of illegal ballots far exceeded the margin of victory.

Zuckerbucks may have accounted for our Secretaries of State and key election officials’ willingness to look the other way when obvious violations of election law took place under their noses, like physically ejecting the poll watchers, putting cardboard over windows to prevent viewing of the counting, and pulling ballots in suitcases out from under a cloth draped table, and feeding them through the voting system’s scanners multiple times.  The latter was caught on a security videotape in Georgia, but “Nothing to see here.” and “Just people doing their jobs.” were all we heard from those responsible for running the election.

Then it was vaccines.  Even biotechnology experts were censored and banned if they did not tout the party line about vaccines.  Rand Paul has bravely exposed Fauci for his role in funding the research lab in Wuhan that engineered the Covid virus.  My understanding of events is that the Scripps Institute virologist who wrote to Fauci at the onset of the pandemic and told him the virus looked “engineered” back in late 2020 changed his mind and then received a big grant to fund his future research.  It is my belief that the USA funded this research in China after it was banned by the Obama administration because it wanted to remain the premier player in all types of warfare, including bio-weapons.  Doing it in China at the Wuhan Lab means we agreed to share the results of this research with the CCP.

Now censorship abets Biden after his Afghanistan exit fiasco.  Disrespect Biden and you are gone, even if you are a grieving Gold Star mother.  Ask for accountability if you are a military officer and you are relieved of your command.  Leave no man behind has always been the mantra of our military.  Biden, as Commander in Chief, professed to be adhering to that long-time tradition several times in speeches he made in the final week in Kabul.  We are now supposed to believe the talking point that this was the most extensive and successful airlift in history even though we left hundreds of Americans and allies behind, with 13 of our servicemen and women paying the ultimate sacrifice.

It is no wonder that the members of the Senate and House who served in our military are outraged, and they are seeking to impeach Biden for this shameful, dangerous and unnecessary rushed evacuation, and the lies he told to the American people concerning the Afghan army’s ability to fend for itself in staving off the Taliban takeover.  We know Biden was lying and not just misinformed due to a recently leaked transcript of a conversation he had with Ghani, Afghanistan’s now exiled President.  Biden told Ghani that in spite of the imminent takeover of his country by the Pakistan-assisted Taliban, Ghani must present a facade and make it seem otherwise.

I have noticed that censorship is also occurring through my internet searches.  When I looked for stories back in January 2020…stories that I had previously heard about concerning vote flipping in Michigan in Antrim County… they were not to be easily found, or perhaps they were buried under dozens of other “hits.” I began using Duck Duck Go as a search engine to find what I wanted and to prevent, hopefully, being tracked and labeled as a “domestic terrorist” for my interests and beliefs as evidenced by my internet searches.

I hold a BA in mathematics from U.C. Berkeley, and I have studied statistics and logic.  I understand that there is such a thing as mathematical proof of election tampering and fraud.  In the absence of complete forensic audit results, in multiple states, this statistical evidence, and our own personal experiences of people who voted multiple times, or people receiving ballots for others in addition to themselves,  is what we have on which to formulate our assessments at this point.  We all recall the spike in votes for Biden in Pennsylvania that took place after the election system paused to recalculate.  A son-in-law says that this was explained by mainstream media as simply reflective of the aggregation of votes for Biden.  If you aggregate Biden votes, you necessarily aggregate Trump votes through disaggregation.  Where were the Trump spikes that necessarily needed to follow the Biden spikes?

My local papers both rejected my article, Remembering 9/11, Kabul/Freedom of Speech.  I was previously blacklisted by the Journal when I wrote an article in the summer of 2020 called Tyranny at Sugarpine describing how I had gone camping there, only to get ejected from the campground for not having a reservation when the website, recreation.gov, indicated there were first-come, first-served sites still available, and the signpost on the site I picked said it was free on the date I was there with my two friends.

The campground host called the Sheriff when I refused to leave. I said I’d go if shown the federal government’s edict regarding Forest Service campgrounds, or the CDC guidance, that said that USFS campgrounds could no longer accept first-come, first-served campers.  I left when told I would be arrested and my car towed.  I had read there was a COVID outbreak at my local jail. I may have been blacklisted by my local paper because a red circle appears now when I attempt to submit anything to the paper.

The censorship we face at all levels stems from Twitter’s initial banning of Trump back in January of 2021.  I believe this act had to be coordinated by the incoming administration, as was the appearance of approximately 20,000 National Guard surrounding the Capitol immediately after 1-6-2021.  Trump was still the sitting President, so I see this act was, in fact, a coup.  It is ironic that the Capitol protesters on 1-6-2021 were labeled as insurrectionists who were attempting to mount a coup.

We have seen further evidence of the collaboration with Facebook offering to filter the information related to the COVID vaccines. “The land of the free and the home of the brave” is not so free anymore.  A Disinformation Governance Board will soon tell us what to believe and remove anything that does not fit the Biden narrative from our view.  Pelosi’s partisan commission has requested that ATT provide the text, not just the meta-data, of all the e-mails between over a dozen people close to Trump, and Trump.  In March 2022, ATT dropped OANN from the company’s Direct TV service. This network’s suppression, and possible demise, appear to be the direct result of reporting on election irregularities and fraud, and willingness to be critical of the Biden administration and its policies.

Biden’s lackeys in the judiciary and in intelligence agencies recently succeeded in getting hold of Trump’s tax returns.  As a very wealthy individual, Trump was constantly under audit, and no issues have yet surfaced. The basic tenets of our constitution are being ignored by the lawless cabal in charge of the House, Senate, and Presidency as well as by our FBI, CIA, Big Tech., the judiciary, and soon, or perhaps already, the IRS.

Our military capitulated in Kabul, relinquishing the long history of honor to which our previous military leaders adhered. Whose orders were they following?  Our Generals indicated they gave different advice than the plan or lack thereof, Biden implemented. I am not just appalled, but endangered, along with my countrymen, and our world, by our failure to execute a plan to keep ISIS prisoners secured.

So in spite of these horrific events and injustices, we slog along and try to live our lives, and hope for the best in the 2022 midterms.  Truth Social, Trump’s media company, is beginning to take hold.  Elon Musk may acquire Twitter and restore this platform as a place for Conservatives to present their beliefs and interpret world events.

Newsom’s recall election indicated that California is beyond hope. Of note was the number of ballots being sent per household in my neighborhood.  Many were provided in the 2020 and Recall Elections.  Now, the correct number arrived at my house for the June 7, 2022 Primary.

Apparently, we will soon be the abortion capital of America. So where do freedom-loving Americans go from here?

Jennifer Mitchell Towner worked in the computer industry from 1979 to 1998. Under a program called Encorps, she became a high school math, French, and Consumer Finance teacher in 2009, retiring in 2019. She holds two BAs from U.C. Berkeley in Math and French and an MBA from Stanford University. The books she published in 2021, Good Boots and Kipper the Nipper are on Amazon.