This is how every British prime minister is set up: his handlers tell him he can break the rules, and then when he does his globalist masters forever manipulate him to carry out the NWO agenda.

UK PM responds to calls to step down 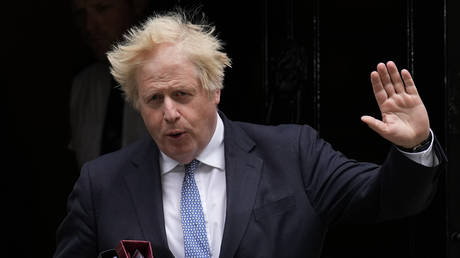 British Prime Minister Boris Johnson said on Wednesday that he takes “full responsibility” for more than a dozen parties held at Downing Street and Whitehall as Britain was under coronavirus restrictions. However, the PM rejected calls from the opposition to step down, and said that he wants to “move on” from the ‘Partygate’ scandal.

Earlier, a long-awaited report blamed “failures of leadership and judgement” at Johnson’s office for allowing the parties to take place. Senior civil servant Sue Gray investigated 16 gatherings that took place at government buildings during Britain’s nationwide lockdowns of 2020 and early 2021, and concluded that “many of these events should not have been allowed to happen.”

Johnson, who was photographed attending several of these events, must “bear responsibility for this culture,” the report added.

Emails from Johnson’s staffers mentioned “drunkenness” at one event that the PM attended virtually in December 2020, while members of staff “drank excessively” at another gathering three days later at the prime minister’s residence. At the time of the “crowded and noisy” party, ordinary Britons were confined to their homes and restrictions on gatherings of more than two people were in place in London.

“I take full responsibility for everything that took place on my watch,” Johnson told Parliament on Wednesday. While Johnson insisted that his “attendance at these moments, brief as it was, has not been found to be outside the rules,” he said that “clearly this was not the case” as some events went on long into the night after he had left.

Labour Party leader Keir Starmer – who himself is being investigated for drinking with staff during lockdown in 2021 – described the report as a “catalog of criminality,” and urged Johnson to “do the decent thing and step down.”

Amid condemnation from Labour, some of his own MPs, and calls to resign from the SNP’s Ian Blackford, Johnson said that he was “humbled” by the investigation, but wants to “move on” and stay in power.

Aside from being blamed in Gray’s report, Johnson has also been fined £50 ($62) for attending a surprise birthday party thrown for him in June 2020. Altogether, London Metropolitan Police have issued more than 100 fines to officials who attended the parties mentioned in the report.