“The Courage to Face COVID-19”: Preventing Hospitalization and Death While Battling the Bio-Pharmaceutical Complex

Review of the book authored by John Leake & Peter A McCullough, MD. MPH 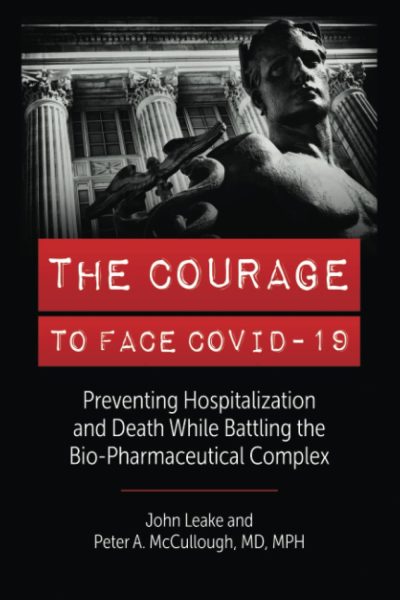 John Leake is a best-selling an “experienced non-fiction, true crime author”. Having just read what must be described as an extraordinary ‘telling’ of the COVID-19 saga, this book is the narration of true crime on a scale that could top the list in the history of ‘man’s inhumanity to man’.

The book chronicles the unique role of national governments across the world and their health agencies, led by the USA and WHO, which followed an agenda that led to completely avoidable fatalities numbering several million. The question is why?

The usual culprits are money and power. But to ascribe cause to these two is woefully insufficient. The sheer magnitude of the ‘dark agenda’ –  coordinated and played out by governments, health agencies, the medical establishment (hospitals, doctors and chemists) and the massive and deliberate disinformation by the legacy media – defies such easy explanations. As one journalist on Leake’s team put it, “but this is evil”.

Dr. Peter McCullough says it will take a legion of investigators and investigative journalists to “untangle and delineate what would ultimately be revealed as a massive crime against humanity”.

This book is in part that investigation, zeroing in on why treatment protocols (especially early treatment) were side-lined, leading to disastrous consequences. The book is an impressive, accurate and lucid telling of this crime on a global scale, with its lens on the USA.

John Leake could not have wished for a more authoritative voice than Peter McCullough, his co-author. McCullough, a practising board certified internist and cardiologist, is the most published author in history in the field of cardio-renal medicine.

By 2020, he had published over 60 peer reviewed academic medical papers. In addition to his medical doctorate, McCullough has been awarded eight medical certifications from various societies. He is now a published leading expert in treatment protocols, particularly early treatment for COVID-19.

The ‘McCullough Protocol’, which has evolved over 22 months, has helped treat millions of patients worldwide, saving countless numbers of people from hospitalisation and death. Because ‘the battle’ is being fought on the grounds of medical authority, only medical doctors of the unique calibre and expertise of someone like Dr. Peter McCullough are in a position to take up the cudgels.

McCullough also has the vital qualities of integrity and courage that allow him to take on this vastly unequal fight against the bio-pharmaceutical complex that includes the US government and its health agencies (the FDA, CDC, NIAID) and the WHO.

The book sets out the timeline of the ‘pandemic’. The WHO declared COVID-19 a pandemic on 11 March 2020, using a highly inaccurate and faulty RT-PCR at high CTs (cycle thresholds) above 40. Those who tested positive and had no symptoms were labelled ‘asymptomatic’, a new category of COVID patients that ratcheted-up the numbers required for declaring a pandemic.

Dr Fauci (assuming the mantle of the US’s chief public health officer) declared on 16 March 2020 that his institute the NIAID (National Institute of Allergy and Infectious Diseases at the US National Institutes of Health – NIH), had developed a promising vaccine to combat SARS-COV-2 at a substantial investment. This was promoted as humanity’s only hope.

Fauci forgot to mention that the NIH co-owned the patent. This was ‘warp speed’ indeed.

Interestingly, during a simulation at Event 201 on 28 October 2019, it was stated that CEPI (the Coalition of Epidemic Preparedness Innovation) was already working on a corona virus vaccine, the first step of its business plan (BP) published in November 2016. CEPI was launched in January 2017 in Davos by the Gates Foundation, the WEF, the governments of Norway, Japan, and India and the Wellcome Trust.

The book notes that treating COVID-19 with existing drugs was not part of the BP. That is why there was no interest in re-purposed drugs like hydroxychloroquine (HCQ), which had been approved since 1955 by the FDA as a malaria prophylaxis. Billions of doses had been administered over the decades. The drug is safe, cheap and easy to manufacture.

Research teams in China were reporting favourable results for treating COVID-19. McCullough says, “the only thing in the literature is HCQ. We should take the Indian medical Council’s (ICMR) recommendation to use it”.

The other re-purposed drug that has been successful in treating COVID-19 as a prophylactic and at every stage of the disease is the anti-parasitic drug ivermectin. It would be hard to overstate the significance of the effectiveness of ivermectin: it is an inhibitor of SARS-COV-2 in vitro. A single treatment effected “approximately 5000-fold reduction in virus at 48 h in cell cull culture” (Study by Monash University of Australia).

Ivermectin is FDA approved and like HCQ is widely available, off-patent and inexpensive. It is on the WHO model list of essential medicines. Since its discovery in 1989, ivermectin has cured two great scourges (river blindness and elephantiasis) and has been widely prescribed.  Like HCQ, ivermectin is hugely effective at mitigating COVID-19 disease and death.

Both drugs are derived from natural sources. HCQ (natural ancestor, quinine) is derived from the cinchona bark (discovered by the Quechua of Peru) and ivermectin is a bioactive compound derived from a soil bacterium (Streptomyces avermectinius). Its discoverer Satoshi Omura and his colleague at the Merck Institute Dr William Campbell won the Nobel Prize in Medicine for ivermectin in 2015.

In 2017, the report from The Journal of Antibiotics reported: “enigmatic multifaceted ‘wonder drug’ continues to surprise and exceed expectations”. The journal presented ivermectin’s therapeutic properties against an array of pathogens, including viruses.

Both HCQ and ivermectin should be of star value for India because they fit in so well with her 5,000 year history of medicinal plant science in Ayurvedic healing traditions. Both were used to great effect for treating COVID-19, especially in UP (Uttar Pradesh). Unfortunately, despite the data, the Indian government and WHO withdrew support for it.

The authors note that the impressive evidence that both drugs were effective treatments for the virus was stonewalled by Fauci and the CDC and met with a wall of silence by the legacy media. Inexplicably, remdesivir was the only drug authorised and made available in US public hospitals; a drug without a safety profile and which could be fatally toxic, leading to kidney failure.

Furthermore, compared to the price at ‘pennies’ of HCQ and ivermectin, remdesivir was priced at over $3,000 per treatment, but took a mere $10 to produce! The message from Gates was: “there is no treatment apart from remdesivir. Stay home — wait for the vaccine”.

Readers are informed that health agencies told the medical profession that nothing could be done to treat COVID-19, backed by the press that emblazoned this therapeutic nihilism. A panicked public was denied any form of treatment – wait till your lips are blue and then go to the hospital. Patients were isolated and alone, no relatives were allowed to visit.

When they reached the point where they could not breathe, they were put on mechanical ventilators, a death knell: 80% died. Ivermectin was resolutely and tyrannically denied – even when there was no hope that the patient would survive and against the pleading of husbands, wives, parents.

Incredibly, even court orders were flouted. In the few instances where hospital doctors were explicitly ordered to stand aside and let a protocol of ivermectin be administered, such patients recovered and fast. The others? They died.

In Texas alone, 45,000 died. Peter McCullough estimates around 70% of COVID-19 fatalities could have been prevented. By Christmas 2021, that figure was 610,000 preventable deaths. He said, “there is so much focus on the vaccine, where is the focus on people sick right now”.

The proven solutions to the virus in HCQ, ivermectin and other drugs, (methylprednisolone, heparin, azithromycin, zinc and orthomolecular medicine, specifically high dose vitamin C), proved that this was a most treatable virus,  or as Prof Didier Raoult pronounced – game over!

Despite this, experimental (unapproved and untested) vaccines were rolled out at warp speed under Emergency Use Authorisation (EUA). The explicit legal, statutory requirement is that there must be no adequate, approved and available alternatives.

Herein lies the authors’ tale of horror and fraud, with profits of trillions of dollars for vaccine manufacturers, (who are also indemnified from causing harm), through an official policy of a needle in every arm.

At the same time, various monetary incentives came into play to boost COVID patient numbers via a hastily drafted CARES Act (Corona Virus Aid, Relief and Economic Security). Medicare has determined a COVID-19 admission to hospital will entitle the establishment a payment of $13,000. If that patient goes on a ventilator, the payment is threefold or $ 39,000!

It is also acceptable to report COVID-19 on a death certificate as “probable” or “presumed” where a definite diagnosis cannot be made. From November 2020, hospitals also got an additional 20% add-on payment when a prescribed government drug was used – remdesivir.

The book also sets out a conflict of interest so colossal that it defies credulity.

The Gates and Fauci partnership, (with the Wellcome Trust) controls around 57% of global bio-medical research funding. The Gates foundation is invested in virtually every vaccine and also controls much of the mass media. Excluding contractual payments to the news media, in 2020, the Gates Foundation grants were of the order of $250 million. The full scope of its funding is unknown. This explains the slander, the massive disinformation and fake news.

An intrepid battalion of medical warriors like Dr. Peter McCullough has refused to kowtow to the raging medical tyranny.  The pandemic has demonstrated that the light of consciousness has dimmed globally. Yet “we live in order to become conscious” (CG Jung).

Doctors and medical scientists of immeasurable stature were junked, their careers ‘cancelled’ for safeguarding our medical freedom. If we should lose our medical freedom, we lose every freedom. These scientists have prevailed, however, and have thrown a lifeline to millions through early treatment protocols. This book is about them.

In finishing, it is worth noting that we now have evidence – and it is growing – that EUA vaccines, which have been mandated by governments, the WHO and private industry, are associated with increased risk of disease and death from COVID-19. By July 2021, the CDC VAERS system recorded 6,207 deaths (quoted by Leake).

Aruna Rodrigues is Lead Petitioner in the PIL in the Supreme Court of India for a moratorium on GMOs since 2005. She is also part of a dedicated group of researchers into COVID-19, its policies, vaccines and health impacts (arunarod@gmail.com).

Featured image is from Amazon