If this massive human trafficking operation is going on in Polk County Florida, then every county in the USA must have similar vast criminal networks!

Yesterday, Polk County Sheriff Grady Judd announced the results of a sting operation arresting ONE HUNDRED AND SIXTY people for human trafficking, including several public school teachers and at least one Disney employee. 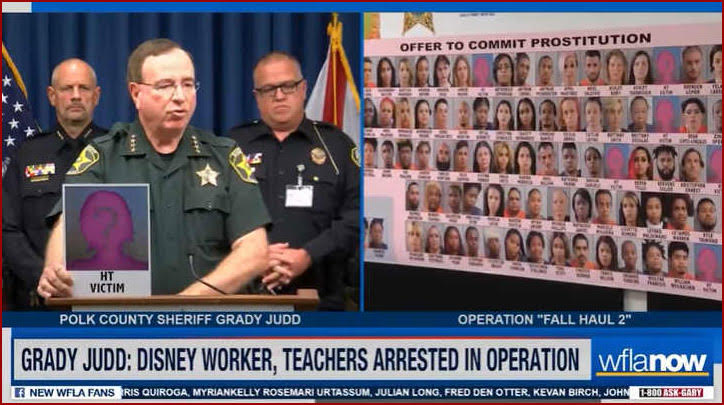 Some of the arrestees were prostitutes, which Judd said he also considers victims. When arrested, Judd said that the department also immediately refers those arrested victims — the prostitutes — to social services. He explained that many of these ladies are victimized by traffickers:

“…folks, the overwhelming majority of these ladies are, or have been in the past, taken advantage of. You know, they used to call them, ‘oh he’s the one who provides for me, he’s the one that gives me a ride,’ but what we’ve found is many, many, many times, that in fact, this person is trafficking this lady. He’s making a profit off of her. He is controlling her very life.”

We ALWAYS have Disney employees. Gosh. If I were a “family-friendly” entertainment giant, I wouldn’t want law enforcement talking about me that way. I’m just saying. That’s not good for business