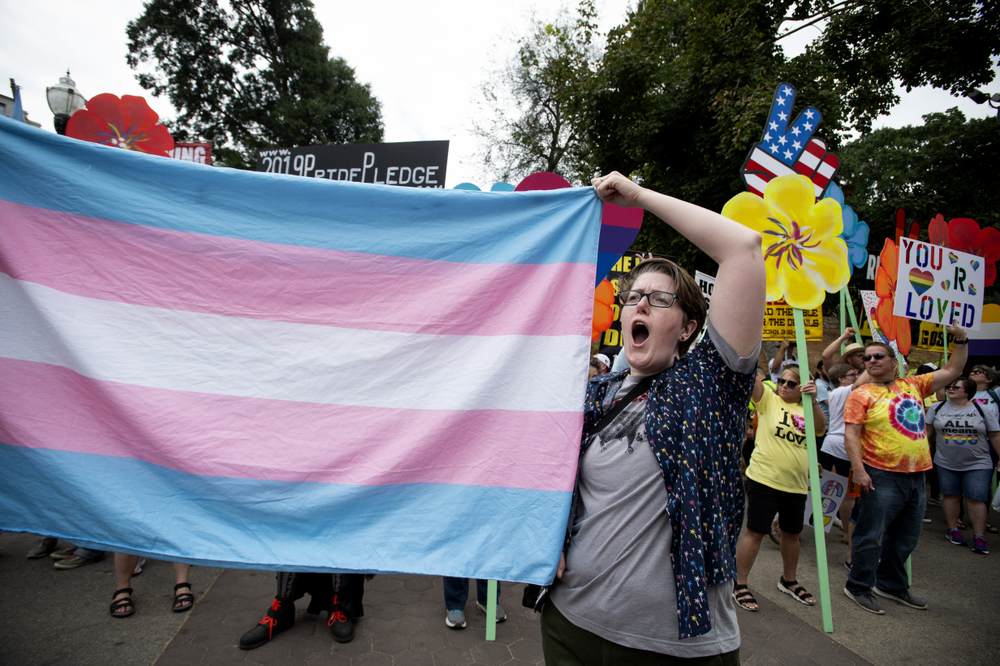 We look back on the primitive people of the past and sneer at their bizarre and monstrous atrocities – and rightly so. Even the civilized Romans recorded horrible acts by their elite – Emperor Elagabalus allegedly wanted to castrate himself and do some more cutting in order to become a Romanette, while Nero sliced the bologna off his boyfriend, a kid who was unlucky enough to resemble Nero’s dead wife. But here’s the thing – the Romans themselves wrote about this stuff recognizing that it was an atrocity. The Romans at least has a bit of moral clarity. But our savage elite celebrates the surgical disfigurement of disordered people, including kids. Our senile president sits with a male pretending to be a girl and cheers it on. Mutilation is a disgrace and it must stop.

Yeah, the word is “mutilation.” Chopping of penises and testicles, cutting off healthy breasts, trying to sculpt obscene parodies of male and female sex organs – these are mutilations. The Aztecs, no slouch in the atrocity department, would look at this in disgust.

“Top surgery,” “bottom surgery” – they know it is all an abomination because they try to hide double mastectomies and castration behind benign euphemisms like “gender affirming care.” It’s a lie wrapped up inside a deception. And our garbage ruling class think this is a good thing.

But then, when exposed – after they call you a terrorist for letting people know about the horrors they are inflicting on sick and vulnerable people – they shift into, “It’s actually a good thing, this thing we were denying doing just a couple minutes ago.”

How twisted must you be to justify cutting apart kids?

We always hear about how history will judge us normal people when we refuse to give up our cars to please the angry weather goddess or reject the racial hierarchy the left asserts or otherwise defy the communists’ to-do list. But how do you think people in a hundred years – assuming President Crusty and his corps of borderline clinical morons don’t get us nuked over some border dispute in East Whogivesadamnistan – are going to say about this infamy? They are going to talk about us like the primitive ghouls our ruling class betters are.

History, please take note that some of us say “No.”

We say “No” to the idea of chemically ruining or removing perfectly good organs off little kids – or adults – who are suffering from mental illnesses in order to cater to their delusions. If you are a boy and think you are a girl, you are not ‘unfairly burdened’ with a scrotum. You have a mental disorder and you need treatment and compassion. A scalpel is neither treatment nor compassion. It is evil.

Read the heartbreaking stories of the ruined people who “transitioned” – that is, those whose parents either betrayed them by allowing them to be mutilated or those unwell adults who allowed themselves to be talked into it – and who now regret it. It’s the saddest thing in the world. This is not playing dress-up, where you can stop wearing a skirt tomorrow when you come to your senses. This is the permanent alteration of a healthy body into a cruel, misshapen simulacrum of the opposite sex. They are collateral damage in the left’s war on normality.

It must be outlawed and treated as the unholy infamy that it is.

Let’s be clear. This barbarity must be made a felony going forward and future butchers practicing after the ban must be prosecuted and sentenced to long prison terms. Mutilation, whether surgical or chemical, is never a treatment for a mental disorder. Not for kids. Not for adults. Not for anyone.

As for those who have suffered so under the law failing to define this barbarity as criminal, the Constitution bars ex post facto laws, so we cannot retroactively prosecute the butchers. But we can offer some justice. The victims must be able to sue the doctors who performed this kind of butchery for malpractice under current law and let a jury decide if this was okay. And legislatures – after outlawing the procedure – must extend the usually short statute of limitations for medical malpractice to at least 20 years for “gender affirming care” to ensure that those suffering permanent malformation can at least recover some money from the quacks and the institutions that allowed it.

Will the GOP legislatures stand up and do the right thing? Here’s the problem – so many of them are so terrified at the thought of being attacked for speaking out that they won’t do it. They would rather kids keep being mutilated than receive mean tweets on the Twitter machine. Often, it seems that GOP legislators have had their own bottom surgery. For example, the Oklahoma Republicans had a chance to ban this cruelty at one of their hospitals and did not take it. If you can’t say “No” to cutting apart kids, what the hell good are you?

There is no reason that every red state should not criminalize this surgical snake oil, and not just for kids. Adults too. Do not fall for the pseudo-libertarian nonsense of, “Well, they are adults and it is their bodies.” No. Let’s not pretend these are rational decisions made by heathy people. With kids, there’s always some Munchausen mommy driving the train. With adults, these are unwell and desperate people. Their mental illness is real. They really feel they are a different gender, and it is such a profound feeling that they are willing to go under the knife to try to relieve it. But they are not a different gender. Their feelings are real but they are also wrong. It is not compassion to pretend otherwise. They need to be treated compassionately, not to have someone try to brutally sculpt their body into a cruel imitation of their false self-image.

They say we hate trans people. That is a lie. We love them enough to want them to have all the mental health care they need to either cure them or help them live with their disorder. And it is a disorder. We must say so loudly and without equivocation. Males with it are not females, or vice versa, who are somehow “trapped in the wrong body.” Stupid clichés like that do not change the reality. The delusion created by their disorder is not real, and you cannot cut them into something approximating their false self-image. We need to speak those truths loudly and clearly.

The most vulnerable among us – both children and adults – have become a weapon for a left that sees their pain as a way to attack the foundations of society by this transgressive nonsense. The gender crap and CRT nonsense we see in places like schools are part of the same culture war offensive. Remember, to the left mutilation is a political statement, a demonstration of their commitment. They say, “Look what we will do in the pursuit of our objectives!” and then they pull out some bewildered teenage girl with a long Frankenstein scar across her chest where her breasts used to be and ask us to join in the applause. But the applause they seek is for themselves, because they have suppressed their own humanity so completely in the service of their Marxist Moloch that they are willing to allow this abomination.

Enough of this shame on our society. Outlaw this barbarism. Allow the victims of gender phrenology to at least sue their tormentors. Republicans, this is the hill to fight on, and, not to die on, but to win on. If you GOP pols can’t sell the electorate on an anti-mutilation platform, time to for you to get a new gig.

Sometimes something is so wrong it’s almost hard to comprehend it. Your mind rebels at the enormity of the evil. Sadly, our trash elite has nearly managed to normalize this atrocity. But think back to an earlier time, like if someone twenty years ago had told you, “Hey, why don’t we allow children to have their breasts and genitals cut off because they feel like they are the opposite sex. Sound good?” You would drop a butterfly net over his head and drag him to the nearest booby hatch. You certainly would not nod along saying, “Yes, what a good idea.”

React like you would have reacted then, because the America of 20 years ago was right and this America, for tolerating this mutilation of the vulnerable, is beyond wrong.