Because all of his slavish minions
are about to be hanged live
on the Internet—THAT’S WHY!!!

Really, these mother WEFers lock us down, force us to wear face diapers, close off the beaches so we can’t recover, shut down our businesses, close down the schools, coerce us to social distance/shelter-in-place/isolate ourselves/quarantine our families, order us to stop walking and exercising in public places, prevent us from visiting infirm and/or dying loved ones in every kind of care facilities and, on top of all that, cancel holidays and reunions, anniversary and birthday celebrations, weddings and funerals, baptisms and bar mitvahs, etc.

Then they outlaw virtually every effective COVID-19 remedy in Creation, making it impossible for extremely sick people to self care and forcing them into the hospital (aka Covid killing factories).  That’s right, the Medical Mafia quickly took over every single hospital and medical center, urgent care facility and walk-in clinic in the country and stifled any Covid protocol that might work.  Ditto that for every nursing home, assisted living facility, memory unit, and all independent living and care home institutions.  What’s worse, the so-called doctors force-fed the powerless patients extremely toxic pharmaceutical drugs such as Remdesivir until they got so ill they needed a ventilator.  Who doesn’t now know how fast the many misdiagnosed Covid patients died from medically dangerous venting?!

NOW YOU KNOW WHY THEY NEED AMNESTY ! ! !

It’s called MEDICIDE, which is murder by medical weaponry used by your physician.  It’s also known as MURDER ONE, as in “murder in the first degree”.

BOY, DO THEY ALL NEED AMNESTY … AND FAST!

Next, the same Covid criminals roll out their COVID-19 clotshots and killshots, with no meaningful or adequate testing, and then they mandated the exceedingly dangerous and deadly injections for practically every person on the planet. 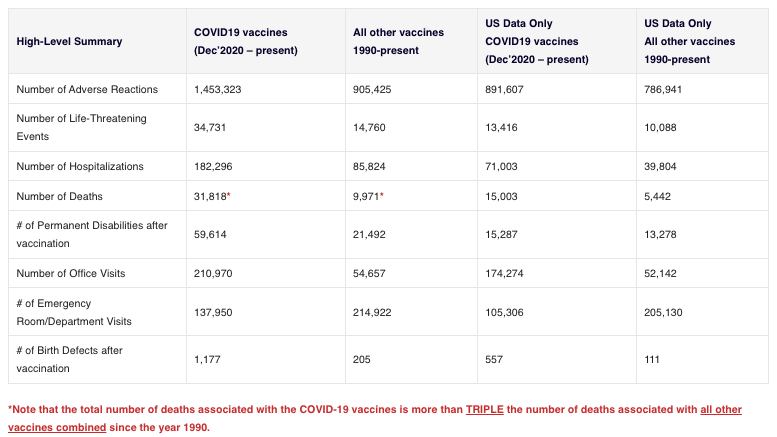 The third key data point is 891,607.  That’s the “number of Adverse Reactions” in the USA after taking the Covid jab.

Once again, that statistic could be as high as 8,916,070 ADVERSE REACTIONS or even much higher than that.

KEY POINTS: The Atlantic article linked below should be read in its entirety to fully appreciate this screed.  The deceitful claim repeatedly made by the author is that everything that went wrong during the highly choreographed Plandemic was unintentional.  In other words, Emily Oster asserts that there was no “mens rea” in the commission of the Covid crime spree by the massive network of Covid criminal co-conspirators.  It’s as though the world never faced a similar pandemic going back to the 1918 Spanish Flu Pandemic.  Her extremely disingenuous take on this deliberate depopulation scheme can only be explained as a Khazarian-contracted presstitute getting paid big bucks to profoundly mislead the country.  In this regard, Oster just made herself a witting accomplice in the Covid criminal cover-up. 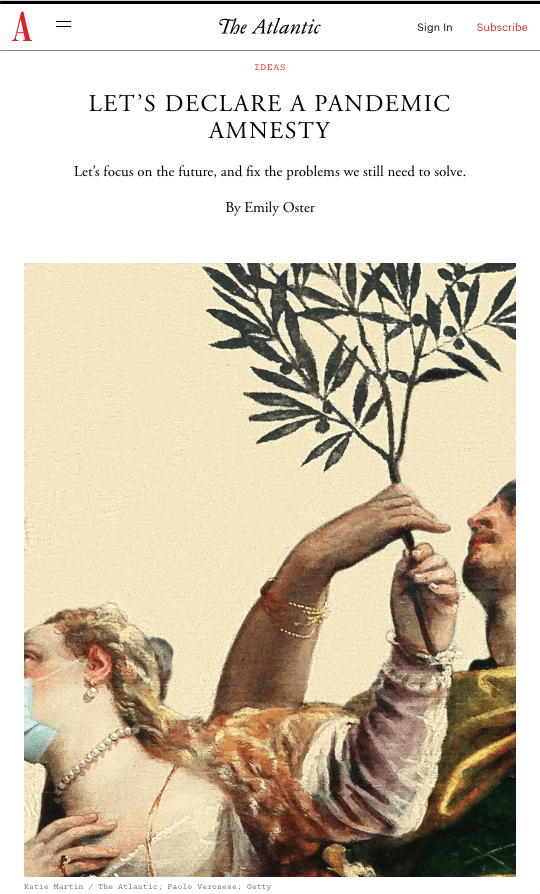 So, the “Father if Lies” wants every dead and injured American to simply forget that his Khazarian henchmen carried out such a homicidal capital crime wave that is still rolling over this nation.

So, it’s important to understand that not even the top tier of the Khazarian Cabal ever moves right or left until they have been so ordered by their Father of Lies.  Even President Putin recently and quite aptly memed the Zio-Anglo-American Axis the “Empire of Lies” whose implied leader is none other than Satan—the Father of Lies.  Hasn’t the United States of America been labelled “The Great Satan” by various oppressed peoples over many decades?  Think about that!

The BOTTOM LINE here is that floating any idea, which even remotely suggests the enactment of a “Pandemic Amnesty” to grant immunity to all governmental tyrants and corporate criminals, is obviously a last ditch effort.  And that’s a very good thing.  For it reveals that Satan is now willing to sacrifice his many Covid criminals and corruptocrats on the altar of his own survival.

While Satan is the Father of Lies, it appears that he does know when he can no longer lie his way out of what is arguably the most genocidal campaign of falsehoods in human history.  After all, folks everywhere have become aware of his attempt to forever destroy the Christian nations and to exterminate their peoples via the Covid Super Vaccination Agenda.  How does he really fix that … except by way of permitting “an eye for an eye and a tooth for a tooth”, against his own Khazarian minions.

Truly, the end is nigh for the ever-brazen and exceedingly dangerous Khazarian Cabal.  It seems that the Khazarians have just committed the greatest overreach in recorded history; and many of them will finally pay for their heinous crimes.

That the Khazarian Crazymakers want US to “forgive and forget” their ongoing genocide against the American Republic, even as they hard sell their fatal CV19 vaccine bioweapons daily, is the very height of chutzpah.  For only an incorrigible cabal of criminally insane psychopaths would ever try to pull off such a crazy global crime spree that really amounts to full-scale ELE*. 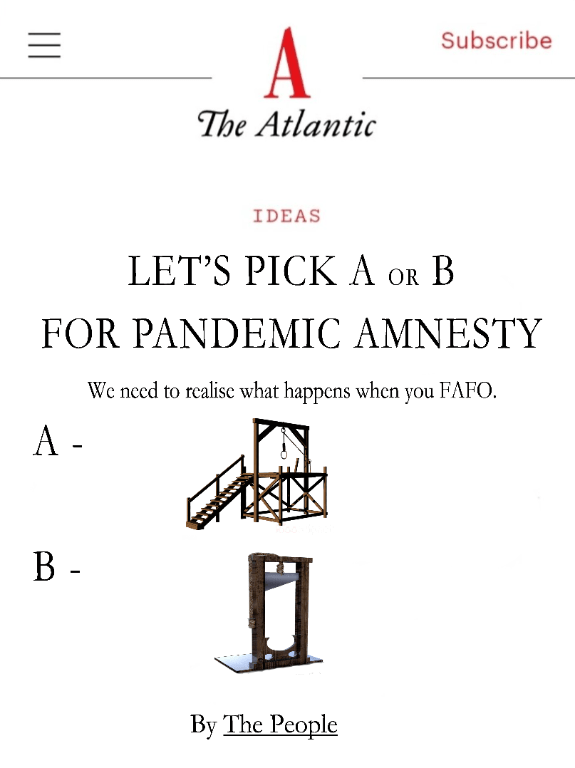 SOTN Editor’s Note: It’s quite noteworthy (and newsworthy) that Emily Oster’s article first appeared in The Atlantic on Monday, October 31, which qualifies it as a rather lackluster October Surprise.  Her daffy “last ditch effort” was obviously a desperate reaction — JUST 7 DAYS BFEORE THE MIDTERM ELECTIONS — to the swiftly rising red tidal wave rolling across the USA.  After all, the tyrannical Pandemic response was, by and large, a highly coordinated Democrat black operation overseen by the U.S. Intelligence Community and facilitated by the U.S. Military (Operation Warp Speed was headed by United States Army Four-Star General Gustave F. Perna).  The globalist-run DNC knows that both the House and Senate will be controlled by Republicans in January of 2023; hence, they floated the “Pandemic Amnesty” trial balloon to somehow exonerate the mostly Democrat Plandemic perps across all levels of government—municipal, county, state and federal.  The great news is that this face-saving Khazarian CON JOB has been swiftly harpooned by almost everyone on and off the Internet. See: “Pandemic Amnesty” Psyop Totally Torn Apart Across the Internet