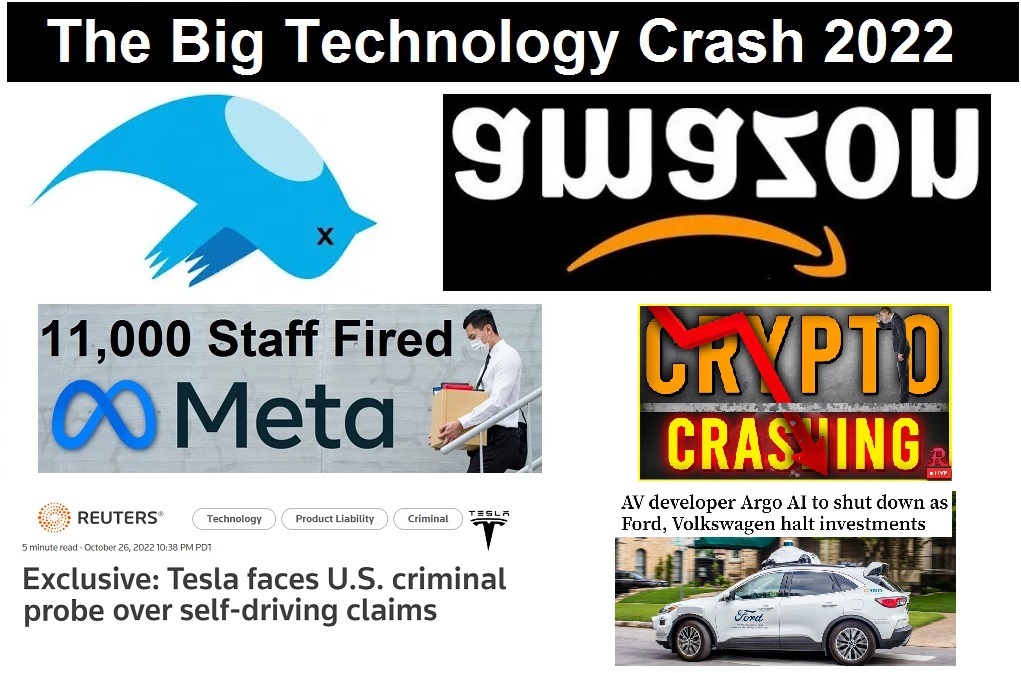 I don’t think the technocrats will be developing any “transhumans” anytime soon.

On Wednesday this week, Amazon.com became the first publicly traded company in history to lose $1 trillion in market valuation.

And then yesterday afternoon, Elon Musk told employees of Twitter at an “all-hands meeting” that the company is losing so much money that “bankruptcy is not out of the question.” (Source.)

All of this happened after the great cryptocurrency collapse of Tuesday, when the equivalent of a “bank run” happened when crypto exchange FTX saw $6 billion of withdrawals in a 72-hour span, resulting in them stopping the process of withdrawals. See:

FTX has now declared bankruptcy, and its owner, who was once compared to Warren Buffet, now is looking at possible time in prison and poverty, leaving those who had invested in cryptocurrencies and FTX scrambling to recover, including Miami-Dade County which made a 19-year $90 million agreement with FTX for naming rights to its downtown arena where the NBA team Miami Heat plays. (Source.) And last night, Crypto lending platform BlockFi announced it was halting withdrawals in the wake of the collapse of crypto exchange FTX. (Source.)

The other Big Tech news on Tuesday was that Facebook parent company Meta announced it is slashing more than 11,000 jobs, reducing its workforce by about 13 percent. (Source.)

This follows news that we reported about 2 weeks ago that the Department of Justice has started a probe into Tesla over their claims of having a “self-driving car.” At about the same time this news was reported, Ford and Volkswagen announced that they were halting further investments into AI self-driving vehicles, forcing Argo AI, an AV technology startup founded by Uber and Google veterans, to shut down. See:

Completely autonomous self-driving cars has always been a fantasy, and for those who were foolish enough to invest $billions into this fantasy, the realities and limitations are crashing down now with reports like the one ZeroHedge News covered this week, highlighting a study that showed lasers can hack self-driving sensors, preventing vehicles from seeing pedestrians.

Researchers in the U.S. and Japan found that vehicles could be tricked into not seeing pedestrians (or other objects in their way) using lasers. These cars, which use LiDAR to sense objects around them, send out laser lights and then use the reflection back to judge how far away objects are.

The study revealed that a perfectly timed laser shone back into a LiDAR system can create “a blind spot large enough to hide an object like a pedestrian,” according to Cosmos. (Source.)

The largest technology company of all them, and one of the largest companies in the world, Apple Computers, is also facing trouble due to their dependency on manufacturing in China and China’s ZERO Covid policy which has hurt their operations and manufacturing of their top product, the iPhone. (Source.)

The Big Technology Crash of 2022 has started, and it will probably make the Dot-com stock market crash of 2001 look like a walk in the park when this crash hits bottom.

If you are too young to remember the Dot-com crash 20 years ago, here is a review of what happened:

The dotcom bubble was a rapid rise in U.S. technology stock equity valuations fueled by investments in Internet-based companies during the bull market in the late 1990s. The value of equity markets grew exponentially during this period, with the technology-dominated Nasdaq index rising from under 1,000 to more than 5,000 between the years 1995 and 2000. Things started to change in 2000, and the bubble burst between 2001 and 2002 with equities entering a bear market.

By the end of 2001, most dotcom stocks went bust. Even the share prices of blue-chip technology stocks like Cisco, Intel, and Oracle lost more than 80% of their value. It would take 15 years for the Nasdaq to regain its peak, which it did on April 24, 2015.

The dotcom bubble, also known as the Internet bubble, grew out of a combination of the presence of speculative or fad-based investing, the abundance of venture capital funding for startups, and the failure of dotcoms to turn a profit. Investors poured money into Internet startups during the 1990s hoping they would one day become profitable. Many investors and venture capitalists abandoned a cautious approach for fear of not being able to cash in on the growing use of the Internet.

With capital markets throwing money at the sector, start-ups were in a race to quickly get big. Companies without any proprietary technology abandoned fiscal responsibility. They spent a fortune on marketing to establish brands that would set them apart from the competition. Some start-ups spent as much as 90% of their budget on advertising.

Record amounts of capital started flowing into the Nasdaq in 1997. By 1999, 39% of all venture capital investments were going to Internet companies. That year, most of the 457 initial public offerings (IPOs) were related to Internet companies, followed by 91 in the first quarter of 2000 alone.

The high-water mark was the AOL Time Warner megamerger in January 2000, which became the biggest merger failure in history.

How the Dotcom Bubble Burst

The 1990s was a period of rapid technological advancement in many areas. But it was the commercialization of the Internet that led to the greatest expansion of capital growth the country ever saw. Although high-tech standard-bearers, such as Intel, Cisco, and Oracle, were driving organic growth in the technology sector, it was upstart dotcom companies that fueled the stock market surge that began in 1995.

The bubble that formed over the next five years was fed by cheap money, easy capital, market overconfidence, and pure speculation. Venture capitalists anxious to find the next big score freely invested in any company with a “.com” after its name. Valuations were based on earnings and profits that would not occur for several years if the business model actually worked, and investors were all too willing to overlook traditional fundamentals.

Companies that had yet to generate revenue, profits, and, in some cases, a finished product, went to market with IPOs that saw their stock prices triple and quadruple in one day, creating a feeding frenzy for investors.

The Nasdaq index peaked on March 10, 2000, at 5048—nearly double over the prior year. Several of the leading high-tech companies, such as Dell and Cisco, placed huge sell orders on their stocks when the market peaked, sparking panic selling among investors. Within a few weeks, the stock market lost 10% of its value.

I lived through the 2001 Dot-com stock market crash. Not only did I live through it, I started my own .com company during that time, TropicalTraditions.com, which today is HealthyTraditions.com and still operating. We celebrated our 20-year anniversary earlier this year:

We were one of the first Internet companies to start selling food on the Internet, and I clearly remember that our #1 challenge back then was to convince the consumer that it was safe to purchase on the Internet, as it was still in its infancy. We leveraged the power of the emerging technology to take our message and our products directly to the consumer.

We broke ground in many areas, being one of the first to ship glass without bubble wrap, and ship frozen meats without conventional Styrofoam, using a corn-based product that is fully biodegradable. We even shipped eggs directly to consumers using specially designed boxes that had no plastic or Styrofoam.

As the success of our products grew among consumers, especially coconut oil, many big names tried to buy us out, but their goals were strictly financial as they wanted to “scale” the business. They didn’t understand that this was not the kind of business that can be “scaled” simply by investing capital, but that it could only be “scaled” by getting more small-scale producers to start producing food the traditional way, without modern technology.

That kind of “scaling” required more human labor, not technology, and time to train such labor to produce food the traditional way, and nobody was interested in that.

I never took on investors, and I never took on debt, building the business the “old fashioned” way by simply reinvesting profits, being 100% dependent upon our customers and their demand for our products, and not Wall Street or government money.

So they tried to destroy us instead, leveraging the FDA and the IRS, but we prevailed.

Tragically, the business model almost all technology companies follow today has not changed from what got them into trouble during the Dot-com market crash in the early 2000s. Wild speculation and a false belief in what the technology can actually do has drawn in massive amounts of money by investors looking to get rich quick, and it has created a financial atmosphere that is crashing once again, but this time it will be far worse.

While the Dot-com market crash happened during the technology’s infancy, giving time for investors to regroup and adjust, this time it is happening during technology’s sunset years, as the techno-prophecies and false promises of what the technology can do, all come crashing down.

Fully autonomous self-driving cars, robots that can replace humans, and new breeds of “transhumans” integrating technology with human beings, are all fantasy developed over the years by Hollywood science fiction writers, that have no basis in reality.

And for much of the technology that does exist, it has been driven by top down financing, much of it government financing, and not market results, so it is not sustainable.

For example, governments mandating that everyone start driving battery powered cars by a certain date does not take into account that based on a recent report published in Finland, the world does not have enough lithium and cobalt to replace batteries every 10 years. (Source.) Not to mention that all those electric vehicles are primarily powered by the electrical grid which could never handle the increase in EVs plugged into it.

And with decades of government subsidies creating a solar panel market, we now know that there is a huge environmental problem with disposing of old solar panels once they wear out, that nobody considered when the “solar revolution” started, as these solar panels contain toxic materials that now end up in landfills. (Source.)

Welcome to the Big Technology Crash of 2022. The game’s over, the show has finished, and it is time now to prepare for the post-technological era.

That doesn’t mean that the technology will all go away and we will return to the “dark ages.” I am pro-technology myself, and have an EV car that I charge off of my own solar system, not the grid, as a backup should it be cost prohibitive or impossible to purchase fuel. It allows me to be more independent from “the system.” I have also earned my living, and supplied many jobs to others, by utilizing the technology.

What the “post-technological age” means is that the economic realities are now crashing down on the false techno-prophecies, and a more sustainable economic system is going to be necessary that encourages, rather than punishes, innovation and more local, decentralized systems that are not technology dependent.

For that to happen, of course, means that the Globalists will lose much of their power and control, and that will be 100% dependent upon the American people going forward as we face the “Great Reset.”